Out in the World: Arrests made in Mexican lesbian couple's killing 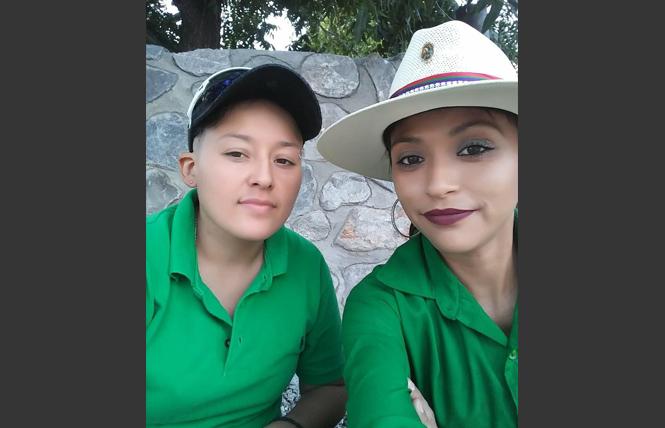 Authorities in the Mexican state of Chihuahua have arrested two people in connection with the killing of a lesbian couple in the city of Juarez. The swift action comes as the state launched a new law enforcement unit specializing in crimes against women.

Juarez, the Mexican border town across from El Paso, Texas, has long been plagued by an unusually high murder rate and other incidents of violence against women. Cases can go unsolved for decades.

On January 24, officers from Chihuahua's newly formed Crime Against Women Unit arrested a man and a woman, identified only as David R., 24, and Jacqueline Isela C.R., 25, in connection with the January 15 killings of newlyweds Nohemi Medina Martinez and Tania Montes Hernandez, who was also known as Yulisa Ramirez on social media.

Authorities only released the suspects' first names and initials of their last names, under Mexican law, reported the El Paso Times.

According to the Border Report, the unit obtained a warrant to search the premises of a house where the killings of the couple happened and the officers allegedly found evidence at the crime scene. They immediately arrested the suspects and charged them with feminicide, a hate crime enhancement for targeting women for violent acts based on their gender.

The new unit is part of Chihuahua's $3.5 million building for the new specialized prosecutor for women. The new agency and building opened nearly six months ago and houses the unit, which is staffed with eight detectives and 15 prosecutors tasked with clearing a backlog of more than 200 cases.

According to reports, C.R. confessed that she lured the two women to a rural house in San Isidro, east of Juarez, on January 15. There, she and David R. allegedly shot and mutilated the lesbian couple. Hours later they allegedly put the dead women's bodies into bags and spread their remains along the Juarez-Porvenir Highway, where police discovered them early in the morning January 16.

Hernandez and Martinez, both 28, married in July 2021. They had three children. The Juarez couple often crossed the U.S.-Mexico border to visit family in El Paso. Family members reported the couple missing before authorities found them.

Last week, Chihuahua Attorney General Roberto Fierro denied the women's killings were a hate crime. Fierro originally believed the women's deaths had to do with their "economic activities and individuals they associated with," he told reporters at a January 18 news conference.

Oscar Martínez, a spokesperson for the AG's office, did not elaborate any further, telling reporters the matter was an open investigation. Officials remained tight-lipped about the reason for the lesbian couple's murder in a January 24 news release following the suspects' arrest.

The office only stated in the release that more information would be forthcoming, to ensure "complete transparency in the procurement of justice."

The organization expressed the "brutality of the killings clearly indicated they were hate crimes," in a statement in Spanish and translated by Google Translate posted on the organization's Facebook page.

Plagued border town
The suspects' arrest is good news for women and the LGBTQ community of Juarez. The community has fought for decades for authorities to properly investigate and prosecute hundreds of murders of women and LGBTQ people, to no avail.

Since the early-1990s activists and academics have worked to

Out in the World: A Wider Bridge celebrates 10-year anniversary

Out in the World: Hong Kong lesbian pop star Denise Ho out on bail after arrest
Sign up!