Reported SF hate crimes against AAPIs, LGBTQs were up in 2021 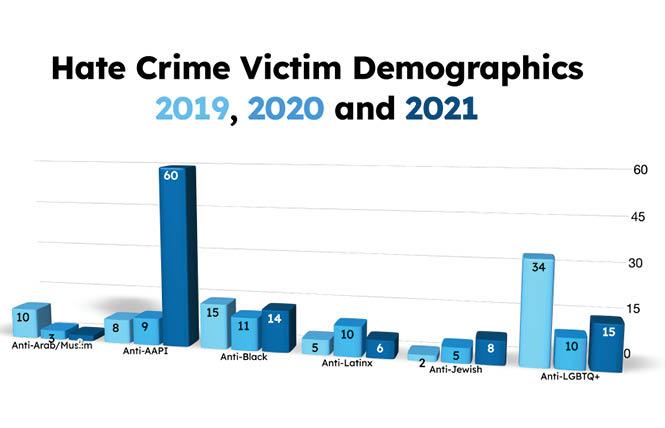 While most mainstream media attention focused on the massive increase in hate crimes against Asian American and Pacific Islanders in San Francisco last year, the numbers were also up a striking 50% for LGBTQs, the police department reported January 25.

Reported anti-LGBTQ hate crimes in San Francisco were up 50% in 2021 over the prior year, according to preliminary numbers released by the department.

In a chart of preliminary hate crime statistics, the San Francisco Police Department had 15 listed anti-LGBTQ hate crimes in 2021, compared to 10 in 2020. Both numbers are down from 34 in 2019.

Prior years and a breakdown of whether the crimes targeted people for being lesbian, gay, bisexual, transgender, or queer were not made available in the chart.

LGBTQs were the second most-targeted group, behind Asian American Pacific Islanders — who saw a dramatic spike. There were 60 reported anti-AAPI hate crimes in 2021 compared with nine in 2020: a rise of 567%.

Police Chief William Scott said that "the number of hate crimes targeting members of our AAPI communities is alarming," but urged confidence in the SFPD.

"It's important to remember that San Francisco police officers have made arrests in the majority of these cases," Scott stated. "In fact, one perpetrator investigated and arrested by our Taraval Neighborhood Team was charged with 31 hate crime enhancements alone — more than half of last year's cases. Hate crimes represent one of SFPD's highest clearance rates for any crime category, and we hope that sends a forceful message to would-be hate criminals considering any kind of bias-motivated attack in our city — San Francisco will hold you accountable."

Last year it was California Attorney General Rob Bonta, who is Filipino himself, who was sounding the alarm, as the B.A.R. reported at the time. Bonta had blamed the COVID-19 pandemic for the rise in hate crimes, calling racism an "epidemic" in itself. Former President Donald Trump employed a number of racist anti-Asian nicknames for the disease, which originated in China.

The SFPD did not respond to an immediate request for comment asking about the rise in anti-LGBTQ hate crimes.