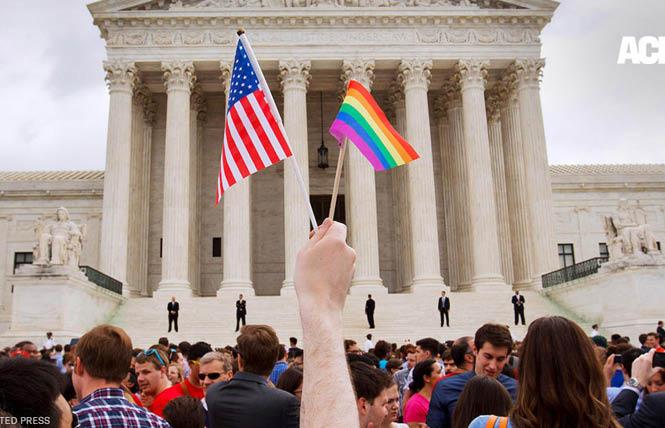 LGBTQ civil rights may indeed be threatened by abortion cases now before the conservative-heavy U.S. Supreme Court. Along with abortion rights, the right to marry whomever we want, to have sex in any manner and with whomever (consenting adult!) we like, to use a condom or other protection or birth control, and to have gender-affirming surgery also may be at risk.

Until recently, it seemed it had been many years since our most basic rights were being debated in the U.S. Supreme Court. Not anymore. Abortion rights are under attack in a way they have not been for decades, and federal courts journalist Lisa Keen told Out in the Bay — Queer Radio + Podcast guest host Christopher Beale this week that those attacks also jeopardize LGBTQ rights.

Keen said, "personal bodily integrity" is what's on the line. It's a term we may hear a lot more this year.

In December, the justices heard arguments in Dobbs v. Jackson Women's Health over a Mississippi law that bans abortion after just 15 weeks of pregnancy. Many legal observers believe the court's conservative 6-3 majority, in a ruling expected by June 30, could undercut the precedents set in Roe v. Wade and Casey v. Planned Parenthood, the 1973 and 1992 decisions that have upheld the right to abortion.

"If it becomes OK for states to say whether or not a woman must carry her pregnancy to term whether she wants to or not, whether it threatens her life or not," said Keen, "then it doesn't seem at all far-fetched for the court to say it's OK for states to regulate other very personal decisions concerning one's bodily integrity ... who you have sex with, whether you choose to have your uterus or breasts removed, whether you request transition surgery, or use PrEP or use a condom."

Keen is national politics and legal affairs correspondent for the Bay Area Reporter and other LGBTQ publications nationwide. She gave Out in the Bay her expert analysis of abortion cases and of other cases directly attacking LGBTQ rights.

"We're seeing a lot of things percolating on efforts to ban gay books from libraries, ban them from schools, again based on religious reasons," Keen said. There are also efforts "to ban the use of bathrooms and locker rooms by students who are transitioning ... even attempts by teachers refusing to address a student by the student's preferred pronoun or name, saying their religious beliefs require that they refuse to respect the student in that way."

Those are in addition to cases "already in the pipeline challenging the right of trans women to participate in women's sports competitions. I think all of these are headed for the Supreme Court," said Keen.

Christopher J. Beale is a queer independent radio host, producer and journalist based in San Francisco. He also produces and hosts the Stereotypes podcast. Eric Jansen is founding host and managing producer of Out in the Bay — Queer Radio from San Francisco. Learn more and listen at https://www.outinthebay.org/

Out in the Bay: Marilyn Mitchell melds life, politics on new rock album
Sign up!