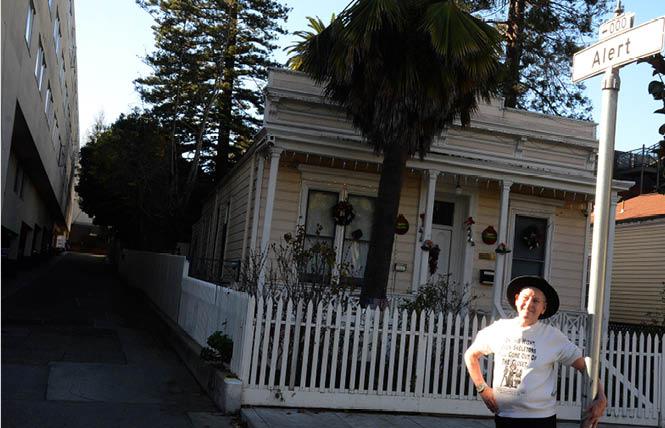 An apartment at 272 Dolores Street was the birthplace on Easter weekend in 1979 of the Sisters of Perpetual Indulgence. Now a nearby alley could be renamed in honor of one of the founders of the internationally beloved drag nun charitable group.

Gay District 8 Supervisor Rafael Mandelman, who represents the Mission Dolores neighborhood, is proposing a ceremonial name change for Alert Alley, which runs between Dolores and Landers streets, so it is also known as "Sister Vish-Knew Way." It is derived from one of the names that founding Sister Kenneth Bunch has gone by over the years.

Ordained the group's Grand Mother Vicious Power Hungry Bitch, Bunch shortened it to Sister Vish-Knew so his name wasn't so long or sounded as harsh. The second half came about from repeatedly being asked if he knew the Sisters would have such longevity when he helped found them so many decades ago.

"I wanted to soften my image up," Bunch explained in a phone interview with the Bay Area Reporter. "People always ask me, 'Did you think the sisterhood would last this long and spread this far?' So I changed my name to Vish-Knew."

It is also an homage to the Hindu god Vishnu. Early on Bunch was called Sister Ady in reference to Ardhanarishvara, which is a form of the Hindu deity Shiva combined with his consort Parvati. They are usually depicted as half-male and half-female.

"Before nonbinary became a thing," noted Bunch, who as a 25-year-old gay man first came to San Francisco on vacation in January 1977 and decided to relocate to the City-by-the-Bay permanently from the gay-owned farm he had been living on outside Iowa City.

"You know that mythical idea of someone who went on vacation and stayed? Well that happened to me. I came here on vacation in 1977 and stayed; well, I went back for my clothes," recalled Bunch, 69. "That's when I grabbed the nuns' habits just in case I got bored, and we got bored."

Bunch and several friends had gotten together at the Dolores Street residence the day prior to Easter in 1979 and ended up donning the religious garb and heading out into the city. It was the first public unveiling of the Sisters, which today has orders in 60 different cities and 14 countries.

"We call it Holy Saturday," said Bunch, who for nearly 36 years has lived nearby Alert Alley on Dolores Street.

His friend and fellow drag nun Sister Roma, who just was elected the local order's Mistress of Novices to assist new aspirants, first broached the idea of naming a street in honor of Bunch last June. As far as Roma and Bunch are aware, no member of the Sisters has a street named after them anywhere on the globe.

"That is one of the reasons I really wanted to do this," Roma, who joined the local order in 1987, told the B.A.R. "I feel the Sisters are really a grassroots volunteer organization of activists and compassionate caregivers who have changed the world. I look around and I see people who are very deserving get their roses, get their accolades like Marsha P. Johnson, José Sarria, and Harvey Milk."

Roma wanted to particularly honor Bunch because of his "relentless" commitment to the Sisters over the last nearly five decades.

"Not to diminish the work of the other co-founders, but Sister Vish really is the OG of the Sisters," said Roma.

Bunch joked that he initially told Roma he wanted the street naming to be somewhere in the city's Tenderloin district "frequented by lots of prostitutes and covered in lots of used condoms. She said, 'It is already taken.'" 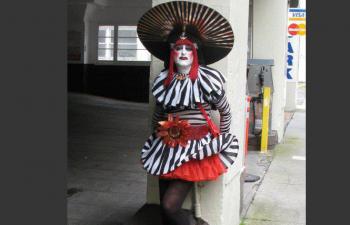 Geographical irony
In a bit of geographical irony Alert Alley is a short walk from the Archdiocese of San Francisco's Mission Dolores Basilica and the historic Misión San Francisco de Asís. Local Roman Catholic Church leaders throughout the decades have clashed with the Sisters, calling them heretics and famously protesting their being given a permit to close down Castro Street on Easter Sunday in 1999 to celebrate their 20th anniversary.

"Proximity can be both a blessing and a curse, depending on how you look at it," said Roma.

Mandelman signed on to the effort and introduced a resolution in support of the commemorative street naming at the Board of Supervisors January 11 meeting. It will first need to be heard in committee before being voted on by the supervisors, likely sometime in February.

"I can think of few organizations that have got the cultural impact and done more to advance the cause of queer liberation over the last four decades than the Sisters. They have been at the forefront and at the barricades fighting for us that entire time, and they have done it with style, grace, and humor," said Mandelman. "Sister Vish-Knew was there at the start and got this movement going, and has remained with it throughout the entire time. She seemed like a terrific person to honor and very well deserving."

As for the location of the alley, Mandelman noted it is near where not only Bunch lives but also the Dolores Street Community Services' HIV/AIDS care hospice that opened in the mid-1980s.

"We didn't put it there to poke the Catholic Church in the eye," he said. "It is perhaps an appropriate irony."

In addition to his helping to birth the Sisters, Bunch has played a prominent role in various chapters of LGBTQ history. He and fellow activist Tracy Bjorgum in 1976 were the first men to apply for a same-sex marriage license in Iowa, generating newspaper headlines across the Hawkeye State.

Two years prior Bunch helped publish the first issue of the Radical Faerie magazine RFD from the attic of his Iowa home. In 1974 he also produced the first Midwest Gay Pride Conference at the University of Iowa.

He marched alongside Milk, San Francisco's first gay supervisor, protesting anti-LGBTQ laws in 1977. Two years later Bunch was among the demonstrators outside of City Hall taking part in the White Night riots protest of the lenient verdict handed down to Dan White for assassinating Milk and then-mayor George Moscone in 1978.

"I won't say what I did," said Bunch. "There were a lot of police cars burning that night; I don't know why."

For five years in the early 1990s Bunch helped produce the first Halloween in the Castro event with the Sisters and raised hundreds of thousands of dollars shared with the event partners Community United Against Violence and the San Francisco Gay Men's Chorus. He also is credited with being the first person to demand, at the 1993 Creating Change Conference, the inclusion of transgender issues and speakers at the LGBTQ events the March on Washington and the Stonewall 25th anniversary.

The street naming for Bunch will purposefully be a ceremonial one, meaning the residents of the alley will not have to officially update their addresses. If approved, the city would erect new street signs on the alley that have both its honorary and existing names for it.

Roma told the B.A.R. they support going the ceremonial route "because it is easier on the community members who live on that street. We don't want to draw it out and turn it into a huge thing that requires public input. We just want to see Sister Vish gets the recognition she greatly deserves."

The process is usually less controversial, as the only cost involved is borne by the city for the new street signs. Other honorary street names the city has approved in recognition of the LGBTQ community include Gene Compton's Cafeteria Way on the 100 block of Taylor Street for the business where a transgender-led uprising against police brutality occurred in 1966 and Vicki Mar Lane along the 100 block of Turk Street for trans performer Vicki Marlane, who died in 2011 at the age of 76 due to AIDS-related complications.

Other street names honoring LGBTQ individuals include José Sarria Court along the block of 16th Street where the Eureka Valley/Harvey Milk Memorial Branch Library is located; Frida Kahlo Way fronting City College of San Francisco; Dr. Tom Waddell Place and Alice B. Toklas Place, both of which are close to City Hall; and Jack Kerouac Alley in North Beach.

Mandelman told the B.A.R. going the ceremonial route is not only easier but also quicker, as the intention is to unveil the new street signs Saturday, April 16, the day prior to Easter Sunday this year. He likened it to how the city in 2018 christened the block of Mason Street in front of the Fairmont Hotel as "Tony Bennett Way" in honor of the singer.

He expects to have unanimous support from his board colleagues for "Sister Vish-Knew Way."

"I cannot imagine that any of my colleagues would push back on this. I would be shocked and horrified and very upset if any of them did," said Mandelman. "I don't think they will; I think it will be non-controversial. That in itself is a statement of the impact the Sisters have had."