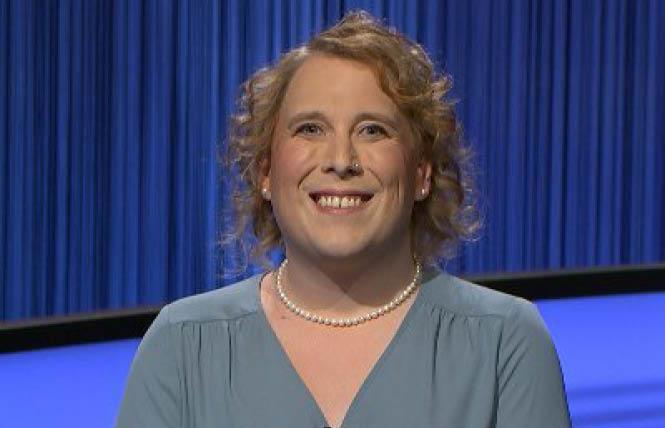 Amy Schneider became the first woman to pass $1 million on "Jeopardy!" in the episode that aired January 7, solidifying her reign as the highest-scoring trans contestant in the syndicated game show's history.

"It feels amazing, it feels strange," Schneider stated in a news release. "It's not a sum of money I ever anticipated would be associated with my name." (Schneider's representatives did not respond to a Bay Area Reporter interview request.)

Nick Adams, the director of transgender representation for GLAAD, stated that Schneider's streak is a breakthrough for trans women in media around the country.

"Amy Schneider's incredible run on 'Jeopardy!' allows families all over the country to get to know her as someone who is great at word puzzles, has in-depth knowledge on a range of topics, and who also happens to be a transgender woman," Adams stated. "Amy is using her history-making appearances and new platform to raise awareness of transgender issues and share a bit of her personal story too."

Schneider, who lives in Oakland, was recognized with a shout-out at the Golden State Warriors game in San Francisco January 9. The longtime Warriors fan told KGO-TV it was her first time at the Chase Center, which started hosting the team in the 2019 season.

"It is unbelievable I hadn't made it to the Chase Center yet with the pandemic and I've been wanting to, coming on this day has just been amazing," she told the station.

Schneider's week wasn't all good, however — she was the reported victim of an armed robbery January 2, she stated.

Shortly after 3:30 p.m., on the 200 block of Lenox Avenue (near Lake Merritt), "two unknown individuals, one with a firearm, approached the victim and demanded the victim's property," according to Oakland Police. "The victim complied, and the individuals ran off with the victim's personal belongings."

On Twitter, Schneider stated she was robbed of her ID, credit cards, and phone but that otherwise she was "fine."

Hi all! So, first off: I'm fine. But I got robbed yesterday, lost my ID, credit cards, and phone. I then couldn't really sleep last night, and have been dragging myself around all day trying to replace everything.— Amy Schneider (@Jeopardamy) January 4, 2022

Another LGBTQ Bay Area contestant also recently appeared on "Jeopardy!" as the B.A.R. reported. San Francisco filmmaker Peter Stein, a gay man, was featured on the program October 28 but finished in third place, as J reported.

'Jeopardy!' champ Schneider to appear in SF
Sign up!