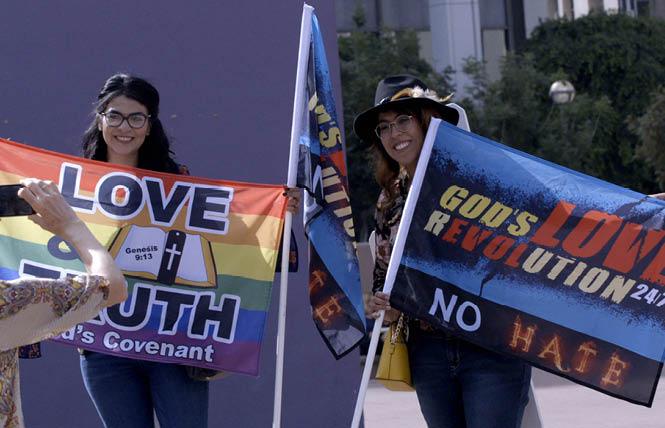 Despite clear evidence that conversion therapy does not work and actually harms LGBTQ people — with high rates of serious mental health issues — the practice of attempting to conform one's sexual orientation or gender identity to societal expectations continues in the U.S. and overseas. An estimated 700,000 U.S. adults have undergone conversion therapy with sometimes fatal consequences.

Yet there is progress against the practice. Many former leaders of so-called ex-gay groups, after finally accepting their own queerness, now speak out against conversion therapy. Since 2012, 20 states and 130-some U.S. municipalities have banned the practice — at least on minors, as California does — and Canada's nationwide ban takes effect January 7.

On this week's Out in the Bay radio and podcast, Kristine Stolakis and Mathew Shurka share their personal experiences, the challenges conversion therapy survivors face, and the work they're engaged in to eliminate the practice.

Stolakis directed and produced "Pray Away," a Netflix documentary inspired by her uncle's experience that takes viewers inside the history and continuation of the "pray the gay away" movement.

"My uncle went through conversion therapy when he came out as transgender as a child," said Stolakis, "when every therapist was a conversion therapist," before the American Psychiatric Association stated in 1973 that it would stop considering homosexuality a mental illness.

Her uncle's belief "that to be trans was both a sickness and a sin stuck with him way beyond his time sitting across the table from a licensed therapist," Stolakis told Out in the Bay. He endured a "lifetime of mental health challenges" that she now knows are common for people in conversion therapy, including depression, anxiety, drug and alcohol addiction, and suicidality.

Researching "Pray Away," she found that "the vast majority of people who run conversion therapy organizations are actually LGBTQ folks themselves who claim that they have changed. It's a movement of hurt people hurting other people, of internalized homophobia and transphobia wielded outward."

In a "Pray Away" scene, Julie Rodgers reads from the draft of her now-published book "Outlove: A Queer Christian Survival Story":

"The first time I burned myself, I was sitting on a curb outside of the church after a 'Living Hope' meeting. As my cigarette burned low, without giving it much thought, I shoved the burning end of it into my shoulder and listened as the skin on my left arm sizzled."

He said that even though Exodus International, then the largest conversion organization, shut its doors in 2013, the ex-gay movement is still strong thanks to social media.

"When a conversion therapy organization produces a video, it can get millions of views," said Shurka. "We've seen conversion therapy on the rise in Egypt, Lebanon, in Africa and throughout Southeast Asia. ... So while Western nations are enacting bans, there's an increase globally."

Shurka was in conversion therapy from age 16 to 21. He said improper prescriptions of anti-depressants and other, stronger drugs are common. In his case, "I was told to take Viagra. Yet I didn't have erectile dysfunction, I was just a gay boy." He was also instructed to stay away from his mother and sisters for three years "based on the false belief that being gay is caused by a man being too close to his mother or other female relatives."

Shurka "went to therapy to overcome conversion therapy," and since co-founding Born Perfect in 2014 said he's "in a great place" now.

Out in the Bay: Why everyone should care about Supreme Court abortion cases
Sign up!