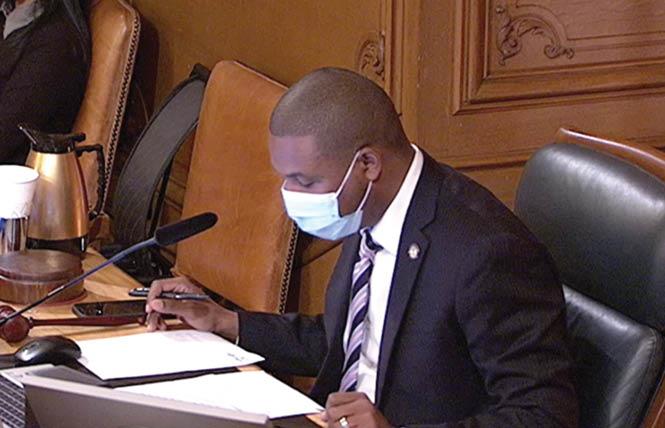 San Francisco Board of Supervisors President Shamann Walton opened the January 4 hearing on the emergency declaration in the Tenderloin. Photo: Screengrab

The city signed a lease for a linkage center at 1170 Market Street near United Nations Plaza January 4 shortly before the San Francisco Board of Supervisors continued until February a vote on whether to again ratify Mayor London Breed's state of emergency declaration in the Tenderloin.

"The purpose of this center is to be a safe, welcoming location for people who suffer from substance use disorder in the Tenderloin where they can access hygiene resources and social space as well as to provide a single location for those who are ready to access city health and human services to link to those programs easily and quickly," a news release states. "Food, water, hygiene supplies, dignity services, and social space will be available at the center."

The center will include referrals to behavioral health care and treatment; substance use treatment; temporary winter shelter; transitional housing; the Homeward Bound program; food coordination; vocational support; therapy and mentoring; and child and family care. It is expected to open in mid-January.

Authorized by Breed's emergency declaration, which the board approved in an 8-2 vote during a dramatic hourslong meeting that ended the morning of Christmas Eve, the linkage center is next to the Orpheum Theatre, less than a block from the Civic Center BART station.

"We are coordinating all our city departments to do everything they can to support everyone living in the Tenderloin," Breed stated. "These initial efforts will continue everyday as we add more resources, like opening up a new linkage center that will allow us to more quickly and directly connect people to services. We've made a commitment to this neighborhood and its residents and businesses, and we will follow through."

The news release touted the accomplishments of the emergency period, stating that 58 people have been placed in shelters, 23 were transported to the hospital or into behavioral health programs; 33 were arrested for dealing drugs (among drugs seized were over 3,164 grams of fentanyl); and Public Works responded to 1,044 requests for service, resulting in 463 tons of waste being removed from the neighborhood.

Mandelman stated to the B.A.R. that it's time the board move forward.

"Today was the second many-hours-long committee of the whole on the emergency declaration in less than two weeks," Mandelman stated. "I think it's time for the board to get out of the way and let the Departments of Emergency Management, Public Health, and SFPD actually try to make some positive change for the Tenderloin."

At the outset of the meeting, Board President Shamann Walton said that the vote was undertaken again so that the supervisors could have more context absent during the first meeting.

"Ultimately, our board voted 8-2 to approve the motion to concur," Walton said, referring to the December 23-24 meeting. "At the time of the meeting we had not received a written plan from the department of emergency management and the mayor's office. ... We will devote this committee of the whole to get answers to unanswered questions about the plan and to get next steps."

District 3 Supervisor Aaron Peskin apologized for missing the earlier vote as he was on vacation.

"Apologies I could not join you on December 23 though my staff watched all 10 1/2 hours of that meeting and briefed me thoroughly," Peskin said. "As I said in the letter I wrote from Mexico, it is obvious to all of us ... that the Tenderloin has been in crisis for quite some time and even more so during the pandemic."

Peskin, who'd urged a yes vote, said he wanted to know if the emergency declaration can speed up the implementation of Mental Health SF, which passed three years ago, exactly what people are being linked to at the linkage site, and what the relationship is between the Tenderloin emergency and "the seemingly endless COVID emergency."

"Whether declarations of local emergency are in order or not, I am pleased the mayor is focusing on this and I'd like to collaborate with the administration cooperatively," Peskin said. "I have fundamental questions — linkage to what? Navigation centers to navigate to where? These are questions we should continue to ask."

Peskin noted that two-thirds of the homeless population is vaccinated for COVID-19.

"We can utilize shelter sites more efficiently if there are shelter sites for folks who are fully vaccinated," Peskin said. "They can be used at higher utilization rates during the health emergency."

Deputy City Attorney Anne Pearson reassured Peskin that the Tenderloin and COVID-19 emergencies can both be addressed, even with the rise in cases due to the higher contagiousness of the Omicron variant.

"It sounds like you're concerned one emergency might take away resources, but I'd hope some effort is taken to address both folks suffering from COVID and folks in the Tenderloin," Pearson said to Peskin.

Pearson said that the emergency can be used to speed up the implementation of Mental Health SF.

"Mental Health SF is a big and complicated piece of leg[islation], including a number of different elements," she said. "If there are elements of that you think are necessary to happen earlier than the date they are scheduled under the legislation itself, we can look to see if emergency powers would be warranted. ... I'm not sure every piece is necessary to address this emergency, but some may be."

Dr. Hillary Kunis, the director of behavioral health for the Department of Public Health, concurred with Pearson.

"Our goal is to reduce overdose deaths, to reduce public drug use, and to provide access to care and treatment for the people of the Tenderloin," Kunis said. "This is something obviously that is extremely important to the city, to the department, and we are aiming to not divert resources and to very much maintain and respond to the current challenges the pandemic is bringing up."

Peskin asked, if this is a public health emergency (a point he agreed with), how come it's being framed differently in the plan submitted to the board.

"The chief health officer has not said this is a public health emergency, and nor has the mayor," Peskin said. "Maybe you can just tell me how you guys are involved? What services is DPH providing?"

Kunis replied that "it takes multiple strategies, multiple kinds of intervention, to solve complex problems, so from the public health point of view we want to use this opportunity to expand, develop, and be creative."

Kunis said that DPH will be providing the program design for the linkage center, as well as shape and coordinate outreach.

"We are still working out the specific details about the staffing: DPH staff who will be on site at the linkage center and who will provide services when appropriate and linkage when appropriate," Kunis said. "We are intending to use, really, our whole system of care, evaluating where space is available on a daily basis. We are working to facilitate where we need creation of space, if we need to. We know we will run into capacity issues and we will actively problem-solve them because we have a team at the ready, ready to coordinate care and move when appropriate.

"I also want to point out for the number of people not ready for formal treatment and formal programs, we are intent on designing programs to encourage people to make positive behavior change," she added. "We see this as also helping motivate people to seek care, and to pull them into care with all of our skills."

"I think that is, as was said by [DPH chief operating officer Greg] Wagner, a much needed and unprecedented rapid hiring and deployment of public health prof to meet this deadly epidemic killing two people a day in our city," Haney said. "I'm very hopeful that by deploying hundreds of people we can save hundreds of lives, but it also leaves me furious and sad we've seen 700 people die each year over the last years and were sitting on positions this board allocated to respond to this epidemic with Mental Health SF."

Wagner said, "I and everyone at DPH share the frustration and sense of urgency," and that the reason for the positions remaining unfilled is because of COVID-related shifts in the medical and local markets.

"We have gotten behind in behavioral health full-person integrated care and elsewhere during the months that pieces of the hiring process were frozen due to the COVID emergency and we haven't been able to dig out of that hole," said Wagner, adding that the Tenderloin state of emergency will speed up the hiring process.

Supervisors such as District 5 Supervisor Dean Preston expressed disappointment at Breed's absence from this meeting (she was also absent last month), as well as the absence of other agencies such as the police (which did have Chief William Scott at the December meeting).

Peskin voted to continue the item, which was agreed to 8-3.

Updated, 1/5/22: This article has been updated for clarification and comments from Supervisor Rafael Mandelman.