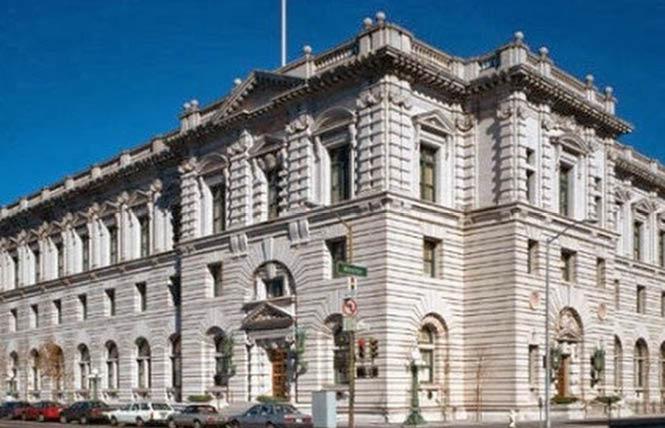 The 9th U.S.Circuit Court of Appeals denied a motion for a rehearing and ordered that the tapes of the Prop 8 trial be released. Photo: Courtesy YouTube

A federal appellate court is standing by its earlier decision to allow for the release of tapes of the 2010 San Francisco federal trial that first struck down California's same-sex marriage ban as unconstitutional — setting the stage for a potential showdown at the U.S. Supreme Court.

As the Bay Area Reporter previously reported, the 9th U.S. Circuit Court of Appeals ruled in a 2-1 decision November 18 that the tapes can be released, following a lengthy legal battle.

The law firm Cooper & Kirk, which represents those seeking to keep the tapes under seal, asked the court to convene "en banc" (involving all the appellate judges and not just the three on the panel, though for the 9th Circuit, which has 29 judges, en banc consists of 11 jurists) to reconsider. In a December 28 ruling, the court denied this request.

Thomas Burke, an attorney for KQED-TV, which sought the tapes' release, told the B.A.R. that the ruling was expected, and that the tapes cannot be released until the appeals are exhausted at the Supreme Court.

"It comes as no surprise that the 9th Circuit was not interested in rehearing the earlier opinion to make the recordings of the Prop 8 trial public," Burke stated. "After all, the proponents provided no evidence that anyone would be harmed by the release of the recordings of this historic trial. But off to the U.S. Supreme Court they now go, further perpetuating this continued sealing."

Andrew Pugno and Charles J. Cooper, who represent those seeking to keep the tapes under seal, did not respond to requests for comment for this report.

The saga over the tapes has lasted longer than the saga over Proposition 8 — the same-sex marriage ban approved by Golden State voters in 2008 — itself.

The root of the case over the tapes began in 2010. The constitutionality of Prop 8 was challenged in Hollingsworth v. Perry, a federal lawsuit that appeared in the court of Judge Vaughn Walker.

The idea was floated about broadcasting the trial in other courthouses because of the public interest. The California Supreme Court issued a stay of the proposed broadcast, but Walker continued to tape the proceedings in case the stay was lifted. Subsequently, Walker stated that the tapes were being made in order to aid in his consideration of the testimony and evidence during the trial, saying at the time "it's not going to be for purposes of public broadcasting or televising."

Walker, a federal judge appointed by former President George H.W. Bush, ruled that Prop 8 was unconstitutional. The U.S. Supreme Court ruled in 2013 that Walker's decision could go into effect, resuming same-sex marriage in California two years before the nation's highest court legalized same-sex marriage in all 50 states in the case of Obergefell v. Hodges. Walker came out as gay after the trial and retired from the bench in 2012.

The Northern District of California placed the tapes under a 10-year seal in accordance with its rules. Trial transcripts, however, formed the basis of both a stage production and a network television docuseries. KQED-TV wants the tapes for its own documentary purposes.

The seal expired in 2020. Prop 8 proponents sued to stop the release of the tapes, alleging that they may be subject to harassment or intimidation as a result, and that releasing the tapes ever would be a violation of Walker's statement they'd not be used for broadcast. Last summer, a district court judge ruled that the tapes should be released, but the proponents appealed to the 9th Circuit, which as the B.A.R. reported last August kept the tapes sealed while it could consider the case.

The 9th Circuit found last month that the Prop 8 proponents hadn't proved they'd be victims of harassment or intimidation, and that Walker's statements shouldn't be read as a perpetual promise.