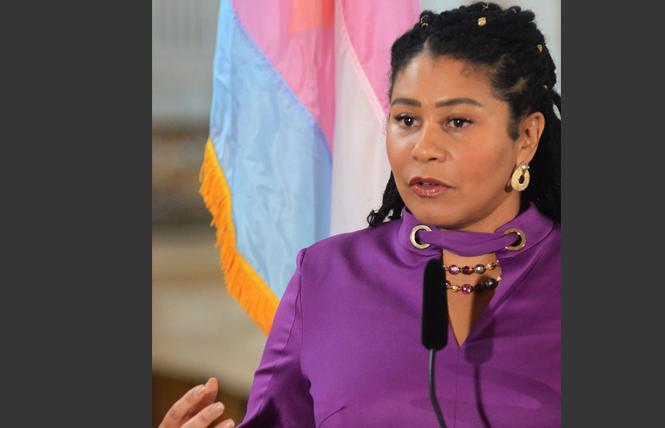 San Francisco Mayor London Breed's emergency declaration for the Tenderloin was approved by the Board of Supervisors early Thursday. Photo: Rick Gerharter

The San Francisco Board of Supervisors voted early Thursday 8-2 to allow Mayor London Breed's state of emergency in the Tenderloin to continue.

By law, the board had to convene a special meeting to continue the mayor's emergency declaration within seven days of December 18, when it was announced. The meeting started at 2 p.m. December 23 and went past midnight as more than 100 people provided their one-minute each of public comment. The supervisors also debated the issue for several hours.

The emergency declaration allows the Breed administration to waive rules around contract procurement, as well as zoning and planning codes, to open a site where people with substance abuse issues can be linked to behavioral health services.

"The Tenderloin needs change, and that requires us to do things different," Breed said in a statement shortly after the vote. Supervisor Aaron Peskin was absent, but sent a letter stating he would support the declaration. The supervisors are expected to discuss the matter again January 4.

Board President Shamann Walton and Supervisor Dean Preston voted against the measure.

"The situation in the Tenderloin is an emergency and it calls for an emergency response," Breed stated at the time. "We showed during COVID that when we're able to use an emergency declaration to cut through the bureaucracy and barriers that get in the way of decisive action, we can get things done and make real, tangible progress."

The emergency declaration came in the days after Breed pledged to crack down on the "bullshit that has destroyed our city" by flooding the downtown neighborhood with police officers, which itself came on the heels of high-profile robberies of Union Square boutiques, heightened anxiety about public safety, and an ongoing overdose crisis that last year killed twice as many San Franciscans as died of COVID-19. Many of these overdose deaths are concentrated in the Tenderloin.

"If arrests and prosecutions alone could solve the drug crisis in this country or in this city, it would have been solved long ago," Boudin said December 20. "We've invested over a trillion dollars in fighting the so-called war on drugs, and where has it gotten us?"

Also opposed are the Harvey Milk and Alice B. Toklas LGBTQ Democratic clubs, which in a joint statement with the San Francisco Latinx Democratic Club December 20 urged the mayor to "withdraw this emergency intervention plan and to focus the city's energy on comprehensive solutions that address the root causes of San Francisco's issues, rather than slapping a Band-Aid on the most visible face of a problem."

The clubs stated that "more police will create more barriers to housing, stop more community members from accessing vital resources and benefits, and put community members' lives at risk of violence from the SFPD."

Though gay Alice club co-chair Gary McCoy had urged Breed to declare a state of emergency around the drug overdose crisis earlier this year, this was to expedite the creation of a supervised consumption site, which Breed announced last month that the city is looking into, as the B.A.R. reported.

McCoy did not respond to a request for comment.

McCoy works for HealthRIGHT 360, which issued its own statement ahead of the supervisors' vote.

"We know the Tenderloin needs an intervention, and it has for decades," CEO Vitka Eisen stated. "The War on Drugs has produced exactly the conditions you see in the Tenderloin today, having contributed to mass incarceration and generational carceral trauma, and the dehumanizing conditions for so many people in the Tenderloin and in other notably Black and Brown communities in San Francisco."

The San Francisco Republican Party urged supporters to phone in the meeting and express their support.

"While Breed's plan is imperfect, and we may question her capacity to implement it effectively, it is a big step in the right direction and a sign that the political winds have shifted decidedly against last year's anti-policing nonsense," a December 22 GOP statement reads. "The plan incorporates a number of evidence-based strategies for combating crime, including an increase in the number of visible patrol officers on the street, focused deterrence teams, and broken windows policing."

'Clearly this is an emergency'
During the meeting Mary Ellen Carroll, the head of the Department of Emergency Management, said that the city is failing to keep residents and visitors safe.

Specifically, Carroll said, the declaration will allow the DEM to lead the response, the opening of a linkage center will be expedited from nine months to three weeks, and the city will be able to be reimbursed by the state or federal governments should the latter two declare their own drug emergencies.

Carroll said fentanyl was a major factor in 70% of the overdose deaths from January to October 2021.

"Clearly this is an emergency and we have to address it now," Carroll said. "The Tenderloin community has suffered long enough. They have waited too long for us to act, and now we have the opportunity safely and humanely to help them."

Haney said that "anyone who lives in the Tenderloin, who visits the Tenderloin, knows we've been experiencing a public health emergency for some time," adding that there's been a three-year increase of 350% in drug overdose deaths.

"If this is not a public health emergency then that term has no meaning at all," Haney said. "We all know that bureaucracy and lack of coordination across departments has gotten in the way of results."

Haney concurred that "people should not be locked up for addiction," saying that the emergency declaration doesn't give police any new powers.

Brian Basinger, a gay Tenderloin resident who is the executive director of the Q Foundation, wrote during this part of the meeting on Facebook that "this is all the evidence we need that the current approach isn't working."

"If you don't have the balls to raise your children in the TL, then you don't have the right to condemn us to a life that you wouldn't accept for yourself," Basinger stated. "Shooting under my window last week. Dead body coming up the street earlier this week, and then another dead body in our doorway the other day."

Ronen: 'I wish the mayor herself was here'
District 9 Supervisor Hillary Ronen followed Haney. She agreed with him that there is a public health emergency in the Tenderloin but criticized how the emergency declaration was rolled out in the media by Breed.

"What [Breed] has expressed to the public is a doubling-down on a century-old failed drug war," Ronen said. "Truth be told, I want to vote in favor of this health emergency ... but because of the way that this has been described in the media, I don't have faith that we're talking about the same thing. ... I wish the mayor herself was here and interrupted her time off with her family."

Ronen said that while the declaration would give the mayor the authority to unilaterally increase the police budget, she'd be satisfied with a public commitment from Breed's office that wouldn't happen.

"I just want to get that all on the record," Ronen said.

Ronen also said she wanted to ensure people wouldn't be arrested for declining drug treatment. The mayor's office stated that "that's not how the plan is being constructed."

Police Chief William Scott addressed the board to try to assure Ronen that people wouldn't necessarily be arrested for declining drug treatment, saying "our objective is not to use arrest as a solution.

"The bottom line is just in the Tenderloin in the past three years our officers have saved 290 people using Narcan," Scott added.

Narcan, or Naloxone, is a pharmaceutical drug used to counter opioid overdoses. It can be administered intravenously or by nasal insufflation. Since 2017, all SFPD patrol cars carry Narcan kits.

Ronen interrupted Scott, saying, "I'm not trying to demonize the police here. What I disagree with vehemently is that criminalizing addicts is the way to solve the drug crisis," adding that "what you're describing to me is completely different" from what Breed said when she announced the emergency declaration.

"I want to vote yes on this today, but if you're going to arrest people it doesn't make sense," Ronen said. "I want you to tell me today this is all about marshaling resources. ... I need you guys to tell us that what the mayor said was not true. Can you tell me that?"

Scott answered, "What I can tell you is this: Yes, we will engage with people and our objective is to get them to a better place. It's as simple as that. ... We're not planning on using an arrest tactic to clear the streets. That's not what this emergency declaration is at all — at all."

Gay District 8 Supervisor Rafael Mandelman made the point that public drug use by "10 to 15 people on the sidewalk" is a "public safety" concern in addition to a public health concern. He also pointed out that Breed will pursue police initiatives regardless of what the supervisors decide.

"The hope is this won't fully deflect problematic behaviors to other neighborhoods," Mandelman said, prefacing a question about how the city will respond if that happens.

Carroll said, hopefully, the city can replicate the emergency response as needed.

"This is a risk, but we are thinking about it and we'll be coordinating on a daily basis to address that," Carroll said.

Preston said "nothing that's been said so far gives me confidence" that there's any plan other than a police response.

"I think it's really sad, honestly, that the roll-out has, in my view, really been a publicity stunt," Preston said, echoing Ronen's comments. "The mayor did not engage stakeholders or this body about a state of emergency."

"It's not just the media coverage," Preston said. "It's the repeated statements by the mayor."

Preston said "the administration and the mayor have stood by while conditions in the Tenderloin have deteriorated," and characterized the emergency declaration as an about-face, using drug war rhetoric for public relations purposes, "which makes it really impossible for me to believe the assurances of administration officials."

Selby stated she is in favor of the declaration.

"Everyone should feel safe in the Tenderloin — the area with the most immigrants and families in all of San Francisco," Selby stated. "What has been done so far is not working. And you know the definition of insanity. Compassion + consequences — we need both."

Mahmood also stated he is in favor of the declaration, writing on Twitter that it is "a step in the right direction."

"I walk through the Tenderloin every day. It's suffering," he stated. "We need to take action, because inaction is literally killing us."

Update: Dec. 24 — This story has been updated to reflect that David Campos issued a statement December 23.