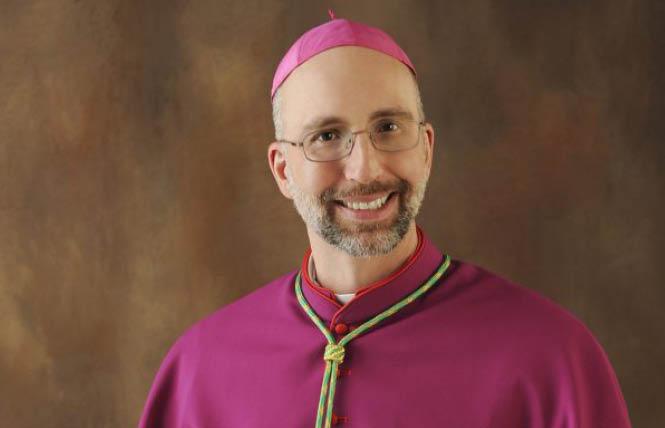 The Roman Catholic Diocese of Marquette, in Michigan, is receiving criticism from LGBTQ Catholics and their allies for seeking to bar them from the sacraments and church leadership positions.

A document, "Created in the Image and Likeness of God: An Instruction on Some Aspects of the Pastoral Care of Persons with Same-Sex Attraction and Gender Dysphoria," signed by Bishop John Francis Doerfler, states that "persons who are living in a same-sex sexual relationship (or in any sexual relationship outside of an ecclesiastically recognized marriage between one man and one woman) should not present themselves for Holy Communion," though "such persons may be given Holy Communion in danger of death if they express repentance."

The document was reportedly signed in July but recently garnered broader attention.

Doerfler's instructions also state that "similarly, persons who identify as a different gender than their biological sex or have attempted 'gender transitioning' should not present themselves for Holy Communion" and that "a person who is publicly living in a same-sex sexual relationship (or in any sexual relationship outside of an ecclesiastically recognized marriage between one man and one woman) may not exercise a liturgical ministry or position of leadership including but not limited to reader, extraordinary minister of Holy Communion, catechist, member of the parish finance or pastoral council, etc., unless the person has repented and withdrawn from the relationship."

The document comes at a time that the world's largest Christian denomination is deeply divided on both the issues of LGBTQ rights and who should be receiving Holy Communion (the central ritual of Catholicism, participants consume bread and wine believed to be the body and blood of Jesus Christ).

As the Bay Area Reporter previously reported, Pope Francis has gone further than any pontiff to consistently recognize the presence and worth of LGBTQ people, though he does not support same-sex marriage.

Also, earlier this year, some bishops in the United States — such as San Francisco Archbishop Salvatore Cordileone — discussed the worthiness of President Joe Biden, a Catholic, to receive Holy Communion due to his support for abortion rights, before taking no action. When he visited the Vatican in November, Biden said Francis personally told him to continue receiving the sacrament, according to the National Catholic Reporter.

But it is unlikely such an intervention would come in this case, though the Reverend James Martin, an American priest who is a consultant on the Roman Dicastery for Communication (which advises the pope), criticized it in a statement to the B.A.R.

When asked how this comports with the church's traditional disapproval of same-sex relationships and gender identity, Martin stated that LGBTQ people are too often singled out for criticism.

"The argument is also made that LGBTQ peoples' lives are often not in full conformity with church teaching," Martin continued. "But that is true for many groups of people: straight couples using birth control, college students who are sexually active, as well as business leaders who pollute the environment, and, more broadly, people who don't love, forgive, or care for the poor. Focusing on LGBTQ people is a form of discrimination and, worse, a kind of targeting. Besides, the sacraments are not just for straight people."

Francis DeBernardo, the executive director of New Ways Ministry, a pro-LGBTQ Catholic group, stated that he predicts the document is "destined to backfire explosively in the face of the leaders who wrote these restrictive and harmful rules."

As an example, DeBernardo brought up an effort earlier this year to allow Catholic clergy to bless same-sex couples' relationships. Some clergy defied a Vatican directive that stated such a blessing would not be allowed, which only brought attention to the idea.

"The same reaction will happen in the case of these guidelines," DeBernardo stated. "Catholics in the pews, who polls consistently show overwhelmingly support LGBTQ people, will balk at these penalties. Theologians who are opening up new ways of thought to further affirm LGBTQ people will refute the faulty reasoning the diocese uses. And bishops in other dioceses will certainly speak out to let Catholics in their areas know that LGBTQ people are welcome as full members of the church."

Nonetheless, DeBernardo acknowledged "the downside of such a statement is the grave and lasting pastoral and psychological harm that it will cause."

"Not only will LGBTQ people feel further alienated from the church, but their family members, friends, and supporters will also end up leaving for more welcoming communities," he stated. "Worse yet, such harsh messaging will certainly cause some LGBTQ people, particularly youth, to develop negative self-images and potentially practice self-harm."

DignityUSA, another group for LGBTQ Catholics, criticized the document in a statement.

"The Marquette diocese's instructions are the most egregious and exclusionary I have ever seen," said Marianne Duddy-Burke, DignityUSA executive director. "It is appalling that, under the guise of 'pastoral care,' this document essentially strips LGBTQ+ people from any role in the church other than sinner."

DignityUSA is calling on all Catholics and people of faith to make their objections to the document known and is demanding that Doerfler rescind it.

The Diocese of Marquette and Doerfler did not respond to requests for comment for this report.

Update: Dec. 21 at 12:25 p.m. — This story has been updated to reflect that the Diocese of Marquette and Doerfler did not respond to requests for comment.

The LGBTQ Agenda column will be on holiday hiatus and will return Tuesday, January 11. Got a tip on queer news? Contact John Ferrannini at j.ferrannini@ebar.com