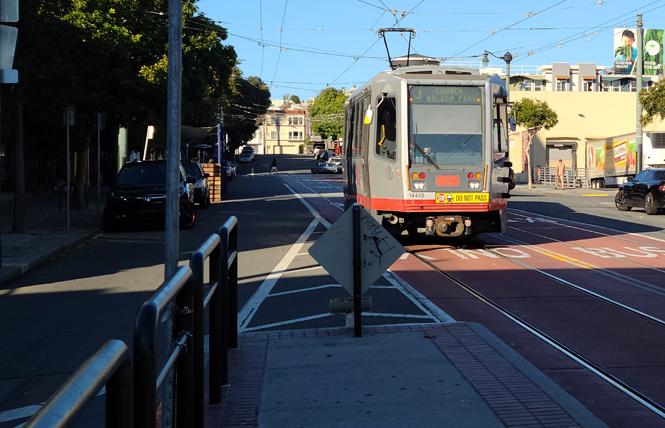 J-Church trains will return to downtown subway service next winter after the San Francisco Municipal Transportation Agency board rejected the staff's preferred recommendation that the line continue to end at the Church Street and Duboce Avenue intersection.

Last December, SFMTA altered the route when it revived train car service along the J-Church through Noe Valley and the Castro neighborhoods. The transit agency had mothballed the subway line for much of 2020 due to the COVID pandemic.

Rather than heading underground via the tunnel at Church and Duboce to service the downtown subway stations, the J-Church trains now make their last inbound stop at that intersection. The trains then turn around to head back outbound to the terminus at the Balboa Park Station near City College of San Francisco.

SFMTA officials have emphasized that keeping the J-Church trains out of the downtown tunnel has resulted in a 75% reduction in delays for the other subway lines that continue to use it.

Although done to speed up service on Muni's other lines that continue to service downtown, it has inconvenienced J-Church passengers who now have to disembark their trains and catch Muni's other lines via the underground Church Station or the aboveground N-Judah stop on Duboce at Church. Disabled Muni riders and those with mobility issues have been particularly vocal in objecting to the reduced J-Church route.

They have pointed out that the only elevator into Church Station is across Market Street, requiring them to navigate four lanes of traffic to reach it. And often the only escalator running down into the station is also on that side of the street.

Due to their objections, in particular from members of the Restore The J Workgroup that formed in the summer, the SFMTA board voted 6-0 to return downtown subway service to the J-Church at its December 7 meeting after a lengthy discussion about the plans. The route should return to its full service as soon as February but will be reduced in frequency to every 15 minutes in order to accommodate the line extension.

SFMTA board director Steve Heminger put forward the motion for doing so since he noted Muni service is still below its pre-pandemic levels and there are not as many subway trains in the tunnels per hour as there once was. There are now fewer than 25 trains per hour, meaning Muni has yet to hit its self-imposed limit of having 30 trains per hour in the downtown tunnel. At that threshold, the transit agency predicts there will be systemwide congestion and delays in service.

"We are fixing a problem we don't have currently," said Heminger.

Gay Mission cafe owner Manny Yekutiel, the lone LGBTQ member of the SFMTA board, agreed. He argued the transit agency should revert back to the J-Church downtown route and work in the meantime on fixing the platforms at the stops for the subway line at the Church and Market street area to provide better shelter and wayfinding signs for passengers. That way, he argued, the concerns of riders would be addressed if the J-Church needs to be taken out of the tunnel in the future.

The board not only rejected the SFMTA staff's preferred option to maintain the status quo but also another option to only restore subway service during the evening, when there is less congestion in the tunnel that runs under Market Street to the Embarcadero. It also rejected adding bus service every 30 minutes to provide a single-seat ride from Noe Valley to the Embarcadero during the day.

Another option for the SFMTA board would be to keep the shortened J-Church route in place, which appears to be the preference of the transit agency.

Jeffrey Tumlin, a gay man who oversees the SFMTA as the city's director of transportation, had suggested the board delay a decision on the J-Church rather than vote on it Tuesday if it was going to call for the trains to be returned into the subway tunnel. But there was little support for doing so among the board members.

SFMTA board chair Gwyneth Borden agreed with her colleagues who had argued there was no reason to further inconvenience J-Church riders at this time. She noted the line has seen the slowest return to its pre-pandemic ridership compared to the other subway lines.

"Let's see if ridership increases as a consequence of it going back into the tunnel. That will show us that really does matter," said Borden.