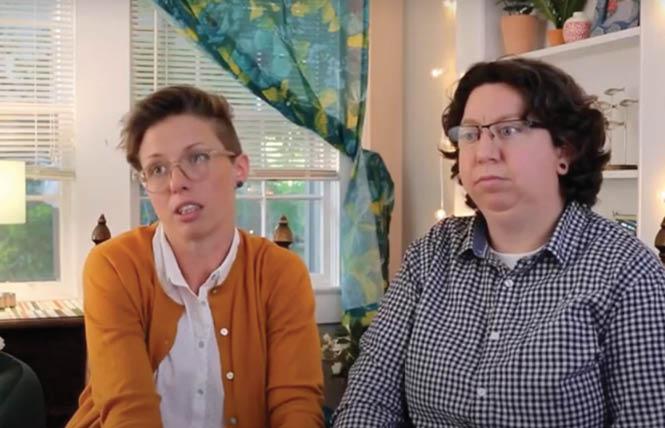 A federal court ruled last week that Eden Rogers, left, and Brandy Welch can continue their suit against the state of South Carolina for contracting with an adoption agency that discriminates against people who are not evangelical Protestants. Screengrab: Courtesy Lambda Legal Defense and Education Fund

A federal district court in South Carolina affirmed that the United States Supreme Court's ruling in Fulton v. Philadelphia earlier this year did not grant a blanket license to discriminate against LGBTQs who want to be foster parents.

As the Bay Area Reporter reported in June, the high court unanimously decided that the city of Philadelphia violated the free exercise clause of the First Amendment to the U.S. Constitution when it refused to contract with the Roman Catholic Archdiocese of Philadelphia's foster care agency due to an ordinance prohibiting foster care agencies from discriminating based on sexual orientation.

However, the court's holding in the case was narrow. In his majority opinion, Chief Justice John Roberts wrote that the state has a compelling interest in preventing LGBTQ discrimination. However, because the statute included the ability to make an exception — and none was made for the religious agency — Roberts found that the free-exercise clause had been violated.

On December 2, the United States District Court for the District of South Carolina turned down a motion to dismiss a lawsuit against the state of South Carolina by a lesbian couple. The state had argued that it was OK in supporting a foster care agency that discriminated against LGBTQ couples, based on the Supreme Court's decision in Fulton.

Eden Rogers and Brandy Welch sued in May 2019 after they were turned away by Miracle Hill Ministries, the largest state-contracted and government-funded foster care agency in the Palmetto State, because Miracle Hill restricts "eligibility to prospective foster parents who are evangelical Protestant Christians," and disqualified families led by same-sex couples regardless of their faith.

"For prospective foster parents who live in South Carolina's upstate region and do not meet Miracle Hill's religious requirements, the primary foster care agency serving the region is not available to them," the civil complaint states. "Such denial creates a practical barrier to fostering, as not all foster care agencies are equivalent or offer the same services, and also stigmatizes these families, branding them as inferior and less worthy of serving as foster parents. Moreover, this discriminatory treatment of prospective foster parents denies children access to families they need."

The suit alleges that the state violated the establishment and free exercise clauses of the First Amendment to the Constitution by essentially establishing a religious test for foster parents in northern South Carolina.

Under the Trump administration, the U.S. Department of Health and Human Services had granted a waiver to Miracle Hill Ministries from federal non-discrimination rules. The Biden administration stopped this practice.

"Eden and Brandy were harmed by government-sanctioned discrimination and have the right to be treated equally," stated Karen Loewy, Lambda Legal's senior counsel who is also working on this particular case. "No matter how creative the state of South Carolina gets with its misinterpretation of the Supreme Court's decision in Fulton, that fact isn't going away. The Fulton decision addressed a very narrow set of claims and circumstances, none of which are present in this case.

"We are eager to move forward; for Eden and Brandy, but also for all of the children and young people in the child welfare system in need of stable and loving homes," Loewy continued.

This isn't the first time Miracle Hill Ministries has been the subject of a lawsuit. Aimee Maddonna, a Catholic mother of three in South Carolina, sued the state and the Trump administration in 2019 after she was turned away by the agency for her religious beliefs. She also alleged establishment and free exercise clause violations.

Last year, the U.S. District Court for the District of South Carolina denied a motion to dismiss that suit too, ruling that "to the extent defendants' assert that their actions are immune from challenge under the Establishment Clause as 'religious accommodation,' such argument is directly contrary to the well-pled allegations in the complaint and long-established federal jurisprudence and must be rejected at this stage of the proceedings."