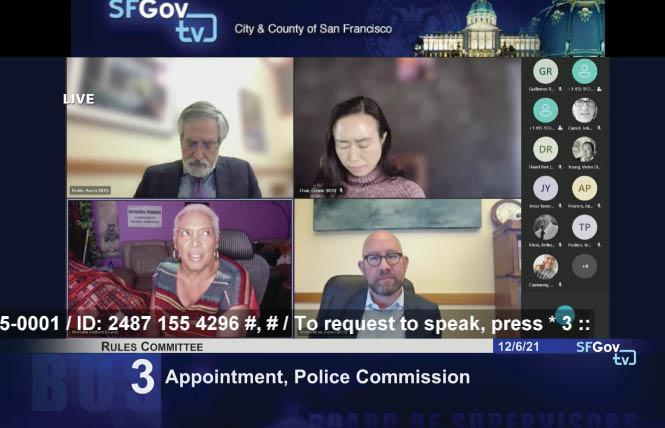 Two transgender women who applied to be appointed to the powerful San Francisco Police Commission spoke at a Board of Supervisors Rules Committee meeting December 6, but a final vote won't be taken until next week. The seat was vacated earlier this year by longtime lesbian commissioner Petra DeJesus

As the Bay Area Reporter previously reported, DeJesus was the only openly LGBTQ member of the commission at the time of her retirement April 30. An associate at the law firm Kazan, McClain, Satterley and Greenwood, she'd served on the commission for 15 years.

Nevertheless, it looks like the three San Francisco supervisors on the committee that forwards nominations to the entire board won't be going with Veronika Fimbres or Stephen Schwartz (also known as Lulu) with all three indicating support for the other two candidates — Jesus Gabriel Yanez and David Rizk — during the meeting.

"I'd like to think both of them could and should be accommodated on this body," stated Aaron Peskin, the chair of the rules committee, referring to Yanez and Rizk. "For a while we didn't have the embarrassment of riches we now do."

Peskin said Mayor London Breed also has appointment power to the commission and so the supervisors should reach out to her to ask that Yanez or Rizk (whomever the supervisors decide not to appoint this month) be appointed when a seat opens up in April.

Three of the seven commissioners are appointed by the supervisors, and four by the mayor.

Yanez, a program director with Instituto Familiar de la Raza, had seven people call in to support his application. Rizk, an assistant federal public defender, had a few. Fimbres and Schwartz had none.

B.A.R. readers may remember Fimbres as a former San Francisco veterans affairs commissioner who was a 2018 Green Party gubernatorial candidate. Fimbres is also the founder and CEO of Black Trans Life Matters.

Fimbres was the first trans person to be appointed in San Francisco, she said, when she served as a veterans affairs commissioner for 14 years under former mayors Willie Brown, Gavin Newsom, and the late Ed Lee.

"As a Black trans woman, I'm concerned about the things that other communities are concerned about," Fimbres said. Nonetheless, she said "I'd like to see some of the murders of trans people of color solved."

"More than anything, we have to show transgender people can do more than walk and work the streets," Fimbres said. "We have a viable role in society to play."

Schwartz also made her case to be selected. Schwartz is a former San Francisco Chronicle reporter and candidate for supervisor against Peskin last year.

"I am a transgender female, but I don't approach the supervisors as a token of the trans community," Schwartz said.

Schwartz claimed, "I believe policing in America is obsolete. It's essentially a 19th century institution and needs to be modernized."

Schwartz said her time living in Barcelona, Spain showed her how a police department can be reformed. "There was a time the police were hated — loathed — in that part of Spain, but now they are trusted," Schwartz said. "It's incredible to see."

Schwartz said that policing is still essential to public safety, citing the insurrection at the United States Capitol on January 6 as an example.

"The police department — for all the problems we have in this country — they protect me, they protect us, and on January 6, they protected our democracy," Schwartz said.

On a similar note, Rizk said that policies need to be modernized to maintain public trust in the police department, and thus protect public safety.

"It needs to be a profession people continue to look up to and aspire to," Rizk said. "That involves training."

Yanez also touched on the importance of training, saying that it's important "when incidents are escalating, that we have a police force trained in containment and de-escalation and connected to the communities they serve."

Supes, callers throw weight behind Yanez
Kevin Ortiz, the vice president of political affairs with the San Francisco Latinx Democratic Club, called in to voice his support for Yanez to be chosen.

"It's important our community continue to be heard and represented in these spaces since over policing tends to happen with communities of color — especially the Latino community and especially the Black community."

After Peskin said "I think two of them rise to the top," referring to Yanez and Rizk, committee member District 1 Supervisor Connie Chan chimed in to express a preference for Yanez. District 9 Supervisor Hillary Ronen sent in a letter of support for Yanez.

District 8 Supervisor Rafael Mandelman, who represents the Castro neighborhood and is the only LGBTQ person on the board, rounded out the committee. He expressed his gratitude for DeJesus' service and said that while "we have a number of exceptional candidates in front of us, both are going to cost us in terms of gender representation and sexual orientation representation."

"It's not going to be great for the community to not have any queer people" on the commission, Mandelman said, referring to Yanez and Rizk, "but that said, both folks would be valuable additions."

Mandelman liked that Rizk expressed that it is "not necessarily a tension, but a challenge, for the commission to address reform and protect public safety."

With that, the supervisors decided in a unanimous 3-0 vote to take a continuance.

"I'm always down with a continuance," Chan said. "Frankly, this is the first time all three of us in the committee can have this conversation."

The committee plans to forward an application to the full board on December 13 so that the supervisors can vote on it the following day, their last meeting of the year.

Amitabho Chattopadhyay, a nonbinary lesbian transgender woman, had also applied for the vacancy but Peskin said at the outset of the meeting that she had withdrawn from consideration. Chattopadhyay lives in the East Bay, according to her application, and would have required a residency waiver to serve on the police commission. 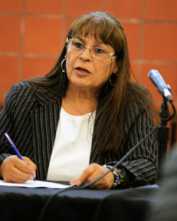