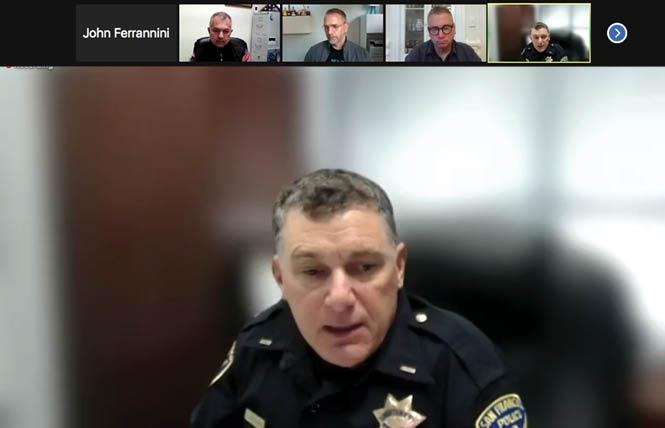 As fear about property and other crimes has many residents and merchants on edge, the San Francisco Police Department's acting captain of Mission Station spoke at the Castro Merchants Association's final meeting of the year December 2.

Gavin McEachern became the acting leader of Mission Station — which is responsible for much of the Castro neighborhood — following the departure of Commander Rachel Moran last month, as the Bay Area Reporter previously reported. McEachern served as head of the Honda motorcycle unit, the two squads of which patrol the city, Moran said, and he was her handpicked successor in the role. The SFPD has not responded to a B.A.R. request to interview McEachern.

McEachern's virtual appearance before the merchants comes as fear of crime has become evermore palpable in the city. Just as the Christmas shopping season got underway prior to Thanksgiving, Union Square faced brazen burglaries from individuals whom prosecutors allege were organized thieves. Nine people were charged by District Attorney Chesa Boudin — whose own job is on the line in June as he faces a recall effort fueled by fears over public safety, as the B.A.R. previously reported.

McEachern said he is "relatively certain" he'll be at Mission Station for the long haul.

"I'm so happy to build these relationships," he said, noting that as a 32-year veteran of the force he has been assigned to Mission Station three times in the past: twice as a patrol officer and once as a sergeant.

"Mission Station was my first permanent station," said McEachern, a native San Franciscan, having grown up in the Richmond, North Beach, and Potrero Hill neighborhoods.

Merchants wanted to know how to protect themselves, their staff, and their property.

McEachern said each station is working to fill gaps; for Mission Station, "our priority will be to fill our foot beats, especially in the shopping corridors." He also noted that burglaries are common at stores that sell sunglasses, sneakers, and cannabis.

He told the business owners one thing they can do is "reach out to your core customer group and set up appointments" so that staff can "screen people" coming in. He added that "if you've got a lot of items by the front door, perhaps moving them to provide geographic safety" elsewhere in the business would be a good idea.

McEachern told the merchants that in the burglaries on retail businesses, one sees "typically three to four individuals" coming out of cars that are often double-parked.

Prospective Castro business owner Suzie Jennings asked what the rules are about having a gun in one's place of business.

McEachern said that is a personal choice but gave words of caution.

"Carrying a firearm in your business or in your home is nobody's business but your own," McEachern said. "If you choose to keep a firearm on premises, I'd keep that information very limited. I'd also have basic training on firearm usage."

McEachern said he's seen the use of firearms "trending for six to eight months."

"It's definitely taken a turn in the wrong direction, and I'll leave it at that," McEachern said.

Castro Patrol Special ending Dec. 31
In another police-related item, Cody Clements, who succeeded John Fitzinger and the late Jane Warner as the San Francisco Patrol Special Police's Castro officer, will be leaving his position December 31, meaning the neighborhood will be without a patrol special.

Andrea Aiello, a lesbian who is the executive director of the Castro/Upper Market Community Benefit District, explained what the patrol special is to merchants and other attendees who were either unsure or befuddled.

"They were the first police force in San Francisco, during the Gold Rush days, before the police department," Aiello said. "They are actually in the city charter. They are privately owned and funded, so it's a business."

Yet the San Francisco Patrol Special Police has fallen on hard times in recent years, maintaining beats only in the Castro-Mission neighborhood area, and at Fisherman's Wharf.

"It's been incredibly difficult to hire new patrol specials, and the CBD and the merchants have been working with our supervisors on this going back to Bevan Dufty [who served 2002-2011] and have gotten nowhere," Aiello said. "There's been a historical reluctance to allow the patrol specials to grow."

Clements is the patrol special police's only hire in the last decade, Aiello said.

"Cody decided he wanted a job with benefits and a retirement plan," Aiello explained. "So he offered to give the beat to patrol special assistants, but none of them were interested."

Though it's a private business, Aiello said that patrol special officer hirings and firings are overseen by the city.

"San Francisco is unique, at least in the Bay Area, in having had private police and it's probably the end of an era," Aiello said.

The B.A.R. asked Aiello for Clements' contact information but has not heard back.

A goodbye celebration for Clements will be held in Jane Warner Plaza Sunday, December 12, at 2 p.m.

Cultural district's vaccination hub continues
In issues relating to the COVID-19 pandemic, Tina Valentin Aguirre, a genderqueer person who is the manager for the Castro LGBTQ Cultural District, told the merchants that the testing and vaccination hub in the parking lot on 18th Street nestled by Walgreens and Toad Hall on Saturday afternoons will continue through December 18, then start up again next year after a brief hiatus for the holidays.

Aguirre said that the need for the clinic will be reassessed "in early spring." Patrick Batt, a gay man who is the owner of AutoErotica, expressed in the Zoom meeting's comment section that he is concerned with the testing and vaccination hub's elimination of parking spaces.

"Have you explored the use of the MANY empty storefronts," Batt asked.

Aguirre responded that "it's safer for us to do this outside. There are long lines."

Aguirre also invited merchants to a virtual workforce development focus group session on December 15 at 10:30 a.m. The information gathered at the session will be included in the district's Cultural History, Housing and Economic Sustainability Strategies, or CHESS, report, which the B.A.R. previously reported that the district is working on. People interested in participating should contact the district to receive a link.

Man shot in the leg by Dolores Park, supervisor says
Sign up!