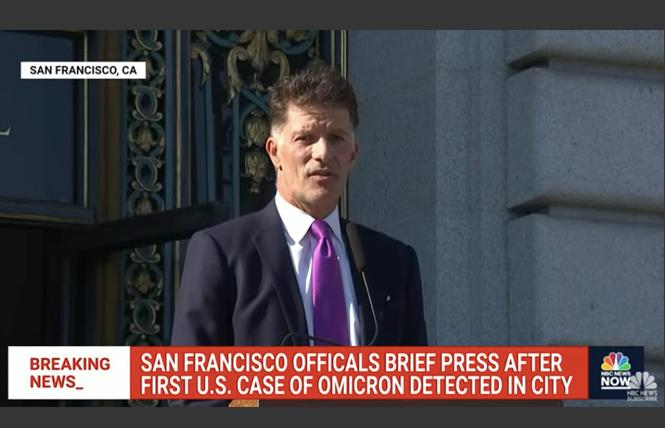 The first case in the United States of the new Omicron variant of SARS-CoV-2, the coronavirus that causes COVID-19, has been detected in San Francisco, local and national health officials announced December 1. The individual, who recently arrived from South Africa, has mild symptoms and is recovering.

Speaking at a Wednesday press briefing with Mayor London Breed on the steps of City Hall, San Francisco Health Director Dr. Grant Colfax and Health Officer Dr. Susan Philip stressed there is much that is not known about the new variant, including whether it is more easily transmitted, whether it causes more severe or milder disease, and whether it can evade immunity from vaccination or prior infection.

According to Philip, the individual, who arrived at San Francisco International Airport on November 22, had heard the news about Omicron and reached out to the health department when they developed symptoms. The person's gender is not being revealed, but they are reported to be between the ages of 18 and 49 and previously healthy. Colfax added that the person is fully vaccinated with the Moderna vaccine but had not received a booster.

After a suspicious PCR test, Dr. Charles Chiu of UCSF sequenced the individual's virus Tuesday night and confirmed that it was the Omicron variant. The person is now in self-quarantine, their close contacts have been notified, and none have tested positive.

"California's large-scale testing and early detection systems have found the omicron COVID-19 variant in California," Governor Gavin Newsom wrote on Twitter. "We should assume that it's in other states as well."

San Francisco health officials said they do not plan to change the city's COVID procedures or mandates, but they urged people to get vaccinated as soon as possible.

"This is a cause for concern but certainly not a cause for us to panic," Colfax, a gay man, said, echoing words President Joe Biden used at a White House briefing on Monday.

"San Francisco is well positioned to respond to variants, our vaccination rate is high, children 5 to 11 are being vaccinated at a rapid pace, and our mask and vaccine requirements are among the most stringent in the country," Colfax continued. "Our message is the same as yesterday: Get vaccinated, get a booster if you're eligible, and continue to wear a mask indoors where required. At this time, we do not anticipate changing any of our health orders, changing current restrictions or imposing new restrictions on activities in San Francisco."

Biden conveyed a similar message: "If people are vaccinated and wear their mask, there's no need for a lockdown," he told reporters.

Variant is widespread
Health officials in South Africa — which, like San Francisco, is diligent about viral sequencing and surveillance — raised the alarm about the variant November 24, but it was first detected in Botswana. The earliest confirmed infection was from a specimen collected on November 9. The World Health Organization designated Omicron (also known as B.1.1.529 variant and briefly misnamed Nu) a variant of concern November 26.

Since health officials and researchers have known what to look for, the new variant has been detected in around two-dozen countries on five continents, with the number rising by the day.

The news prompted many countries, including the United States, to ban travelers from several southern African countries, some of which have not reported any Omicron cases. Bans have not been imposed, however, on countries in Europe, Asia, or the Americas where the variant has been found, leading some to suggest that the restrictions punish South Africa for promptly putting out the alert.

South Africa has seen the largest number of cases to date, at around 75. Cases have recently risen steeply in the Gauteng province in recent weeks, but it is possible the variant was circulating earlier at a low level in southern Africa or elsewhere without causing a surge.

"When a highly transmissible respiratory virus is found in multiple countries, as Omicron has been found, it is usually everywhere," Dr. Monica Gandhi, director of the Ward 86 HIV clinic at Zuckerberg San Francisco General Hospital, told the Bay Area Reporter. "I agree with the World Health Organization that travel bans are ineffective and discriminatory."

Much remains unknown
Global experts emphasize that much remains to be learned about the variant, and that it will take at least a couple of weeks to gather this information.

Omicron has more than 30 mutations — far more than previous variants — many of which alter the spike protein the coronavirus uses to enter cells. Some of these are the same mutations that appear to make the Delta variant so transmissible, but it is not yet clear whether the new variant is more easily transmitted in the real world. It is also not certain whether Omicron is outcompeting Delta or was able to emerge because Delta cases were so low in South Africa at the time.

It is also unclear whether Omicron causes more, or perhaps less, severe disease. Numerous reports from around the world have indicated that a majority of people with the variant — like the case in San Francisco — have had mild illness, with more severe symptoms largely seen in unvaccinated people. (Only around a quarter of people in South Africa are fully vaccinated, and the rate drops to less than 5% in many other African countries.) But, like previous variants, Omicron may cause severe illness in elderly people and those with underlying health conditions.

A third concern is how well the new variant can evade immunity from prior infection or vaccination, as well as monoclonal antibody therapies. Early evidence suggests Omicron might be more likely than Delta to cause breakthrough infections in vaccinated people, but again, more information is needed.

On the other hand, the oral antiviral medications molnupiravir and Paxlovid do not act on the coronavirus spike protein and should continue to work. A federal Food and Drug Administration advisory committee narrowly recommended authorization of Merck's molnupiravir November 30, and it could be available within days.

With so many changes in Omicron spike protein antigens, antibodies may lose some ability to recognize and neutralize them. But antibodies don't tell the whole story. Memory B cells and T cells also play a role, with the former providing longer-lasting protection and the latter guarding against severe disease. The three vaccines authorized in the United States — from Moderna, Pfizer-BioNTech, and Johnson & Johnson — produce antibody and cellular immune responses against multiple viral antigens, suggesting Omicron will not be able to escape them completely.

"B cells generated by vaccines can produce antibodies directed against variants they see in the future. T cell immunity is very robust and so should not be knocked out entirely by 32 mutations. And the vaccines produce polyclonal antibodies that work against multiple parts of the spike protein, so we should still have protection against severe disease," Gandhi said. "I doubt Omicron will spur a surge in areas of high vaccination, like the Bay Area. And remember, even with the Delta variant, San Francisco saw an increase in cases but, luckily, hospitalizations did not follow suit given our high vaccination rates."

Many experts think booster doses of the existing vaccines will increase protection against Omicron and other variants by raising antibody levels, at least temporarily. In light of the news, the U.S. Centers for Disease Control and Prevention November 29 strengthened its recommendation that all adults should get a booster.

Moderna and Pfizer are now testing their existing vaccines against the new variant as well as racing to develop Omicron-specific boosters.

In the meantime, health officials urge everyone to keep up — or resume — non-pharmaceutical precautions such as masking, hand-washing, ventilation, physical distancing, and avoiding indoor crowds, even as they push to accelerate vaccination.

"Vaccines continue to be our best way through the pandemic by safely protecting us against severe illness from COVID-19 and its variants," California Public Health Officer Dr. Tomás Aragón said in a statement. "We are doubling down on our vaccination and booster efforts to ensure that all Californians have access to safe, effective, and free vaccines that can prevent serious illness and death."