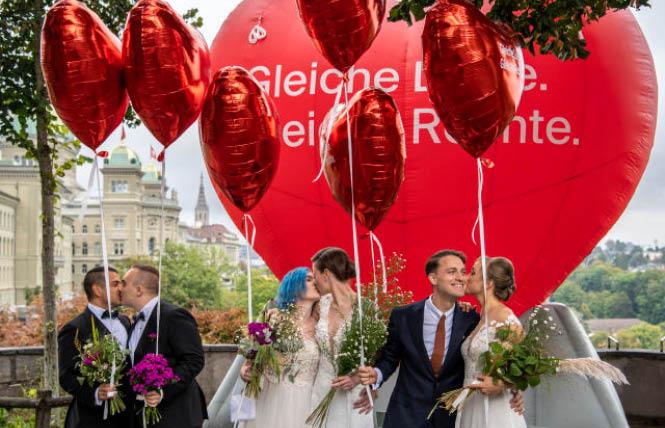 Swiss voters resoundingly approved the "Marriage for All" referendum with a 64.1% vote September 26, the Bay Area Reporter previously reported. The referendum was backed by Switzerland's parliament and the governing Federal Council.

The vote made Switzerland the third country in the world to pass same-sex marriage by popular vote. Ireland was the first in 2015, followed by Australia in 2017.

Switzerland is not a member country of the European Union. It was one of the few Western European countries not to have legalized same-sex marriage. Same-sex couples won the same rights as heterosexual couples with the vote. They can adopt, sponsor a spouse, access sperm donation banks, and more.

Switzerland will begin recognizing same-sex couples married abroad rather than downgrading their marriage to civil unions starting January 1, the Federal Council announced, reported the Associated Press. Civil unions, which have been legal since 2007 in the Alpine nation, will no longer be granted as soon as weddings begin, reported the AP. Couples already in a civil union will be able to retain their status without having to get married.

Switzerland's civil code will update the language for marriage registration from "bride and groom" to "the engaged" or "two people" per the new law.

Opponents support traditional families, with a mother and a father, and claim marriage should be only between a man and a woman. But more than 80% of Swiss voters supported marriage equality, according to a survey conducted by Pink Cross, a Swiss LGBTQ advocacy group, published in November 2020.

Marriage equality advocates anticipate hundreds of couples to take advantage of the marriage law next year.

Maria von Kaenel, co-president of the Marriage for All campaign, told Reuters, "We are really happy with the outcome of the vote, and that it is now being put into law" after 30 years of fighting for the right to wed.

Thailand's high court unanimously rejects marriage equality bill
Thailand's Constitutional Court last week unanimously upheld the constitution's definition of marriage as being between a man and a woman. The court punted the issue back to the Southeast Asian country's government and parliament, stating elected leaders "should draft laws that guarantee the rights for gender diverse people," reported the Chiang Rai Times.

Currently, a marriage equality bill introduced in 2020 is awaiting to be debated, reported the Bangkok Post.

Gay couple Permsap Sae-Ung and Puangphet Hengkham, who have lived together for a decade, filed the lawsuit after the Phasi Charoen District Office rejected their marriage registration request. They are represented by Thai advocacy group the Foundation for Sexual Orientation and Gender Identity Rights and Justice, which has fought for same-sex marriage.

The foundation challenged Section 1448 of the country's Civil and Commercial Code, which limits marriage to between a man and a woman. The group argued that limiting marriage to heterosexual couples violated the constitution's equality clause.

Thailand is perceived to be an LGBTQ-friendly country, but until recently the country's LGBTQ community hasn't had legal protections. In 2018, the Thai cabinet approved a civil partnership bill. The cabinet granted nearly all the rights of marriage in a second version of the government-backed civil partnership measure in 2020.

Many LGBTQ activists criticized the proposed civil partnership bill due to it stopping short of granting full rights recognized under marriage.

He noted that the civil partnership bill was returned to the Justice Ministry for review.

"The same-sex marriage draft law is in the hands of the weak opposition party," Muntarbhorn told the paper. "There is little chance of it being reviewed by parliamentarians at the moment. It is a pity."

"Thailand lacks political commitment to push it through. It is not the top priority of those in power," he added, stating that activists should "go ahead" with either bill stating "it could go either way."

Taiwan to host Asia's first WorldPride
Asia will host its first-ever WorldPride in Taiwan in 2025.

"This is the beginning of a four-year journey that we plan to ignite change in Asia, to promote InterPride's mission, and to advance human rights in the world," stated Darien Chen, the official spokesperson for Kaohsiung Pride, in a November 13 InterPride news release.

This is a second big win for Taiwan denoting its leadership in LGBTQ rights in Asia. In 2019, Taiwan became the first country in Asia to legalize same-sex marriage.

The announcement of Taiwan's big win came with some controversy.

InterPride made an international faux pas with its news release. The network referred to the Southeast Asian island as the "region of Taiwan," implying the People's Republic of China's sovereignty over the island, which is the gateway to the South China Sea, a global hotspot.

Taiwan's LGBTQ community has brought the island's struggle to the global queer community's attention. In 2018, LGBTQ Taiwanese athletes raised Taiwan's flag at the Gay Games in Paris, France, despite the People's Republic of China pressuring the Federation of Gay Games and the athletes against recognizing Taiwan's autonomy.

InterPride revised its release to state "Taiwan" and to indicate its autonomy from China, on November 16.

"Bringing WorldPride to East Asia for the first time will create a significant impact to the much-needed visibility and awareness of human rights for the LGBTQIA+ community there," stated Julian Sanjivan, co-president of InterPride.

Sanjivan noted that WorldPride in Taiwan will allow for millions of people from the surrounding countries and regions — the People's Republic of China, Hong Kong, Japan, South Korea, Malaysia, Singapore, Thailand, the Philippines, Vietnam, and Indonesia — to participate in the global pride event.

Australia will host the next WorldPride in 2023 with Sydney WorldPride, marking the country's fifth anniversary of winning same-sex marriage.

San Diego's LGBTQ neighborhood, Hillcrest, will be highlighted, along with the region's binational collaboration with Tijuana, Mexico, according to the release. San Diego and Tijuana share the busiest border crossing in the Western Hemisphere.

InterPride is a network of pride celebrations around the world and produces WorldPride. Founded in the U.S. in 1982, the network grew into a global organization with member organizations from Canada, Mexico, and the United Kingdom by the late 1980s. WorldPride was established in 1997. Rome hosted the first WorldPride in 2000.

Out in the World: Global Black Pride announces 2022 in-person event and leadership team
Sign up!