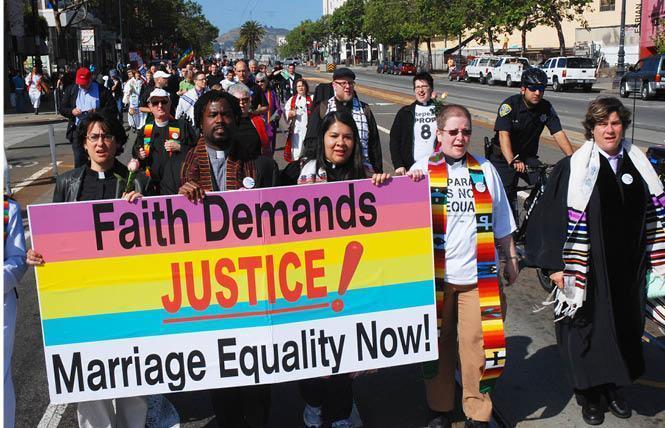 Tapes of the 2010 San Francisco federal trial that first struck down California's same-sex marriage ban as unconstitutional can be released to the public, a three-judge panel of the 9th U.S. Circuit Court of Appeal ruled in a 2-1 decision November 18.

The saga over the tapes has lasted longer than the saga over Proposition 8 — the same-sex marriage ban approved by Golden State voters in 2008 — itself.

Fletcher ruled that proponents of Prop 8, who'd wanted the tapes to remain under seal, failed to show sufficient injury. They had appealed a July 9, 2020 decision by Judge William H. Orrick of the U.S. District Court for the Northern District of California ordering the release of the tapes.

The root of the saga over the tapes began in 2010. The constitutionality of Prop 8 was challenged in Hollingsworth v. Perry, a federal lawsuit that appeared in the court of Judge Vaughn Walker.

The idea was floated about televising the trial, which attracted national public interest, in other courthouses. The California Supreme Court issued a stay of the proposed broadcast, but Walker continued to tape the proceedings in case the stay was lifted. Subsequently, Walker stated that the tapes were being made in order to aid in his consideration of the testimony and evidence during the trial, saying at the time "it's not going to be for purposes of public broadcasting or televising."

Walker, a federal judge appointed by former President George H.W. Bush, ruled that Prop 8 was indeed unconstitutional. The U.S. Supreme Court ruled in 2013 that Walker's ruling could go into effect, two years before the nation's highest court legalized same-sex marriage in all 50 states in the case of Obergefell v. Hodges. Walker came out as gay after his ruling, and retired from the bench in 2012.

The Northern District of California placed the tapes under a 10-year seal in accordance with its rules. Trial transcripts, however, formed the basis of both a stage production and a network television docuseries.

That seal expired in 2020. Prop 8 proponents sued to stop the release of the tapes, alleging that they may be subject to harassment or intimidation as a result, and that releasing the tapes ever would be a violation of Walker's statement they'd not be used for broadcast. Last summer, Orrick ruled that the tapes should be released, but the proponents appealed to the 9th Circuit, which as the B.A.R. reported last August kept the tapes sealed while it could consider the case.

The 9th Circuit found that the Prop 8 proponents hadn't proved they'd be victims of harassment or intimidation, and that Walker's statements shouldn't be read as a perpetual promise.

"This is yet another sad chapter in the story of how the judiciary has been willing to bend or break its own rules and standards in order to publicize the proceedings of a single high-profile trial," Ikuta wrote.

Ikuta argued that the injustice is that the Prop 8 proponents' expectations, based on Walker's statement, had been dashed.

"The breach of a contract or binding promise is an injury traditionally recognized as a violation of a private right, whether or not the injured party suffers economic or other damage," Ikuta wrote.

Reaction
Thomas Burke, an attorney for KQED-TV, stated to the B.A.R. that he is pleased with "a hard fought and important victory for the right of access to court proceedings."

"For over a decade, KQED has led the fight for the public to be able to see the video recordings of this historic federal trial over same-sex marriage," Burke stated. "The 9th Circuit appropriately rejected the proponents of Prop 8 — who failed to offer evidence that anyone would be injured by this unsealing."

When asked if he expects an appeal to the U.S. Supreme Court, or when he expects the tapes will ultimately be released, Burke stated, "I don't have any insights into what the proponents will do next. There is no certainty (at the moment) as to when the videos will be released — any deadline will be affected by any number of potential next steps that the proponents may exercise."

Andrew Pugno and Charles J. Cooper, attorneys for the proponents, did not respond to requests for comment as of press time. That said, John Ohlendorf of Cooper & Kirk told Reuters that he plans to seek further review, stating that the decision is a "breach of Judge Walker's promise that they would never be made public."

The Reporters Committee for Freedom of the Press, which is headquartered in Washington, D.C., filed an amicus curiae (friend of the court) brief May 13, 2020 stating that the tapes should be released. The brief was joined by 36 media organizations, as the B.A.R. reported at the time.

Shannon Jankowski, a senior legal fellow with the Reporters Committee, stated to the B.A.R. that the nonprofit is pleased with the ruling.

"The landmark Perry decision is a part of American history, and there continues to be great public interest in the events of the trial," Jankowski stated. "We're pleased that, after more than 10 years, these recordings may finally be made available to the public, journalists and historians."