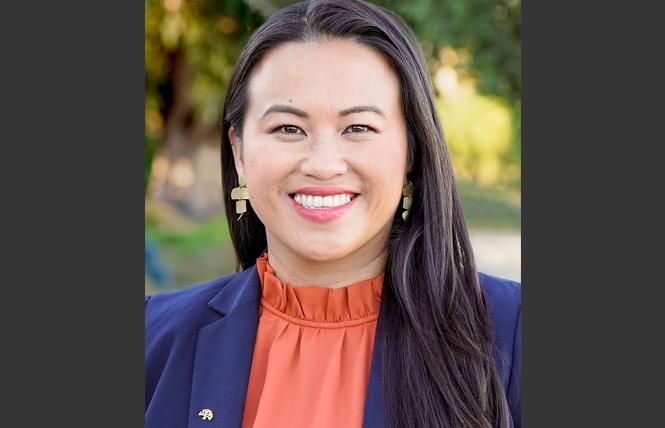 An Oakland City Councilwoman formally entered the 2022 mayor's race Wednesday, pledging to make change and bring the city together.

Sheng Thao, currently the mayor pro tem on the council, planned to make her announcement in West Oakland after her campaign sent out a news release. She would be the second councilmember to announce a mayoral run. Mayor Libby Schaaf is termed out of office.

"My values, commitment to service, and drive to make a difference are rooted in where I come from," Thao stated in the release. "As councilmember, I'm inspired every day about the chance to make change for those who need it most. And I've shown it's possible to be progressive and effective at City Hall. That's how I've brought the council together to break gridlock and deliver real progressive victories on affordable housing, homelessness, and public safety."

Thao, 35, represents District 4 on the council, which includes the Montclair, Crestmont, Dimond, and Piedmont Pines neighborhoods. She first won election in 2018 and is the first Hmong American woman to be elected to a city council in the state of California and the first Hmong to be elected in the city of Oakland. A straight ally, Thao is a single mom and domestic violence survivor.

Prior to winning election to the City Council, Thao served as chief of staff to lesbian at-large City Councilwoman Rebecca Kaplan, who twice ran unsuccessful bids to become the East Bay city's mayor. It had been speculated that Kaplan, now vice mayor, would again launch a mayoral bid in 2022 but she endorsed Thao Wednesday.

In a text message later that night, Kaplan praised her council colleague.

"I have worked with her closely and have experienced her thoughtfulness and her commitment to serve everyone in our community," Kaplan wrote. "She is a dedicated, smart, effective leader."

Thao was recently in the news when she changed her mind on funding for police academies in Oakland. As the San Francisco Chronicle reported in September, the council decided to add an extra academy to increase the number of officers on the streets. Thao had opposed the extra academy in June, but said she would be open to it in the future. Residents throughout the city — including some in Thao's district — had pressured leaders to add more police resources, the paper reported. The additional police academy passed 6-2, with council President Nikki Fortunato Bas and Councilmember Carroll Fife voting against it.

Bas has also endorsed Thao, according to the release.

"Sheng Thao's life experience, her deep understanding of the challenges facing our communities, and her broad record of progressive change at City Hall have prepared her to lead this great city," stated Rob Bonta, who represented Oakland in the state Assembly for nearly a decade. "Sheng is the true public safety candidate, because she knows we need better public safety, not just more officers on the streets. She knows we need prevention, community investment, and to address the root causes of crime to stop the violence. When she is mayor, I look forward to working with Sheng on smart, sensible, progressive solutions to make Oakland safer and more just for all."

Added Mia Bonta, who succeeded her husband in the Assembly after Governor Gavin Newsom tapped Rob Bonta to be AG: "I'm fired up to be supporting Sheng Thao for Oakland mayor. Sheng is bold, inspiring, creative, and incredibly effective. Her dedication to children, youth, and families, and to lifting up our diverse communities is second to none. She will make Oakland proud as mayor."

Thao is not the only City Council member who aspires to be mayor. In early October, District 6 Councilman Loren Taylor announced he was running. Taylor's district includes the neighborhoods of Havenscourt and Millsmont. He is married to Erica Taylor and the couple have two children.

"It's an honor to have this particular list of Oakland leaders endorse me," Taylor, 44, stated in a news release. "Together they represent the very best of The Town's municipal, civic, and religious organizations."

Another candidate has also entered the race. Allyssa Victory announced her campaign November 2. If elected, she would be Oakland's first Black female mayor. According to her campaign, Victory (born Villanueva, she stated in a release) has been endorsed by several queer leaders, including gay San Leandro Vice Mayor Victor Aguilar Jr., and gay San Leandro school board member James Aguilar (no relation), and nonbinary New Haven Unified School District board member Mel Sheun-Mallory. Victory has also been endorsed by Albany Mayor Ge'Nell Gary, currently the only Black woman mayor in the East Bay.

Updated, 11/10/21: This article has been updated with additional comments.

Updated 11/11/21: This article has been updated with comments from Rebecca Kaplan.