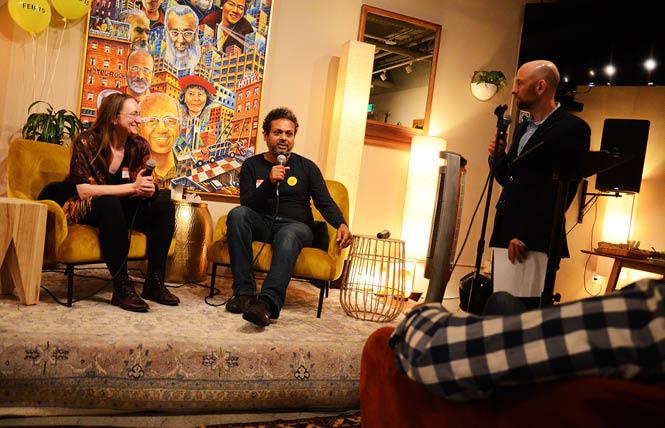 Just as the campaign to oust three members of the San Francisco Board of Education formally kicked off November 4, a big name in city politics endorsed the effort.

Gay state Senator Scott Wiener (D-San Francisco) announced his support in the hours before the recall's launch event at Manny's, the gay-owned cafe and event space in the Mission neighborhood.

The three members of the San Francisco Board of Education up for recall are board President Gabriela López, Vice President Faauuga Moliga, and Commissioner Alison Collins, who was ousted from the vice president position earlier this year by her board colleagues. The election will be held Tuesday, February 15.

Wiener stated November 4 that the Board of Education is "in dire need of change."

"Families are pulling their children from our schools, and enrollment is at its lowest level in decades," Wiener stated, arguing that "these three Board of Education members have consistently focused on politics instead of students.

"Last year, the Board of Education should have been singularly focused on safely reopening our schools," Wiener stated. "Instead, they voted against hiring a consultant to help with that process. The district faces dire financial challenges and needs strong and responsible leadership to right the ship. We need leadership that prioritizes and uplifts all of our students and that is fully focused on their well-being over personal political priorities."

The recall effort's launch rally was moderated by Joel Engardio, a gay man who is vice president of Stop Crime SF and who has twice unsuccessfully ran for District 7 supervisor.

"We had close to capacity at Manny's for the recall launch (about 80 people)," he wrote in a November 5 email. "Senator Scott Wiener is perhaps the most influential thought leader in San Francisco politics and it's a big deal that he has endorsed the recall of all three school board commissioners on the ballot. He made a strong and convincing case why all three commissioners — Collins, López, and Moliga — failed at their jobs and caused unnecessary harm to students and families."

Critics of the trio, who were all elected in 2019, argue they deserve to be removed due to their poor handling of the district's finances, COVID-19 response, and approach to various other issues, such as rejecting a gay white father for a parental advisory body. Their supporters contend the recall is a right-wing attempt to oust the three progressive Democrats from office, a case Moliga made in a Bay Area Reporter guest opinion on October 6.

Recall the SF School Board leaders Autumn Looijen and her partner Siva Raj, who is a bisexual parent, did not immediately respond to a request for comment.

The San Francisco County Democratic Party Central Committee, or DCCC, voted May 26 to condemn the recall effort, alongside the failed effort to recall Governor Gavin Newsom, and the effort to recall San Francisco District Attorney Chesa Boudin, which achieved likely ballot access last month but for which a date has not been set.

Moliga is an elected member of the DCCC.

Lightning rod
The San Francisco Board of Education became a lightning rod in part for deciding to rename dozens of schools — including George Washington High School in the Outer Richmond and Dianne Feinstein Elementary School in the Outer Sunset — during the pandemic lockdown. The board later rescinded that vote, which critics said lacked historical research.

But things came to a breaking point in March when Collins' 2016 tweets resurfaced in which she accused Asian Americans of "white supremacist thinking to assimilate and 'get ahead.'" Collins was subsequently removed as vice president of the board and from her seat on various committees. She responded by filing an $87 million suit against the district and other board members, which was tossed by a federal judge. Collins later dropped the lawsuit after the judge's decision.

Wiener stated that the three members "severely harmed the school district and its students" due to these actions, and also because they didn't "engage significantly with the community" before "stripping ... Lowell High School [near Lake Merced] of its merit-based admissions process."

Moliga told the B.A.R. that he read Wiener's remarks.

"Senator Weiner's rationale for supporting the effort to recall me is based on incorrect facts about my work. He is perpetuating the disinformation of the recall campaign, most of which I addressed in a Medium post last week," Moliga stated in a November 5 email. "I am not familiar with Mr. Mahmood's comments regarding my recall, therefore I cannot respond."

López and Collins did not respond to requests for comment.

Moliga was referring to Bilal Mahmood, a straight ally and former Obama administration official running for the Assembly seat vacated by City Attorney David Chiu earlier this week. Mahmood also came out November 4 in favor of the recall.

"These three board members have failed to do their job," Mahmood stated. "Instead of focusing on getting kids back in the classroom, they prioritized performative politics, choosing to move forward with renaming schools rather than figuring out how to get students back in the classroom. They even voted against a contract with a consultant to facilitate the reopening of schools. It also came to light that Alison Collins has used anti-Asian rhetoric in the past, which she has refused to apologize for. It's time we held them accountable for the harm they have caused SFUSD students and families."

"Bilal Mahmood's endorsement of the school board recall is a profile in political courage," Engardio stated. "Bilal is a political newcomer and it takes courage to make a principled stand that separates you from the rest of the pack waiting to see where the wind blows. Bilal's stand makes his campaign tagline all the more relevant: It's time for a change."

Also running for the Assembly seat is Selby, a straight ally who is a City College of San Francisco trustee. She told the B.A.R. November 5 that she is in favor of the recall effort. She said that she was on a committee with Board of Education members and was frustrated that there'd been no plan to reopen the schools.

"Not until the recall happened did the president of the board [López] change what she was saying," Selby said.

Also running for the Assembly seat is David Campos, a gay man who is currently on leave as chief of staff to Boudin and who until earlier this year was chair of the DCCC, and District 6 Supervisor Matt Haney.

Campos stated to the B.A.R. that "barring egregious misconduct, elected officials should be allowed to serve the term that the voters elected them to serve." Therefore, he is in favor of recalling Collins, but not López or Moliga.

"As chair of the San Francisco Democratic Party, I supported a resolution in May to publicly condemn all of the recall efforts, and will continue to be a loud voice of opposition to the recall of Chesa Boudin," Campos stated. "I am also against the recall of BoE President Gabriela López and Vice President Faauuga Moliga. However, when I receive my ballot I will be voting to recall member Alison Collins. I could not stand in solidarity with my Asian American husband and vote otherwise."

Haney did not respond to a request for comment.

Gay District 8 Supervisor Rafael Mandelman stated to the B.A.R. that he is in favor of the recall of Collins, but "I have not taken a position on the others."

Wiener says 'no' to Boudin recall
When asked after his November 4 announcement whether he also supports the Boudin recall, Wiener responded via text message with a simple "no."

Mahmood stated he has not yet made a decision on the Boudin recall.

"I am 100% for criminal justice reform," he stated. "We need to ensure we right the wrongs of prejudicial police practices, and ensure there is a better social safety net for those reintegrating back into the workforce. But we also must acknowledge the nature of crime in San Francisco has changed. We've had a spike in anti-Asian hate crimes reported in the last year, and a spike in home burglaries. People don't feel safe. I'm still weighing my decision on the recall accordingly."

Selby, too, didn't make a commitment.

"I don't have a position on the Chesa Boudin recall yet," she said.

Mandelman stated he has no position on the attempt to recall Boudin. Haney did not respond. Campos is opposed.