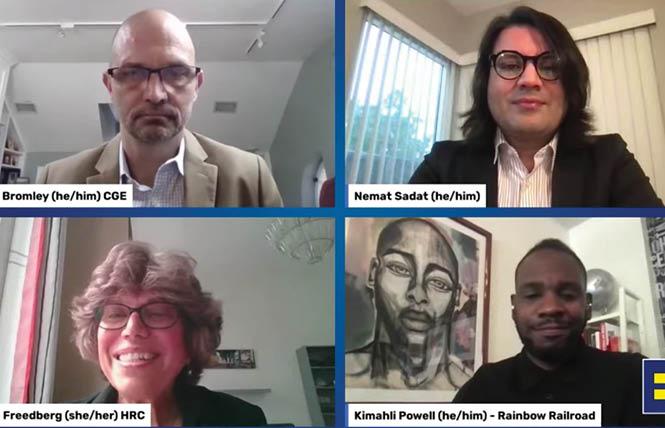 A coalition of LGBTQ global human rights organizations recently delivered 10,500 signatures to the White House calling for the adoption of its 10-point action plan to evacuate and support LGBTQ Afghan refugees from the war-torn country.

The Human Rights Campaign, along with the Council for Global Equality, Immigration Equality, International Refugee Assistance Project, Rainbow Railroad, and the Organization for Refuge Asylum and Migration urged the Biden administration to adopt their plan to expedite and ease the refugee process for LGBTQ Afghans following the Taliban's takeover of Afghanistan in August.

Delivery of the signed petition comes a month after a virtual HRC panel discussion in September during which LGBTQ global activists and lawmakers urged people to place more pressure on the United States to act on behalf of queer Afghans.

Gay Congressman Chris Pappas (D-New Hampshire) called the threat to LGBTQ Afghans "a clear and present danger" during a pre-recorded portion of the virtual panel discussion posted to YouTube September 29.

Pappas spearheaded one of two critical letters sent to Secretary of State Antony Blinken in August. Pappas' letter was signed by 63 of his colleagues in Congress and delivered August 24. The congressmembers criticized President Joe Biden's administration for its lack of publicly announcing the prioritization of the evacuation of LGBTQ Afghans, among other issues with the sudden withdrawal.

Canada is the only country to date that has publicly committed to resettling LGBTQ Afghans. It has stated it will assist a total of 20,000 Afghans to resettle in the country.

Two months after the requests and the fall of Afghanistan to the Taliban, progress has yet to be made, stated an October 22 news release announcing the delivery of the petition to the Biden administration.

The joint release pointed out that "there continue to be alarming reports about LGBTQI Afghans facing increased violence and persecution."

"The 10,000-plus people who signed our petition have demonstrated that they want the United States, long a beacon of refuge for those fleeing persecution, to take action to protect LGBTQI Afghans — a vulnerable group who risk oppression, even death, simply for who they are or who they love. Now is the time for action," Winterhof stated.

Pappas talked about the importance of the issue during the panel discussion.

"The United States has the power to protect the lives of countless individuals who face living under a regime who threatens their very existence," he said. "And we've got to use that power for good.

"In the face of the current reality in Afghanistan more is needed, and it is needed now," he continued, calling out the administration for not publicly declaring the U.S.'s policy to protect and resettle LGBTQI Afghans.

"LGBTQI people in Afghanistan are the most vulnerable people in the most dangerous country right now," said Sadat. "We face a menacing group of people: tyrannical terrorists."

LGBTQ Afghans are being turned in to the Taliban by family members and other Afghans for "social credit," he said. "Anybody who does not will receive the same punishment as LGBT people, which is imminent death."

LGBTQ Afghans, in particular queer activists, are essentially on a "Taliban hit list" after 20 years of coming out and advocating for their rights during the country's occupation by NATO, U.S., and allied governments, despite same-sex relationships being illegal in the country, Sadat explained.

"[What] the Taliban are doing and will continue to do is nothing short of what the Nazis did," Sadat said, likening queer Afghans to Jewish and LGBTQ people in Nazi Germany during the Holocaust. LGBTQ Afghans are on the run within the country, hiding, and seeking any way out of Afghanistan, multiple outlets have reported.

The list of more than 1,000 identified LGBTQ Afghans contacting the coalition organizations and activists to help them escape is growing, but still, it is only "scratching the surface" in a country of nearly 40 million people, said Sadat.

The situation is even more dire for LGBTQ Afghans without resources, said Sadat, who launched a GoFundMe campaign to rescue and resettle LGBTQ Afghan refugees in the U.S. late last month. As of October 28, he has raised $9,971.

"These are the people at the frontline fighting and championing for LGBTQ rights," Sadat said, stating they would be a force to help queer Afghans in Afghanistan. "They can provide so much oxygen for the people inside the country."

"Everyone was caught off guard at the rapid pace of the fall of Kabul," he said. "We weren't prepared for it, and it was utter chaos."

It's a situation that has left activists like Sadat "placed in this position to protect hundreds if not thousands of Afghans that are displaced right now," Powell said.

"The reality is that the U.S.'s refugee program was completely broken," when the Biden administration inherited it, Powell said, pointing to Trump's slashing the number of resettlement refugees in the American program from upward of 125,000 annually to 15,000.

In a September 13 statement, Blinken announced that the U.S. is providing nearly $64 million in new humanitarian assistance, as the Bay Area Reporter previously reported.

Unique challenges
Afghanistan presents unique challenges that compound LGBTQ and other activists working to get queer Afghans out of the country on top of the broken refugee program.

Echoing what Sadat said in a previous interview with the B.A.R., Powell pointed out the normal networks LGBTQ activists work with inside countries, such as LGBTQ organizations, didn't exist and staff from the few human rights organizations in Afghanistan evacuated during the withdrawal.

He noted the fact that Afghanistan is surrounded by other anti-LGBTQ countries, therefore there is no single safe harbor nearby.

Rainbow Railroad has had to implement its own workarounds to mitigate the situation, Powell said, by building "any sort of collations to get people out," acting carefully, and not relocating people "to LGBTQ-unwelcoming countries.

"We are really careful not to further displace someone or relocate to another place that is also dangerous for them," Powell said. He added the organization continues to seek opportunities for evacuation to safe countries, working with other organizations and governments.