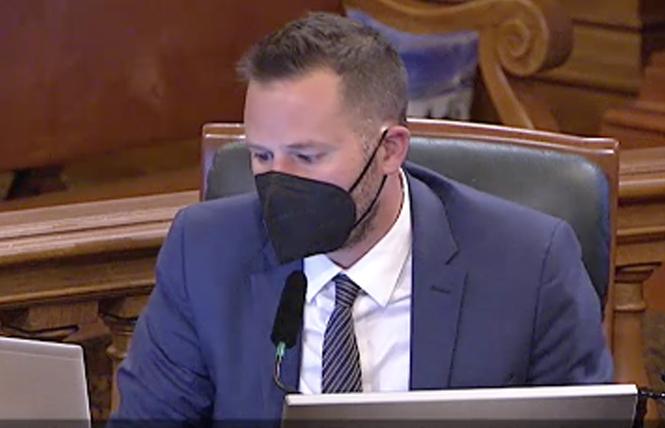 Haney represents District 6, which includes the overdose hotspots of the Tenderloin and South of Market. (He is also running for the state Assembly seat that will soon be vacated when Democratic Assemblyman David Chiu becomes San Francisco city attorney.) He introduced a resolution in September urging the mayoral action, as the Bay Area Reporter reported at the time, in order to pave the way for the city to authorize, fund, and implement safe consumption sites.

Safe consumption sites (also called supervised injection facilities) are places where drug users can consume pre-obtained drugs under the eye of trained staff. Advocates argue it is necessary to implement in San Francisco, where the number of accidental drug overdoses dramatically rose from 259 in 2018 to 712 in 2020 — and is on track for a similar death toll this year.

McCoy did not give a statement by press time.

Speaking before the board, Haney thanked his colleagues at the board's Public Safety and Neighborhood Services Committee, which held a hearing on the subject October 14, as the B.A.R. previously reported, as well as advocates from the Safer Inside Coalition — a coalition of health agencies including the San Francisco AIDS Foundation — that advocates for harm reduction approaches.

The AIDS foundation did not immediately respond to a request for comment.

"This is an emergency in our city if there ever was one," Haney said at the meeting. "I think it's important that we as a Board of Supervisors stand united in calling for more sweeping action."

Haney also thanked Breed's office. Breed is publicly supportive of safe consumption sites, but only if state law is changed first. She has been publicly noncommittal on Haney's nonbinding resolution.

"The mayor's position is the same as it has been: We are continuing to act with urgency to implement programs and policies to respond to the overdose crisis in San Francisco, like deploying our Street Overdose Response Team or opening SOMA Rise, our new Sobering Center," Cretan stated. "We know the members of the Board of Supervisors share that sense of urgency, however it is unclear how this proposed policy could practically allow us to do anything we cannot already do today."

An effort to change state law — gay state Senator Scott Wiener's Senate Bill 57 — has been stalled in the state Legislature until next year.

When reached for comment October 26, Wiener (D-San Francisco), directed the B.A.R. to his previous statement of October 14.

"I'm committed to authorizing safe consumption sites under state law, and I'll work to advance SB 57 next year," Wiener stated. "I have no problem with San Francisco confronting this public health crisis by moving forward ahead of the state. Moving forward without state authorization raises various complicated legal issues. I'm confident Mayor Breed — who is a champion for this and other harm reduction strategies — will make a thoughtful decision on how to proceed."

"Today the Board urged Mayor Breed to declare the overdose crisis an emergency and open overdose prevention sites, which have saved countless lives in Europe and Canada," Mandelman wrote. "Thanks to Gary McCoy for putting your health on the line to remind us that this is a matter of life and death."

David Campos, a gay man who is currently chief of staff to San Francisco District Attorney Chesa Boudin; Thea Selby, a straight ally who is a City College of San Francisco trustee; and Bilal Mahmood, a straight ally who is a former Obama administration official; are all running against Haney for Assembly. In a statement after the vote, Campos was praiseworthy of people pushing government action but wrote that Haney's resolution was a "gesture."

"I have tremendous respect for the activists who have been pushing for this resolution," Campos stated to the B.A.R. "However, with so many of our friends and neighbors dying on the streets, our elected officials need to move beyond symbolic gestures. The activists fighting day and night around these issues, and those in the community suffering, deserve concrete action, not just nonbinding resolutions."

When asked what the supervisors should do instead, Campos said that policymakers need to address income inequality by passing a universal basic income and a "true living wage." He also said that mental health care disparities should be addressed.

"We need to do more on the ground in terms of mental health services," Campos said. "District 6 has been dealing with this for quite some time, and we should be flooding the Tenderloin with mental health outreach teams. Once we open a safe injection site and provide mental services to District 6 residents, there are other issues more to the root causes."

In a statement to the B.A.R. late October 27, Mahmood said that city officials need to step up efforts against drug dealing.

"This measure doesn't seem to do anything beyond what Mayor Breed is already working to implement," Mahmood said. "To save lives, it's imperative that the DA's office actually charge fentanyl dealers who have little to no accountability for the harm they are perpetrating on those who struggle with addiction. Safe consumption sites are a critical component, but cutting off the flow of fentanyl is essential."


Updated, 10/27/21: This article has been updated to include comments from Supervisor Rafael Mandelman and David Campos, who is one of the candidates running against Matt Haney for state Assembly.

Updated, 10/28/21: This article has been updated to include a comment from Assembly candidate Bilal Mahmood.