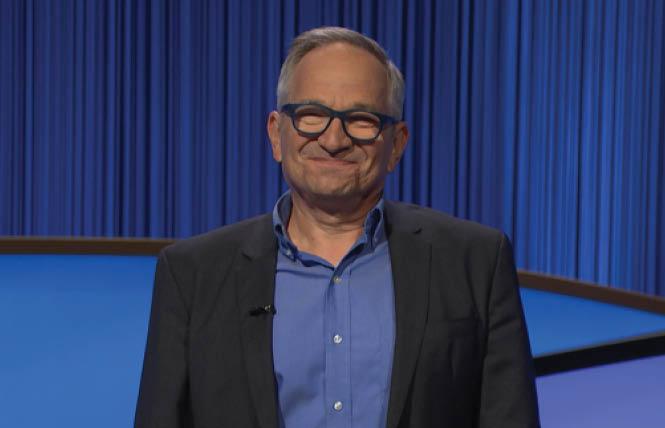 After some 40 years behind the lens, independent filmmaker Peter Stein stepped out in front of the camera recently to be a contestant on the popular TV quiz show "Jeopardy!"

When Stein, a 62-year-old gay man, mentioned his upcoming appearance on the show on his Facebook page, hundreds of friends and colleagues sent notes of congratulations, most wanting to know the same thing: how he fared.

"That's the one thing I'm not allowed to talk about," Stein, a San Francisco resident, told the Bay Area Reporter in a recent phone interview. He will appear on the program Thursday, October 28.

"Jeopardy!" of course, is the long-running TV game show. It was in the news earlier this year over the kerfuffle regarding its selection of a permanent host to replace the beloved Alex Trebek, who died last November after a battle with pancreatic cancer.

Turns out the experience in front of the camera was not the first time on stage for Stein. For a few years after college, Stein lived in Boston, hoping to launch a career as an actor.

"It didn't pay the bills," Stein said. So in 1983, he moved back home to San Francisco and began his media career, first in the tech world and then gigs with KPIX and KQED writing, directing, and producing a number of award-winning films, including "The Hidden Cities of San Francisco — The Castro" documentary, which won a Peabody Award. In 2003, Stein became the executive director of the San Francisco Jewish Film Festival and, eight years ago, was named senior programmer for Frameline, the San Francisco LGBTQ+ international film festival.

While it's still not known how much money Stein won on the show, "every contestant goes home with at least $1,000," no matter what their score, he said. (For many years, said Stein, each contestant got a set of Compton's encyclopedias.) "That just about covered the expenses of the trip," said Stein, who drove to Los Angeles with his longtime partner, Brian Freeman, and spent a few days after the taping visiting friends and relatives in Southern California.

"But I do have a few fun inside stories," Stein said about his day in Hollywood.

The taping
At 7 a.m. September 23, Freeman dropped him off at Sony Studios, on the historic campus of MGM Studios. "No friends or family" were allowed on the set, he said, and, due to COVID-19, there was no studio audience.

Twelve contestants who were the pool for that day's five show tapings were assembled for several hours on the soundstage of "Wheel of Fortune," where they were briefed on legal and technical matters of the show, given makeup and costume review (contestants bring their own clothes plus several changes in case they win and play multiple games). Then they moved to the "Jeopardy!" set for practice sessions where the actual tapings began. Stein and two opponents weren't called until late afternoon, he said.

"It was a very, very long day and I'm sure it was adrenaline that kept me going," he said.

His minutes of fame on screen "flew by," he said.

Those familiar with the show probably know that every contestant who makes it through the grueling screen tests appears to have a steel-trap mind. So when a reporter asked Stein when his family first noticed how bright he was, Stein said, "I'm blushing." After some prodding about intellectual honors, Stein conceded that he had graduated Phi Beta Kappa from Harvard College.

"But that doesn't necessarily help you succeed on 'Jeopardy!'," he said.

His parents, both trained as pharmacists, were fans of the show, "particularly my mom," said Stein. When he was in grade school, Stein remembers "watching game shows" as the "best part of having to stay home sick."

As a child, "I liked 'Jeopardy!' and was always very excited when I knew the answer," he said.

But Stein never became a dyed-in-the-wool game show fan. Over the past 10 years, before the pandemic, Stein said he rarely watched. But when the city shut down last year, "I got kind of hooked, taping all the shows and binge watching when I had a chance."

Stein said being a "Jeopardy!" contestant "wasn't any sort of life goal."

In August 2020, Stein noticed the show announced that during the pandemic, contestants would be allowed to audition online from home. "I thought, 'why not,'" he said. "I wouldn't have gone all the way to Los Angeles to audition."

The online screening process was time consuming, he said. A preliminary test was required, "just to see if you were a sentient person," he said. Then came a lengthier timed test online with 50 questions similar to those that would be on the show. While they didn't reveal his score, Stein was told he was in a pool of contestants that would be invited onto the show. Stein turned down the first invitation to appear in January — "it wasn't a good time for me," he explained — but when the second invite came, for a summer appearance, he said "sure."

Stein's taping was scheduled in the middle of the on-air winning streak of contestant Matt Amodio, who eventually racked up $1,518,601 in prize money during his 38 back-to-back wins. Because the show is taped six weeks in advance, "I didn't know if he'd still be on his streak and I'd have to compete against him," said Stein.

When he arrived on set he looked around and didn't see Amodio, and he and the contestants knew for the first time that he'd been knocked out. The next 11 hours were exhausting, said Stein. "But also fascinating," he said. "Everyone was very professional."

With extensive COVID precautions in place, Stein said his goal was to try to stay "mentally prepared" for his turn on stage. "I had called a friend who'd been a contestant who had advised me to relax and have a good time," which he tried to do, he said.

"My main motivation, to be honest," he said, "was just not to humiliate myself on national TV!"

But the rest of the details of the day on the set will have to wait until the show is aired.

"The producers are very strict," he said, noting that he had to get permission to speak to a reporter.

What's next for Stein? In November, KQED will air a new documentary, "Moving San Francisco," a look at the city's transit past and its future. Stein co-wrote and co-produced the film with colleague Jim Yager.

And how about another game show audition?

"Absolutely not," Stein said. "It was a once in a lifetime experience."