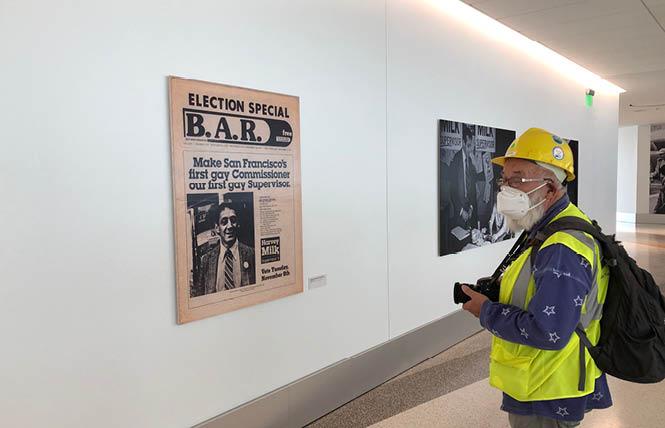 On Election Night November 7, 1978 Associated Press photographer Slava "Sal" Veder captured the late gay San Francisco supervisor Harvey Milk huddled with local LGBTQ advocates Gwenn Craig and the late Bill Kraus as they waited to see if California voters had defeated a homophobic ballot measure. Craig and Kraus co-led the local committee that worked with Milk to defeat what was known as Proposition 6, which would have banned gays and lesbians and their straight allies from working as public school teachers in the Golden State.

A "No on 6" poster featuring the Statue of Liberty can be seen in the background of the black-and-white snapshot, taken just weeks prior to Milk being assassinated inside San Francisco City Hall a mere 11 months into his historic term as the first openly gay elected politician in the city and state of California. The image was one of the 100 photos, correspondence, and campaign materials related to Milk's life chosen for a massive retrospective about the LGBTQ icon that for two years had adorned the Harvey Milk Terminal 1 concourse at San Francisco International Airport.

The installation was removed in the spring when more of the under-renovation aviation facility was unveiled for use by travelers, airlines, and concessioners inside the terminal. Initially affixed to a 400-foot construction wall meant to be ephemeral, the Milk exhibition has now been reworked into a more intimate portrait of the beloved gay leader by SFO Museum staff.

Roughly 70 of the images used in the terminal exhibition have been repurposed for a new exhibit about Milk's life located on walls totaling 1,070 linear feet along what is known as the Federal Inspection Services Corridor. Built atop the Milk terminal concourse, the corridor ferries passengers disembarking from international flights assigned to one of seven gates at what is known as the A side of SFO's International Terminal. 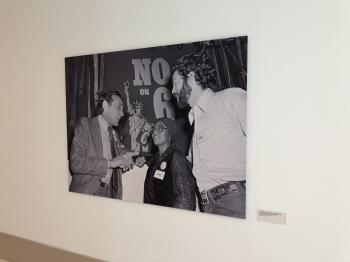 The photo of Milk, Craig, and Kraus has been mounted toward the end of the corridor near the U.S. Customs and Border Protection's passport control area. Technically speaking, the corridor isn't U.S. territory, as the federal government doesn't consider passengers to have officially arrived in America until after they have cleared customs.

Told of her photo gracing the corridor by the Bay Area Reporter, Craig said she has no immediate plans to travel internationally and wondered if she would ever seen it in person since it is in a secured area of SFO that isn't accessible to the general public. Nonetheless, Craig said she feels honored to be featured in the new exhibit.

"To see a moment captured in that photo that represents my role and participation in building a movement with Harvey is an honor beyond compare. So many LGBTQ people, young and old, flocked to San Francisco because Harvey gave them hope," said Craig, a Black lesbian who served on the city's police commission and led the LGBTQ Democratic club named after Milk. "Through his legacy, he continues to send this message, so it's appropriate that his face and his story is seen by all our visitors from throughout the world as representative of San Francisco's pride."

Sneak peek
Tim O'Brien, assistant director and curator of exhibitions for the SFO Museum, who worked on both of the Milk exhibits, provided the B.A.R. a sneak peek of the customs corridor installation Friday, October 22, ahead of its becoming operational. Incoming international flights are expected to begin using the gates accessed by the corridor as soon as November 16.

"It is much more emotional because you are immersed in the imagery," said O'Brien, a straight ally, of the new display.

O'Brien pointed to a diptych of black-and-white photos of Milk meeting with constituents in someone's living room as one example of how personal a look the new installation provides of the glass-ceiling shattering Milk.

"He was able to reach individuals with a level of intimacy few politicians are able to achieve," said O'Brien.

O'Brien's SFO Museum colleagues, curator Kai Caemmerer and graphic designer Jon Chester, devised the layout for the more intimate-feeling portrait of Milk's life. Whereas the previous exhibit felt massive with large photos and images hovering overhead — some 20 feet — of passengers as they traversed the Milk terminal concourse, the 73 images in the customs corridor are presented at eye level.

Found on both sides of the passageway, several correlating photos are grouped together in each section of walkway. A dozen images have been enlarged and attached to the wall using a vinyl application, providing several moments meant to grab travelers' attentions.

"We did want some pauses or punctuation points and visually you have more immersive imagery," explained O'Brien.

All the images are displayed in chronological order, starting off with a few photos depicting Milk's childhood and early adulthood in New York. But the vast majority of photos and documents reproduced relate to Milk's trailblazing political path in San Francisco during the 1970s.

"We did want to lead it with some family photographs," said O'Brien. "We start with Harvey in New York just before his departure for San Francisco followed by where our city's interaction with Harvey Milk begins."

Another change made to the exhibit is the identification panels for the images are now much shorter in length since the customs corridor is not an environment where people "are encouraged to stop for any great length of time," explained O'Brien.

Elsewhere in the Milk terminal is a smaller photographic presentation about Milk's life mounted in an inglenook area near where travelers check-in for their flights. The exhibit, titled "Harvey Milk: Messenger of Hope," utilizes 43 images submitted by the public and from the archives of the GLBT Historical Society and the James C. Hormel LGBTQIA Center at the San Francisco Public Library.

Both archival groups worked with SFO Museum staff on the larger exhibitions, allowing the photos and material from their archives to be repurposed for the customs corridor installation. It will adorn the passageway indefinitely for now, as there is currently no plan to remove it.

O'Brien credited the two archives with being "fantastic partners to the airport throughout this process" of creating the historical installations and exhibits featured throughout the Milk terminal.

Two new artworks inspired by Milk are to be installed in the terminal in late 2023. A small temporary Milk exhibit featuring 10 images now greets airline passengers inside the Milk terminal just after they exit the security gates. It is expected to remain up for two years in an area dubbed the retail alley, as construction on new eateries and stores is completed in that section of the concourse.

"For anyone from overseas flying to San Francisco through Harvey Milk Terminal 1 for the first time there is no mistaking where you are or who that terminal is named after," said O'Brien.