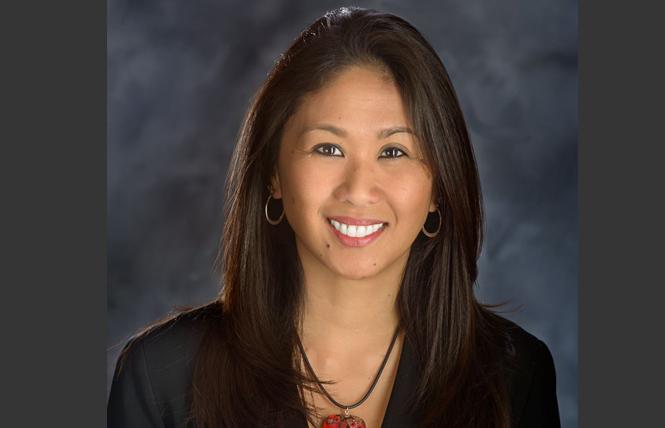 The mayor of Los Gatos has become the target of right-wing demonstrators who've visited her home on several occasions, including during a virtual meeting of the Town Council October 20.

"You need to find Jesus and get off the Goddamn political wagon you're on," a video obtained by the Bay Area Reporter shows an unnamed woman shouting outside Mayor Marico Sayoc's home October 16. "You're betraying all of us. You're betraying all of us including your husband and your son and your daughter. How dare you say there's systemic racism in this town? We all love everyone here but you political people brought this crap into this town. Fuck LGBTQ! It's a terrorist organization that has infiltrated this country with the help of [President Joe] Biden and [investor George] Soros and [former Secretary of State] John Kerry and the Heinz family.

"We don't want you here. We know all about you," she continued, asking if Sayoc resents her husband because he is white.

"Do you go to bed at night and say 'Hi honey; thanks for oppressing me?'" she said. "Sick. Sick."

The video-recorded incident is one of many, which have also occurred at several recent in-person meetings of the Los Gatos Town Council.

For example, at the September 7 meeting, members of the public began to heckle Sayoc after she cut off Bryan Paul, the head of the Los Gatos' Police Officers Association, when his time expired. Paul had been speaking about the town's dispatcher shortage.

The heckling led to the chamber being cleared and the meeting being delayed for over an hour.

The situation reached a breaking point during an October 5 meeting, when a member of the public, named Cyndi Sheehan, made allegations about Sayoc and her family during public comment.

Sayoc's husband, Jeffrey Scott, and Sheehan subsequently got into a verbal altercation. According to the San Jose Mercury News, Sheehan alleges Scott threatened her life, and she was granted a temporary restraining order by a Santa Clara County Superior Court judge October 14.

There was a 45-minute delay in the October 5 meeting while the town council chamber had to be cleared, again.

Subsequently, meetings of the Town Council were moved online, where they were once conducted because of COVID-19 precautions. However, at the October 19 meeting, Sayoc and Vice Mayor Rob Rennie reported that the demonstrators had assembled outside their homes while the council met, calling for their resignations.

Sayoc accused of helping 'anti-family,' 'anti-procreation' forces
Sayoc, who declined to comment for this report, began her second one-year term as mayor in 2020, having previously been mayor for one year in 2016-2017. She'd been a member of the Town Council since 2014.

Los Gatos, an unincorporated town of about 30,000, is southwest of San Jose in Santa Clara County, at the foothills of the Santa Cruz Mountains. It is probably most famous to outsiders for being the home of the corporate headquarters of Netflix.

The demonstrators have taken a stand against Sayoc's pro-LGBTQ policies.

The Town Council recently decided to paint a rainbow strip on the ground near Los Gatos High School, to use gender-neutral language in town ordinances, and to hire a diversity consultant, according to the Patch.

"She's promoting all of these groups, none of which are family-oriented," protester Lynley Kerr Hogan told KNTV-TV October 19. "All of these groups are anti-family, anti-family. Anti-procreation. That's kind of scary when you think of where we're going. We now have gender neutrality in our town — what's that about? We now have rainbow crosswalks."

They have also spoken out against COVID-19 vaccine mandates for police officers, and the teaching of critical race theory.

The letter, a copy of which was sent to Santa Clara County District Attorney Jeff Rosen and state Attorney General Rob Bonta, denounced the demonstrations. (Rosen's office did not return a request for comment Wednesday.)

"Bullying, harassment, and intimidation at public meetings are absolutely unacceptable on their own, but we were horrified to learn that the mayor — the only person of color on the Town Council — and her family have also been targeted away from town property," the letter states. "Based on video reports and anecdotal accounts our offices have received, we have concerns that this behavior is escalating based on incidents going back to March of this year."

Low and Cortese's letter alludes to the fact that similar incidents are occurring throughout the country.

"We are going through a generational crisis and our residents deserve bold leadership to keep residents and our public servants safe," they wrote. "We offer our services to support you as you take swift action in addressing the escalating tensions at recent Town Council meetings."

The Town of Los Gatos responded to Low's letter via tweet October 20 saying that "a formal response to all of the questions is forthcoming."

"The Town of Los Gatos takes the safety and the security of the mayor, council, and all members of the community very seriously," the tweet states. "This is one of our highest priorities as public servants. ... The town greatly appreciates the support of Assembly Member Low and Senator Cortese in response to unprecedented hateful and inappropriate speech at recent Council meetings."

A spokesperson with Bonta's office stated to the B.A.R. that "We're aware of the letter and we'll review it. Bottom line: there is no place for discrimination or harassment in California. Period."

"We stand with Mayor Marico Sayoc for her leadership and strength in standing for values and principles we all support," they stated. "We condemn the divisive and deplorable language that was used and directed at Mayor Sayoc and her family on October 5. These personal attacks on the mayor and her family have been growing increasingly vile for months. As a result, for the second time in three meetings, the Los Gatos Town Council had to remove the public from the council chambers because of this appalling and callous behavior by the public."

Daniel Moretti, the program manager with the Santa Clara County Office of LGBTQ Affairs, stated to the B.A.R. that "the anti-LGBTQ statements and actions made can have deeply harmful and traumatic impacts, especially given the public setting. During this difficult time, we want everyone to know that the Office of LGBTQ Affairs is an available resource for support for community members and their families."

The Billy DeFrank LGBTQ Community Center in San Jose did not respond to a request for comment.

Updated, 10/21/21: This article has been updated with comments from AG Rob Bonta's office and the Santa Clara County Office of LGBTQ Affairs.