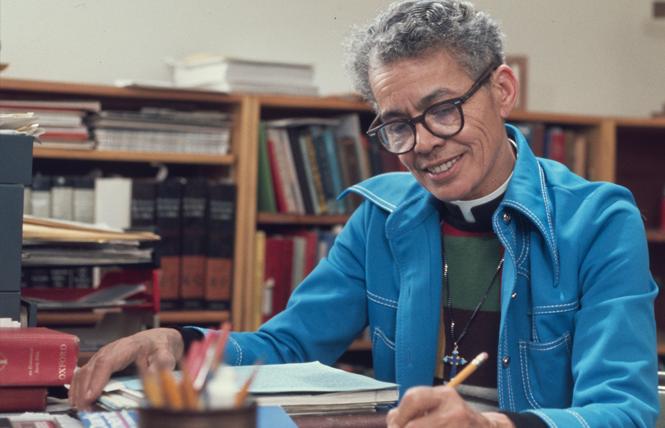 ... and they was a queer civil rights trailblazer left out of history books.

Murray and the film are featured on this week's Out in the Bay radio program and podcast. (Murray is also profiled in this week's Bay Area Reporter as part of LGBTQ History Month.)

Described as "ahead of their time" by the filmmakers for many reasons, Murray's legal writings are credited with laying the foundation for Brown v. Board of Education — the 1954 U.S. Supreme Court decision that outlawed racial segregation in public schools — and other landmark civil rights cases, including 2020's U.S. Supreme Court decision extending protections in the 1964 Civil Rights Act to LGBTQ employees 35 years after Murray's death.

Despite their contributions to the gender equality movement, Murray had a lifelong struggle with gender identity and sexuality. Or, as Murray historian Dolores Chandler puts it, Murray's struggle was with society.

"Pauli was always very self-possessed and I think had a very clear sense of who they were in the world," Chandler told Out in the Bay. "The word 'struggle' only comes into play because the world didn't respond kindly to Pauli trying to inhabit all of who they were."

As a child in the 1910s, young Murray and supportive Aunt Pauline, who raised her, had a deal: Murray could wear pants all week if she wore a dress to church on Sundays. Later in life, doctors were dismissive when Murray sought, for example — way ahead of the curve — testosterone decades before it was widely seen as a treatment. Murray's self-description in a note to one doctor: "One of nature's experiments: A girl who should have been a boy."

Would Murray have chosen they/them pronouns? "There's no way to know because this was not a live debate during Pauli's lifetime," said film co-director Julie Cohen, who noted that Murray briefly used traditional male names Pete and Oliver, but primarily used the self-selected "expansive gender-wise" name Pauli.

"I certainly understand why those who knew Pauli in life and always knew this person as a woman call Pauli she/her," Cohen said, "and I certainly understand for a lot of trans and nonbinary people today who are looking back into history for someone who, like, 'Oh my god, I'm so connecting to this person whose story I've been denied for so long,' using they/them helps to claim that."

We also hear directly from Murray in their own voice, as Murray recorded hours and hours of film and audio and saved boxes and boxes of written documents about their life, leaving behind a documentarian's dream treasure trove. Much of that footage is in "My Name is Pauli Murray;" some is included in this week's Out in the Bay.

Eric Jansen hosts and Kendra Klang produces of Out in the Bay — Queer Radio from San Francisco. Learn more and listen at https://www.outinthebay.org/

Out in the Bay: Gay CA Supreme Court justice values struggle to be authentic
Sign up!