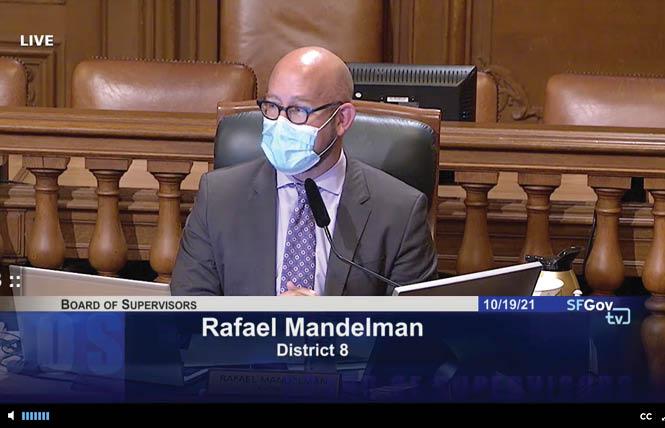 People going to the Castro for a night out may have more options under legislation introduced October 19 by gay District 8 Supervisor Rafael Mandelman that would allow additional bars in the LGBTQ neighborhood.

As the Bay Area Reporter previously reported, Suzie Jennings told the Castro Merchants Association last month that she wants to open a wine bar and "art and cultural space" in the old Unionmade location at 493 Sanchez Street at 18th Street.

However, Jennings can't do that now because new bars are not allowed within the Castro Street Neighborhood Commercial District, or NCD.

"That may come as a surprise to any of you who've visited the Castro," Mandelman said during the Board of Supervisors meeting as he introduced the legislation. "But the bars that are there were grandfathered in."

Since speaking with Jennings, Mandelman said that he's had the chance to discuss the question with a lot of folks in the neighborhood and in the broader, queer community ... and the general sense is that it's "unfair."

Nonetheless, not all the feedback was in favor of lifting restrictions.

"We've heard from stakeholders who don't want to see a saturation of the neighborhood with just bars," Mandelman said, echoing concerns from the September merchants meeting that were summed up by Terry Asten Bennett, a straight ally who manages Cliff's Variety on Castro Street.

"You don't want to take the cork off all together," Bennett said at that time, explaining why bars shouldn't be absolutely permitted in the Castro. "I think it's important to have the ability to pick and choose and I think what Suzy is proposing sounds fabulous."

There are three zoning categories: permitted, conditionally permitted, and not permitted. A conditional permit allows a business to open after a hearing and the opportunity for community feedback.

Mandelman told the board he hopes the legislation will "help the Castro become a more welcoming and diverse neighborhood."

In a statement to the B.A.R. after introducing the legislation, Mandelman elaborated on that point.

"It doesn't seem right or fair to totally preclude new folks, especially queer women, trans people, and people of color, from opening up in the neighborhood, and especially given the high level of commercial vacancies in the neighborhood," Mandelman stated. "The ordinance I introduced today would allow new alcohol-serving establishments to be permitted on a conditional case-by-case basis moving forward."

Neighborhood stakeholders expressed their support for the legislation to the B.A.R.

"The Castro Community Benefit District fully supports allowing conditionally permitted new bars to open in the Castro NCD," stated Andrea Aiello, a lesbian who is the executive director of the Castro/Upper Market CBD. "It is our belief that allowing for and encouraging change and new entrepreneurial energy is important to maintain the Castro as a thriving neighborhood commercial district. Allowing new bars to open in the Castro will also allow for increased diversity in ownership. The Castro CBD looks forward to welcoming these new owners, especially women and people of color."

The Eureka Valley Neighborhood Association has not taken a position on the legislation, but President Alex Lemberg, a queer, nonbinary person, stated that it is necessary "in order to more effectively serve all portions of the LGBTQ+ community of San Francisco and the world.

"I support the expansion of bar licenses in the Castro neighborhood," Lemberg stated. "Although the Castro's current nightlife establishments are fantastic, the restrictions on new bars and nightclubs is stifling the creativity of many potential new business owners and I would love to see what impact a new group of bars and nightclubs would have on the neighborhood."

Stephen Torres, a gay man who is the secretary of the advisory board of the Castro LGBTQ Cultural District, stated, "The Castro LGBTQ Cultural District's executive and land use committees have been updated on the supervisor's proposal and actively support any legislation that brings greater inclusivity, equity, and diversity to the district's nightlife.

"We have been assured that protocols requiring community thresholds and input will remain in place and look forward to what LGBTQ focused projects and dialogue this legislation might bring," Torres continued.

Castro Merchants President Masood Samereie, speaking on behalf of the organization's board, stated to the B.A.R. that the board is "strongly in favor of Supervisor Mandelman's legislation," saying it's necessary for the Castro's "evolution."

"The current zoning restrictions have effectively locked out women, people of color, and trans individuals from opening these types of businesses in the neighborhood, and it isn't a stretch to believe that the zoning laws have also limited the variety of businesses available to those who visit the Castro or who have chosen to make this iconic neighborhood their home," Samereie stated. "We should do everything in our power to support the diverse group of hardworking, entrepreneurial individuals looking to move into boarded-up storefronts and provide services to the vast rainbow of folks in the Castro. Supervisor Mandelman's legislation is fundamentally good and essential for the Castro's continued growth and evolution."

Bars aren't the only type of business facing zoning issues. Nine months after San Francisco officials cleared the way for gay bathhouses to resume operations in the city, proprietors reportedly wanted to open such a business near the leather-themed Eagle Plaza parklet in the South of Market neighborhood, but could not because so-called adult businesses are not permitted there. Mandelman's office is still seeking community feedback before moving forward with legislation on that.

Updated, 10/19/21: This article has been updated to accurately reflect the identity of Alex Lemberg, president of the Eureka Valley Neighborhood Association and include a comment from the Castro Merchants.