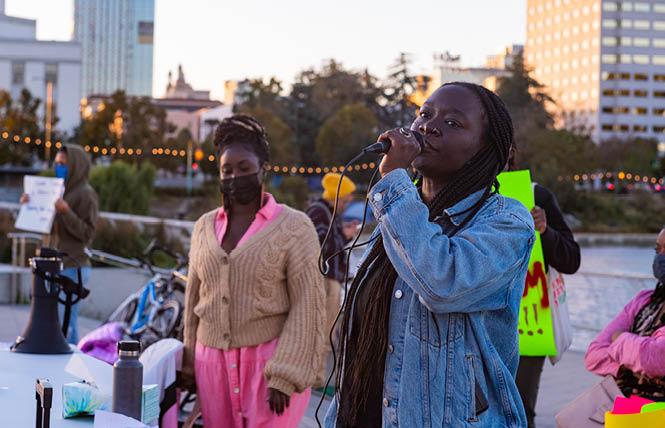 LGBTQ demonstrators of African and Caribbean descent marked Indigenous Peoples' Day and National Coming Out Day at a rally in Oakland to bring attention to Ghana's proposed draconian anti-LGBTQ bill.

More than 20 protesters chanted "kill the bill," "defend our rights," and "stand up and fight back!" while holding signs and handing out flyers to passersby to raise awareness about Ghana's Promotion of Proper Human Sexual Rights and Ghanaian Family Values bill at Oakland's Lake Merritt Amphitheater October 11.

The demonstration was a solidarity protest — one was also held earlier in New York City — put together by some of the growing number of people speaking out around the world against Ghana's proposed anti-gay legislation.

The new 36-page bill seeks to further criminalize same-sex relationships and gender identity in the country. It also targets anyone related to or harboring a known gay or transgender person. Under the proposal, people convicted face institutionalized conversion therapy or up to 10 years in prison, among some of the penalties.

Graeme Reid, Human Rights Watch's LGBT Rights Program director, called the bill "a case study in extreme cruelty," stating in an op-ed in the Daily Maverick in South Africa that the bill took all the bad parts from anti-gay laws in Russia, Nigeria, Uganda, and Hungary that discriminate against LGBTQs and added to them.

United Nations experts assigned by the Human Rights Council warned [LINK: ] if the bill becomes law it would "violate a number of human rights standards, including the absolute prohibition of torture."

Currently, same-sex relationships are illegal in Ghana under Section 104(1)(b) of its Criminal Offenses Act. The law is a relic of the British colonial era, officially codified by Ghana in 1960, three years after the country became independent. Similar laws can also be found across Africa, Asia, and the Caribbean. Men found guilty of violating the Ghanaian law face up to three years in prison for consensual sex, and up to 25 years for non-consensual sex. Until recently, the law was rarely enforced, according to LGBTQ Ghanaian activists.

Queer women are not included under the law, but nonetheless are harassed and are violently attacked, and subjected to so-called corrective rape, according to reports.

Oakland rally
At the Oakland rally, Akua Gyamerah, a 35-year-old queer Ghanaian American woman, spoke about life for LGBTQ Ghanaians, the events leading up to the proposed bill, and how some queer Ghanaians are losing hope. Some passersby stopped and listened.

Gyamerah, a public health researcher at UCSF specializing in Ghana and HIV/AIDS and Black LGBTQ migrants, choked up as tears streamed down her face while reading statements from queer Ghanaians and their supporters.

"I am broken-hearted and filled with shame by my country Ghana," she read from a statement from Suhaidatu Dramani, a queer activist with LGBT+ Rights Ghana. "The anti-LGBT bill and the reaction from the government and other opinion leaders filled me with dread, but it will be passed into law."

"I tried to do my best not to lose heart, but when you have your family and community turn against you and those who you grow up with spit in your face you can't help but think if you were living a lie all along," Gyamerah continued reading, quoting Dramani. "I look for hope, but hope is fleeting. I long for faith, but I have lost my religion. In my heart, I feel alone in this struggle. I look up at all who oppose my existence and I cower here."

Dramani asked for strength to be sent to her, as Gyamerah read from her letter: "I ask that you stand for me now when I cannot do that safely. I ask you to show me how to be brave in this moment when my very humanity is being contested."

The crowd chanted, "We love you. We, we love you."

Gyamerah told the audience that within the past 10 to 15 years, "Ghana's LGBTQI community has been subjected to moral panic and related violence as it gained more visibility and organized for rights and inclusion."

As the Bay Area Reporter previously reported, at the beginning of the year, police raided LGBT+ Rights Ghana's newly opened office in Accra, the capital. In May, authorities raided a human rights training for paralegals working with LGBTQ Ghanaians. The 21 activists at the training were acquitted and released in August.

"What we are seeing in Ghana is an escalation of this backlash and one that we must speak out against, organize against, boycott the country, if need be, and do all that we can to ensure that it does not worsen," Gyamerah said.

"Our LGBTQ community must know that they are loved and not alone in this fight," she continued. "We are here today to demand that Ghana's parliament kill the bill."

The bigger picture
Gyamerah was joined by speakers from Oakland-based Transgender Law Center's Black LGBTQ+ Migrant Project, including Rahel Teka, an organizer at the Oakland chapter of the BLMP; Refilwe Gqajela, who is the political organizing director at the Afrikan Black Coalition; and activist Asia Alman, who is the BLMP Bay Area regional lead organizer.

Gqajela is a 24-year-old queer woman of South African descent who is a labor and community organizer. Alman, 25, is a queer nonbinary femme Black woman who is of Trinidadian and Tobagonian descent. She is also an organizing fellow at Defund OPD Anti-Police Terror Project.

"This bill is a part of a larger colonial project to criminalize Africans in Africa," Teka, an activist of Ethiopian descent, told the crowd. "This is not the first bill on the continent that seeks to criminalize queerness and transness, nor will it be the last if we do not take a stand right now."

Gyamerah and Teka noted the proposed bill is the result of years of work by American evangelical groups in Africa.

Gyamerah called out the World Congress of Families, a registered hate group with the Southern Poverty Law Center, for being the instigators in Russia, other African countries, and now in Ghana's anti-gay law. In 2019, WCF hosted a conference in Ghana.

She pointed to Russia's 2013 Anti-Homosexuality Propaganda Act, Nigeria's Same-Sex Marriage (Prohibition) Bill (2014), and Uganda's 2014 Anti-Homosexual Act , which was struck down on a technicality that same year, and the Sexual Offenses Act, 2021 as examples of WCF and anti-gay religious conservatives' work in Africa.

Gyamerah called the proposed bill a "product of the polarization that is a reflection of a wider pattern across the content."

"Their plan is for the continent and other global south countries, black and brown countries, to pass more bills like this," she said. "We will not allow that to happen."

A WCF representative did not immediately respond to a request for comment.

Call to action
"Alone we can fight one battle at a time, but together we can see the larger project and we can fight back," said Teka. "We are going to kill the bill."

The demonstrators urged people to sign two petitions, one to Ghana's President Nana Akufo-Addo to veto the bill if it is passed by parliament, and the other to Ghana's Ambassador to the United States H.E. Hajia Alima Mahama.

"We envision a world without forced migration where all Black LGBTQIA people are free and liberated, where no one has to leave their homes simply because of who they are, and where we all have the ability to find peace where we stand," Teka said.

"We must step up with our words, our wallets, and our will to help our LGBTQ community," Gyamerah said. "Our LGBTQ community must know that they are loved and not alone in this fight. I hope today that more of us will renew our will to fight for human dignity, love radically, and without limit or judgment."

In addition to BLMP and the ABC, the protest was also sponsored by Silent Majority, Ghana [LINK: https://www.silentmajorityghana.com/].

Out in the World: Israel's LGBTQ community reeling from two hard-hitting events
Sign up!