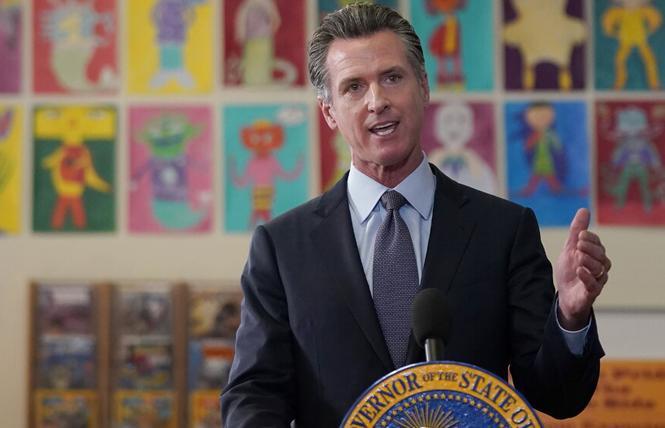 Governor Gavin Newsom signed a bill that will bring benefits to transgender public college students in California, while a second piece of legislation that would benefit sex workers has been delayed until January.

As the Bay Area Reporter reported online October 6, Newsom signed Assembly Bill 245, which prohibits public universities from deadnaming trans and nonbinary students — that is using their former names they were given based on the sex they were assigned at birth — on their diplomas and academic records. Newsom's action is in marked contrast to what has occurred in numerous statehouses across the country this legislative session, where lawmakers have adopted legislation targeting their state's transgender community, particularly trans youth.

'Walking while trans' bill delayed
As Newsom issued his final bill signings October 9, Senate Bill 357, the Safer Streets for All Act, was missing from the list. Co-authored by gay state Senator Scott Wiener (D-San Francisco) and Assemblyman Ash Kalra (D-San Jose), it would repeal California Penal Code Section 653.22, the law that criminalizes loitering for the intent to engage in sex work. It also allows those convicted of loitering with the intent to commit prostitution, particularly the Black women and transgender individuals often targeted under the law, to seal their records.

In a text message late Saturday, Wiener stated that he held the bill, sometimes referred to as "walking while trans," until next year.

"We will send it to the governor in January," he wrote. "It doesn't need any more votes in the Legislature."

A statement from Wiener's spokeswoman, Catie Stewart, tweeted by the Sacramento Bee's Capitol Alert September 10 noted that the temporary delay will give the lawmaker "more time to make the case about why this civil rights bill is good policy that should be signed into law and why this discriminatory loitering crime goes against California values and needs to be repealed."

"Arresting people because they 'look like' sex workers is discriminatory and wrong, and it endangers sex workers and trans people of color," stated Wiener in September after the bill cleared the Legislature. "Anti-LGBTQ and racist loitering laws need to go. Sex workers, LGBTQ people, and people of color deserve to be safe on our streets."

New York state repealed its loitering law in February. Pushing for the Golden State to follow suit was a broad coalition made up of former and current sex workers; LGBTQ+ groups like Equality California and Transgender Gender-variant and Intersex Justice Project; the American Civil Liberties Union; and the Coalition to Abolish Slavery and Trafficking, known as CAST LA.

"By ending one form of criminalization, the state takes a monumental step forward in protecting our safety and our livelihoods," the DecrimSexWorkCA coalition stated last month in urging Newsom to sign SB 357.

Earlier this summer Newsom signed into law several other bills related to gender identity issues. AB 439 by Assemblywoman Rebecca Bauer-Kahan (D-Orinda) allows for deceased Californians who are nonbinary to be identified as such on their death certificates.

The governor also signed into law two bills, one by Bauer-Kahan and another by gay state Senator John Laird (D-Santa Cruz), that replaces "archaic gender-specific pronouns" used to refer to the state's various elected leaders and appointed officials in state codes with gender neutral terms. Currently, most parts of the state code use "he" or "him" pronouns.