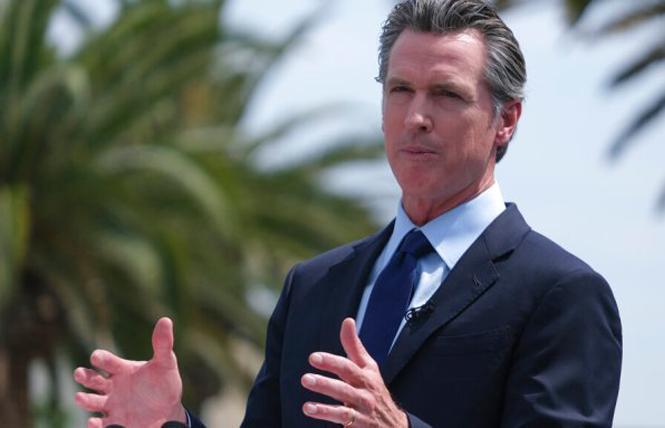 Governor Gavin Newsom vetoed a law that would have allowed for contingency management, including cash benefits, as a way to treat substance use disorder. Photo: Courtesy AP

Substance use treatment advocates expressed their displeasure with Governor Gavin Newsom over the weekend after he vetoed Senate Bill 110, gay state Senator Scott Wiener's legislation that would have expressly legalized contingency management as a way to treat substance use disorder and authorizes Medi-Cal to cover it.

Contingency management - which offers incentives, including financial inducements, for staying sober - is already used by the Veterans Affairs Administration and the San Francisco AIDS Foundation, and shown to be an effective way to help people overcome addiction to stimulant drugs like methamphetamine, according to Wiener, a San Francisco Democrat.

In a message late October 8, the governor wrote that the bill was "premature."

"Given the promise of contingency management as a treatment for stimulant use disorders, the 2021-22 budget includes funding to support a pilot contingency management Medi-Cal benefit from January 2022 through March 2024," Newsom wrote. "The Department of Health Care Services has sought federal approval for this pilot project and will work expeditiously to implement it once it is authorized. The outcomes and lessons learned from the pilot project should be evaluated before permanently extending the Medi-Cal benefit. As such, this bill is premature, and I am returning it without my signature."

Wiener stated he is "deeply disappointed" by the veto.

As the Bay Area Reporter previously reported, San Francisco officials urged Newsom to sign the legislation last month. San Francisco made international headlines for having more drug overdose deaths (657) than COVID-19 deaths (257) in 2020, and local officials wanted to make the case at a Castro neighborhood news conference that the City by the Bay is still a compassionate one.

"We can't make it disappear because we don't want to see it," Mayor London Breed said at the time. "These are people. These are friends and family."

As a matter of fact, the City and County of San Francisco was one of the lead sponsors of the bill. Breed did not respond to a request for comment regarding the veto.

Officials also used the occasion of that news conference to promote SOMA RISE, a sobering center for all drugs (not just methamphetamine), which is going to open later this fall south of Market at 1076 Howard Street. It has a 20-bed capacity and will be operated by HealthRIGHT 360, which was awarded the contract to run the center.

Vitka Eisen, a lesbian who is the CEO of HealthRIGHT 360, said that while contingency management might seem odd at first glance, "I am grateful to live in a city and county that believes in science."

SB 110 was also sponsored by the AIDS foundation, APLA Health, Equality California, and the California Association of Alcohol and Drug Program Executives.

"The meth crisis is devastating the LGBTQ+ community, and every day that we fail to act means more lives lost to this urgent, preventable epidemic," stated Tony Hoang, a gay man who's EQCA executive director-designate. "We are deeply disappointed by today's veto, but we are committed to expanding access to this important program. We look forward to working with Senator Wiener to do so."

Gary McCoy, a gay man who is the director of policy and public affairs at HealthRIGHT 360, made headlines a couple of months ago when he held a hunger strike in front of City Hall demanding action from the city on the drug overdose crisis.

McCoy wrote via Twitter that he was "livid" at the veto.

Rafael Mandelman, a gay man who represents District 8 (including the Castro) on the San Francisco Board of Supervisors, wrote via Facebook that "this is a setback for people suffering from methamphetamine addiction" and that "I will continue to push to expand contingency management."