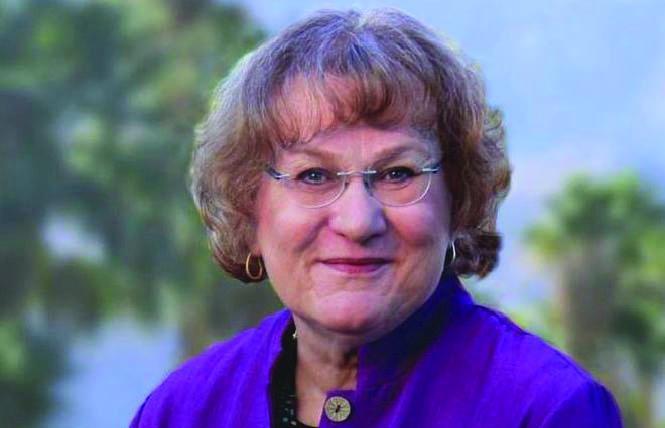 Last year, Palm Springs Mayor Pro Tem Lisa Middleton, the first transgender person in California elected to a non-judicial position, opted to sit out the special election for the open 28th Senate District seat and instead run for reelection to her city council seat in the LGBTQ tourist and retirement mecca.

Now, with Melendez barred from seeking a full four-year Senate term due to the state's term limits and exploring a run for lieutenant governor in 2022, Middleton is jumping into next year's open race for the legislative seat. She made her candidacy official Monday, October 4, announcing endorsements already from the Legislative LGBTQ Caucus and former United States Senator Barbara Boxer (D-CA).

"I'm thrilled today to be announcing my campaign for state Senate District 28. I'm running to make a difference in Sacramento and be an effective voice for the 28th District by bringing pragmatic, practical solutions that will improve the lives of all Californians," stated Middleton, 69, who lives with her wife, Cheryl O'Callaghan, and is now a grandmother to a newly born grandson.

The couple moved to Palm Springs in 2011, and Middleton had served on the city's planning commission. Her election to a citywide council seat in 2017 was part of a wave of historic victories for transgender candidates across the country that November.

Middleton easily won reelection last November to a four-year term in the newly created District 5 city council seat. Her Senate campaign announcement noted that the majority of Riverside County voters in the 28th Senate District backed Joe Biden for president last fall and that the district now has a two-point Democratic registration advantage.

"Throughout my career, I have been a leader who listens, unifies and gets things done for the people I represent," stated Middleton. "It is time that Riverside County and the 28th District receive our fair share of California's budget. Our region is one of the fastest growing regions of the country. To win the 21st century, we need a local and regional infrastructure built for the 21st century. We cannot wait to address climate change. It is past time we ensure opportunity for all does in fact include everyone."

In offering her "enthusiastic endorsement" of Middleton, Boxer called her "a fearless fighter for the people she represents" and someone who "is a compassionate, principled and savvy leader who will fight for those most in need in Sacramento while bringing people and ideas to the table to solve big problems. California needs Lisa's forward-thinking ideas, compassion, grit and determination in the State Senate."

In a joint statement the current eight members of the affinity group for LGBTQ legislators noted, "it's far past time that transgender Californians were represented in Sacramento. We know that Lisa will be a pioneering, relentless advocate for the 28th District and all Californians, working tirelessly to make the state more inclusive, fair, and just. We're with her 100% and look forward to helping Lisa get elected."

She moved to San Francisco in 1994 when she was working for California's State Compensation Insurance Fund. It was at that time that she transitioned from male to female.

Yet she didn't slow down in retirement, chairing the Organized Neighborhoods of Palm Springs and serving on the Desert Horticulture Society's board of directors in addition to her LGBT advocacy and city planning work. As a city council member, Middleton addresses regional transit issues as a member of the Riverside County Transportation Commission and the Sunline Transit Board of Directors.

She is also a member of the League of California Cities Board of Directors, chairing its Cal Cities Revenue & Taxation Policy Committee, and sits on the California State Department of Transportation Zero Traffic Fatalities Task Force. In April 2019, Governor Gavin Newsom appointed her to the Board of Administrators of the California Public Employees Retirement System, where she chairs the Risk & Audit Committee and is vice-chair of the Governance Committee.

"In the State Senate, I will work to return our state and country back to a place where a crisis—whether it be a pandemic, wildfire, or earthquake— is not an opportunity for partisanship but for us to work together to save lives. In our state, it is always going to be not if, but when and how bad is the next emergency," stated Middleton. "My foundation is the neighborhoods I represent. My path to being the first transgender Californian to be elected to a political office began by standing up for Palm Springs neighborhoods and street repair funding. I will go to work every day in the State Senate to improve the quality of your life, in your neighborhood."

For more information about her Senate campaign, visit https://www.electlisamiddleton.com/