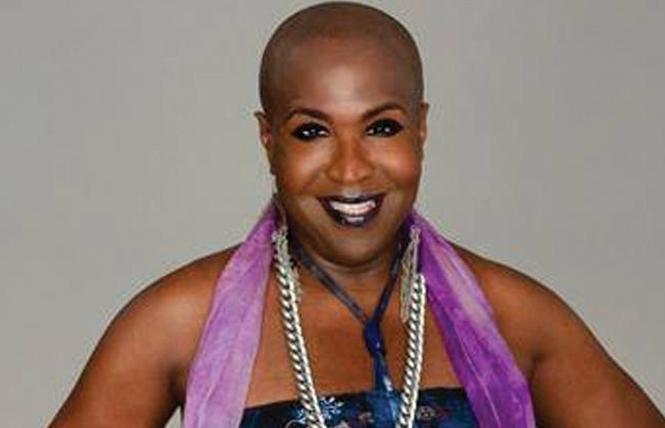 Toni Newman is set to depart this fall as the interim executive director of LYRIC.

Nearly a year after being named the interim leader of a San Francisco LGBTQ youth agency, Toni Newman will be departing to help run a beleaguered Black AIDS nonprofit on a limited basis. It will be the third prominent LGBTQ organization based in California that Newman has led in the last two years.

Last October, the Lavender Youth Recreation and Information Center in San Francisco's LGBTQ Castro district brought on Newman in an interim capacity following the departure of its longtime executive director. Jodi Schwartz, a queer woman, had led LYRIC for 15 years and transitioned into overseeing its capital campaign for planned renovations of its building.

It was a return to Northern California for Newman, a Black trans woman who had served as executive director at St. James Infirmary, which focuses on offering health care and social services to current and former sex workers and others, from May 2018 to February 2020. She had abruptly resigned that winter due to deciding to relocate to Los Angeles, as she explained to the Bay Area Reporter at the time.

But she never fully left Los Angeles, where she is a distinguished faculty member at the Transgender Strategy Center, advising non-profit organizations on engagement with transgender and nonconforming communities. Newman also chairs the board for TransCanWork, which is also based in Los Angeles.

Come November she will serve as the interim CEO of the Black AIDS Institute, which is based in Los Angeles and was founded in 1999 to bring HIV prevention and education to the city's African American community. It has grown into a nationally recognized Black-led health services provider and leading advocate on HIV and AIDS policy and programs.

But it had been buffeted by controversy since it let go its previous CEO Raniyah Copeland in late August. Her abrupt departure led critics of the move to demand BAI's board resign and see Copeland be reinstated. As POZ magazine reported at the time, Copeland in January had raised allegations of bullying, harassment and creating a hostile work environment against her supervisor, BAI's Board Chair Grazell R. Howard, leading to months of internal strife at the agency.

In announcing the news about Copeland, Howard wrote that the BAI board had first "contemplated" in January a need for new leadership and thanked her "for her service to BAI during a critical time in our organization's history, and especially during an unprecedented and challenging time in our country. We wish her the best in her future endeavors."

A photo of Copeland with BAI co-founder Phil Wilson, however, remains on its website today and Howard is still listed as board chair. In a statement released Thursday, September 23, announcing its latest leadership transition, no one from the Black AIDS Institute's board or staff was quoted by name.

Newman, in a Facebook post Friday, wrote she is "so excited to be appointed the Interim CEO of the @blackaids beginning in November 2021. The Managing Director will be Dr. Kemal Atkins. We will be announcing the new President of @lyricsf very shortly."

The release from BAI noted that Dr. Atkins would also be serving as a consultant on a temporary basis. The institute added that it had hired Pat Bass and Chris Bates, global experts on HIV/AIDS prevention, education, and treatment programs, to assess the agency's current capabilities and mission.

Bass helped draft the federal Ryan White CARES Act, which funds programs for people living with HIV/AIDS across the country. Bates served as the executive director on the Presidential Advisory Council on AIDS and director of the Office of AIDS Policy in the Obama administration.

"The work of BAI is as important today as it ever has been, and we're so proud of our incredibly talented and dedicated team that understands what is at stake for the Black community impacted by HIV and committed to ending this epidemic," stated the agency in its press release.

Rui Bing, LYRIC's interim fund development and communications director, told the B.A.R. the agency expects to announce its new executive director in the next two weeks. The person will help oversee extensive renovations to the agency's queer youth center at 127 Collingwood Street in the Castro neighborhood.

The plans, approved last fall, call for enclosing a portion of the purple-painted building's driveway by pushing out the ground floor facade to bring it flush with the rest of the building. In front would be a courtyard area, while the interior will be remodeled and an exterior outdoor area between the main building and a rear-yard structure will also receive a refresh.

According to the agency it has now raised 80% of its $2.5 million "Flourish with LYRIC" fundraising campaign to cover the cost of the renovation. Initially scheduled to be completed this summer, the project will now see a groundbreaking in 2022.

Bing told the B.A.R. "construction should start in the new year. There have been some delays due to permitting and COVID, but we aim to break ground early next year."

In a recent note about her time leading LYRIC, Newman noted the agency's leadership had ratified a union contract with the Office and Professional Employees International Union Local 29 for its frontline staff and that it had resumed full-time to in-person services at its "Purple House." The building is now open from 10 a.m. to 6 p.m. Monday through Friday for youth 24 years of age and under to drop by to access information on programming and services.

They can also pick up food bags, hygiene kits, safer sex supplies and connect with staff. Those youth receiving case management with one of LYRIC's youth advocates, however, can only meet there in person by appointment at this time.

"Our organization has survived and adapted in the pandemic," wrote Newman. "We are emerging as a worker-driven organization with a strong leadership team, with countless lessons learned and best practices from a year of implementing programs remotely in service of LGBTQQ+ youth."