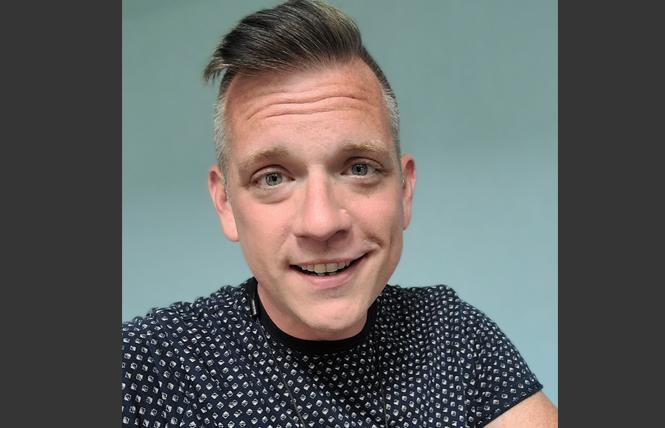 Out in the Bay proudly features a new queer podcast this week: "Stereotypes — Straight Talk from Queer Voices," produced and hosted by KALW and KQED colleague Christopher Beale, a former commercial radio personality.

On the pilot episode, "Still Coming Out," Beale treats us to two beautifully told coming out stories. One is from Beale himself, who shot out of the closet quite suddenly at age 15; the other is from Rae Strozzo, originally from Georgia, who over many years traveled through butch lesbian to trans man to nonbinary.

"My mom would be super-confused if she knew I wore skirts now," Strozzo said, laughing in the podcast, played almost in its entirety on this week's Out in the Bay. "As if I haven't confused her enough already."

For Strozzo, who with mixed feelings participated in their high school female crush's wedding, coming out to themself as lesbian at 19 was difficult. Strozzo tried "the church thing. ... waiting on Jesus to fix things." Surprise, surprise, that didn't work.

In mid-1990s Georgia "there was this ilk of dykes," says Strozzo who "wore jeans and work boots, flannel shirts and chain wallets. That was me." But she didn't fit in. "I realized that lesbians don't really want to be guys. That was a big clue!" Strozzo said with another laugh.

So Strozzo told their therapist they were trans, and in the same week, told their mom they were a lesbian. Strozzo said mom took the news "in stride," but later "all hell breaks loose."

After moving to Tucson and transitioning in 2005, Strozzo came out to their parents again. They've only seen their parents twice since then, but Strozzo said "there is love there."

Beale's story? "You might say I had my first boyfriend at age 12. He was my best friend, we were inseparable. We were also lovers, in the most innocent sense of the word." But "through time and custody," they grew apart.

"By 15 years old, I knew who I was, I just hadn't told my parents yet. One hot afternoon, I would make a series of decisions that would force me out of the closet." The story he tells on the podcast, of a shirtless older boy playing basketball across the street when young Chris was home alone, may be hotter than that Florida day.

Beale told Out in the Bay that after 20 years in commercial radio, "talking up Journey records" stopped satisfying him. "I wanted to do more for my community and to challenge myself."

So he moved from Sacramento to San Francisco and threw himself into public radio journalism and audio storytelling. On Stereotypes, Beale vows to "point my microphone at you — the vibrant and inspiring queer community that I'm so proud to be part of."

Eric Jansen is founding host of Out in the Bay — Queer Radio from San Francisco and an on-call announcer for KQED. Learn more and listen at https://www.outinthebay.org/