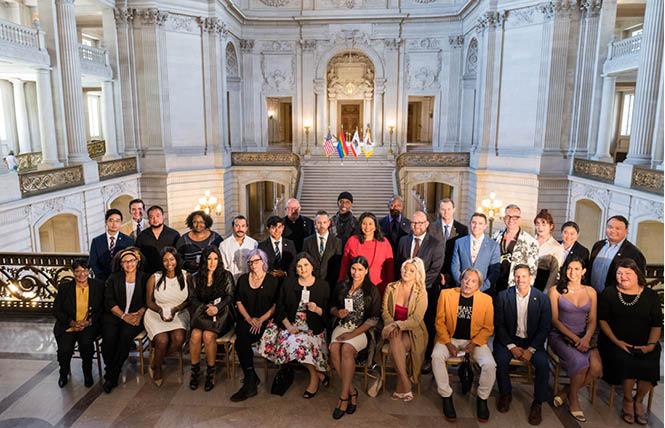 How the city can track the number of LGBTQ people it is employing was a main focus for the reconstituted LGBTQI+ Advisory Committee for the San Francisco Human Rights Commission as its first meeting. The consultative panel lent its support for doing so ahead of the issue coming before the Board of Supervisors in the coming weeks.

As the Bay Area Reporter first reported in June, city leaders want to be able to ask employees and those who apply for jobs with the city in a voluntary and anonymous way if they identify as part of the LGBTQ community. In order to do so, however, a restriction in the city's municipal code that forbids it from inquiring into the "sexual orientation, practices, or habits" of city employees must be removed.

Those fears led to city leaders wanting to strengthen protections for LGBTQ people seeking employment with City Hall or various city departments and their drafting of Chapter 12E. With AIDS no longer a death sentence and HIV now a largely manageable disease, Mayor London Breed and gay District 8 Supervisor Rafael Mandelman introduced legislation during Pride Month that would repeal the anachronistic section of the Administrative Code.

The Department of Human Resources, now led by out director Carol Isen, would then be allowed to collect voluntary and anonymous sexual orientation demographic data from city employees and applicants. Victor Ruiz-Cornejo, a gay man who advises Breed on LGBTQ policy issues, provided the LGBTQI+ advisory committee an update on the issue at its September 20 meeting.

Without such data there is no way to be sure that LGBTQ people are applying for city jobs, noted Ruiz-Cornejo.

"What that tells us is maybe we need to do a better job marketing our jobs to our community and ensuring people hear about opportunities in city government," he said. "We know often these are good paying jobs we want our community to have access to."

HRC Vice Chair Joseph Sweiss, a queer man who worked on revising its LGBTQ advisory panel and helped to chair its inaugural meeting, noted this will be "an extremely important change in the way the city will collect city employee data."

Joe Adkins, a gay man who is a former administrative aide for Mandelman and represents him on the LGBTQ advisory panel, noted how times have changed since the 1980s when the initial code was enacted.

"Disclosing this data is only serving our community and ourselves by ensuring our needs are heard and we have a seat at the table," said Adkins, now employed in the office of the clerk for the supervisors.

Hilary Burdge, who is queer and vice president of program, strategy, and impact at Boys & Girls Clubs of San Francisco, stressed the need for an update in the future on how the SOGI employee data collection was going to ensure it is working.

Transgender Lebanese refugee Sophia Kass, program manager of the LGBTQ+ Aging and Abilities Support Network at the Shanti Project, also noted the importance of making sure accurate questions about a person's gender identity are included on the forms so that such data is correct and useful.

"I know a lot will depend on what kinds of questions we are asking," said Kass.

In response to questions about how the SOGI questions would be worded, Ruiz-Cornejo noted the legislation is purposefully vague on the issue so that the human resources department can easily update the wording of the questions as needed. It will be instructed to work with other city bodies, such as the LGBTQI+ advisory committee and the Mayor's Office of Transgender Initiatives, on the exact wording of the questions that get asked.

The LGBTQI+ advisory committee voted 23-0 to endorse seeing Chapter 12E be struck from the city's Administrative Code. The supervisors' Rules Committee will hold a hearing on the issue Monday, September 27, with the full board expected to then take it up in early October.

First meeting
Monday's virtual meeting was the first for the LGBTQI+ advisory committee since Breed swore in its 26 members in June. Its seats are divided between community members, representatives from elected officials, and staff or leaders from city-based LGBTQ nonprofits and social service agencies.

The COVID pandemic delayed the process to recruit members for the revamped advisory committee, pushing back its relaunch until this summer. HRC Executive Director Sheryl Davis virtually greeted the members Monday and detailed some issues they could work collaboratively on, from ensuring LGBTQ youth are respected and treated fairly in local schools to ensuring city funds are being prioritized for programs that address the needs of the LGBTQ community as departments are preparing their annual budget priorities.

"So we are not waiting until the budget is set and asking for addback dollars," said Davis, who told the committee members she was "super excited to be in space with you all today."

Updated, 9/21/21: This article has been updated to include the current job for advisory council member Joe Adkins.