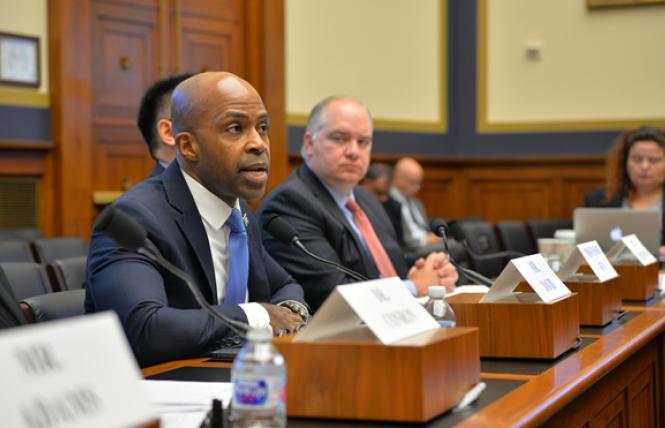 Human Rights Campaign President Alphonso David has been terminated as head of the nation's leading LGBTQ group following a public dispute with the board over his role in the Andrew Cuomo scandal.

Jodie Patterson and Morgan Cox, co-chairs of the Human Rights Campaign board, issued a statement late September 6 explaining the decision that David, a gay man and the first Black president of the LGBTQ group, was being terminated under the "for cause" provision of his contract.

"At HRC, we are fighting to bring full equality and liberation to LGBTQ+ people everywhere. That includes fighting on behalf of all victims of sexual harassment and assault," Patterson and Cox wrote. "As outlined in the New York Attorney General report, Mr. David engaged in a number of activities in December 2020, while HRC president, to assist Gov. Cuomo's team in responding to allegations by Ms. Boylan of sexual harassment. This conduct in assisting Governor Cuomo's team, while president of HRC, was in violation of HRC's conflict of interest policy and the mission of HRC." The statement was referring to Lindsey Boylan, a former senior staffer for Cuomo, who was among the first to accuse him of sexual misconduct in the workplace last year.

According to the statement, the boards for the Human Rights Campaign and Human Rights Campaign Foundation voted to terminate David. The board named Joni Madison, the current chief operating officer of HRC, as interim president effective immediately as board members engage in a search to replace David as president.

The decision to fire David comes after public sniping between him and the board co-chairs on the independent review HRC initiated after he was named nearly a dozen times in the report issued by New York Attorney General Letitia James.

According to a report in the New York Times, a person familiar with the deliberations among the HRC board said that David "never told the organization that he was helping to advise Mr. Cuomo when the accusations came to light." Further, David didn't consult the LGBTQ group's counsel, or inform them he was going to be interviewed by James' office, the Times reported.

The ignominious outcome of David's tenure at HRC comes after two years with him at the helm of the organization. Observers had high hopes for him as the first person of color to run the nation's leading LGBTQ group, which he took into new directions with a foray into legal work on LGBTQ rights.

David, via Twitter, where his profile as of Tuesday morning still identifies him as HRC president, vowed to fight the decision to terminate him in court.

"As a Black, gay man who has spent his whole life fighting for civil and human rights, they cannot shut me up," David wrote. "Expect a legal challenge."

The board identified as reasons for termination David's inability to serve as the public face of HRC as well as "material damage" David has caused to HRC as evidenced by media coverage and "hundreds of calls, emails and other negative communications HRC has received from staff, members of the Board of Governors, volunteers, program partners, general members, supporters, corporate partners, political figures, and more expressing serious concern with Mr. David's conduct and its inconsistency with the values and mission of HRC."

"This is a painful moment in our movement," Patterson and Cox stated. "While the board's decision is not the outcome we had ever envisioned or hoped for in terms of Mr. David's tenure with HRC, his actions have put us in an untenable position by violating HRC's core values, policies, and mission."

Over the weekend, David tweeted in a statement the board came to him late September 3 telling him the review is completed, but suggested he resign even though it could produce no evidence of wrongdoing.

"I have the support of too many of our employees, board members, and stakeholders to walk away quietly into the night," David wrote. "I am not resigning."

The next day, the board sent the email to its fellow members, saying it was "surprised and disappointed by the inaccuracies in his portrayal of events." The email was shared with the Blade and three sources confirmed its accuracy.

Among the "mischaracterizations" identified by the board was David's "assertion that there was 'no indication of wrongdoing on his part.'"

David has said from the beginning he has committed no wrongdoing and wouldn't resign as HRC president, even though other activists caught up in the scandal — Tina Tchen, president of Time's Up, and Roberta Kaplan, board member of the same organization — made the decision to step down.

After the HRC board email became public September 6, David issued a subsequent statement on Twitter: "The facts are that I was contacted by the board co-chairs late Friday night," David wrote. "They told me that the Sidley Austin review was complete, but they would not provide the report to me or anyone. They gave me a deadline of 8 a.m. the next morning to tell them whether I would resign. They didn't offer a shred of evidence of any wrongdoing on my part when I asked repeatedly."

Board support eroded
At the time news of the New York attorney general's report emerged, the board initially supported David, and renewed his contract for five years. The next week, however, the HRC board and David announced they had agreed to an independent review on his involvement in the Cuomo scandal that would be conducted by Sidley Austin LLP and last no longer than 30 days.

Sidley didn't respond to multiple requests from the Washington Blade to comment over the weekend on the review. The board chairs have indicated the results of the review would be confidential.

According to the New York Times, the person familiar with the review said there was no written report and there was never going to be one. Instead, there were oral presentations to the board. David is said to have given names to the board of people who would speak on his behalf during the investigation, in addition to the 10 hours he spent being interviewed, the Times reported.

Some legal experts had doubted the validity of a review by Sidley Austin on the basis it was among the legal firms agreeing in 2019 to help with HRC entering into litigation to advance LGBTQ rights, an agreement David spearheaded upon taking the helm of the organization.

James' report on Cuomo names David nearly a dozen times. Among other things, the report indicated after his tenure as counselor to Cuomo, he kept the personnel file of an employee accusing the governor of sexual misconduct, then assisted in returning that file to Cuomo staffers seeking to leak it to the media in an attempt to discredit her.

(A representative has disputed the characterization of materials David kept as a personnel file, saying it was memorandum on an internal employment matter David kept because he, in part, worked on it. David has said he was legally required to return the material.)

Further, the AG's report finds David allegedly said he would help find individuals to sign their names to a draft op-ed that sought to discredit the survivor that went unpublished, although he wouldn't sign the document himself. Also, the report indicates David was involved in the discussions about secretly calling and recording a call between a former staffer and another survivor in a separate effort to smear her.

In response, David said he agreed to help with only one version of the letter that was more positive in nature and his part in the discussion about recording a survivor was limited to his role as counselor.

The nation's leading LGBTQ group is now faced with the task of finding a new president at a time of significant challenges for the movement. The Equality Act is all but dead in Congress and numerous states have enacted laws targeting transgender youth, many of which are being challenged by litigation that was filed by HRC.

Editorial: HRC board made the right call
Sign up!