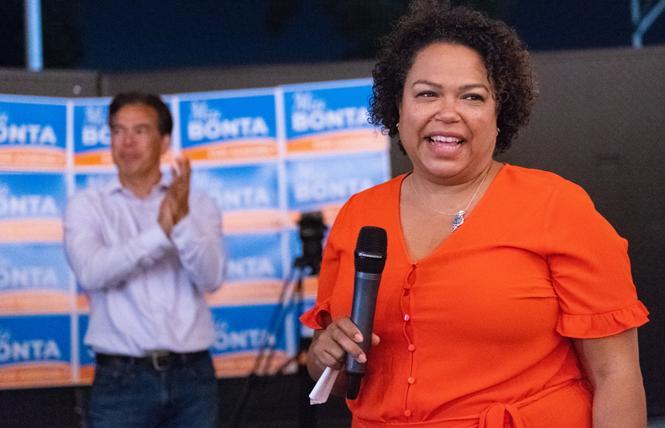 Mia Bonta has won a special election to succeed her husband in the state Assembly. Photo: Jane Philomen Cleland

Mia Bonta will succeed her husband in the state Legislature, becoming the fifth female legislator from the Bay Area. She easily defeated her queer opponent, Janani Ramachandran, in the August 31 runoff race for the East Bay's 18th Assembly District seat.

Mia Bonta, 49, a Black Latina, was seen as the frontrunner in the race, with a bevy of Democratic Party leaders and special interest groups lining up to endorse her and fund her campaign. She easily took first place Tuesday night and saw her lead grow to 56% of the vote after an additional 16,870 ballots were tallied Thursday, September 2.

Bonta declared victory in the race at 5 p.m. Thursday, saying she was "honored and grateful" that voters put their trust in her "to represent our community in Sacramento." She added she is "ready to go to Sacramento and get to work!"

"Rob and I chose to build our life here in the East Bay because we knew this community was special. This is a unique pocket of the world where we celebrate our diversity, where we welcome folks of different backgrounds, where folks are free to speak their mind and stand up against injustice," stated Bonta. "It is that special East Bay spirit that I plan to represent in the Assembly. I am going to Sacramento to build upon that ethos to help our community thrive."

Ramachandran announced Thursday that she plans to wait until all votes are counted before conceding the race.

"While the window for our campaign has certainly narrowed, I am mindful of our commitment as Democrats to make sure every vote counts," she stated. "To live up to that ideal we should count every vote before we make final declarations.

"We need to respect all the young people, people of color, and communities left out of the political process - and their efforts rushing themselves, their neighbors, and family members to the ballot boxes on the final days of the campaign," Ramachandran added. "I am so proud of the grassroots corporate-free campaign we ran and the movement we are building."

Ramachandran was aiming to be the first LGBTQ state legislator from the East Bay and first to identify as queer. The Oakland resident of South Indian ancestry would also have been the first out API female state legislator and California's first South Asian assemblywoman.

Bonta should be sworn in as soon as possible. She will need to run next year for a full two-year term.

In her victory statement Bonta pledged to "build more affordable housing so folks can afford to live here. We will invest in our public schools so our students and teachers can reach their full potential. We will invest in clean energy and environmental justice initiatives to protect our health and ensure our future."

She also promised to "reform our criminal justice system so that folks are not treated differently based on the color of their skin or the dollar amount in their bank account. Our community is strong, and we have all the leadership and potential to make it stronger and better, and that is what I intend to always strive for in the Assembly."