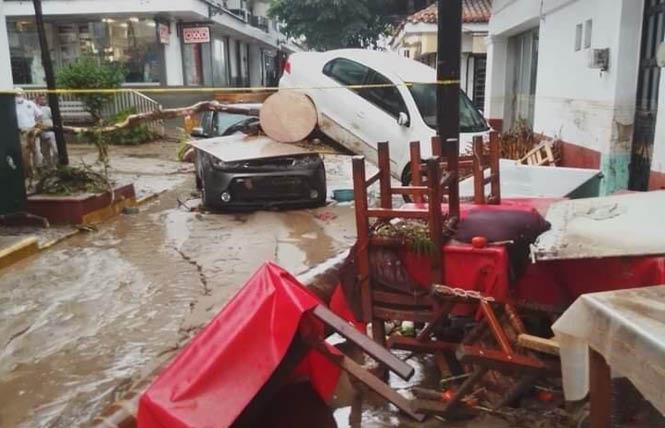 The gay area of the Zona Romantica in Puerto Vallarta is getting back up and operating after Hurricane Nora skirted past the popular coastal resort town late August 28.

The hurricane developed off the coast of Puerto Vallarta, centered about 50 miles north-northwest late Saturday night and caused severe damage, reported the New York Times. The Associated Press reported it made landfall, crossing the cape south of Puerto Vallarta, turning to head north. It brought 75 mph winds extending out 105 miles, and a downpour swelling the rivers, especially the Rio Cuale, during the early hours Sunday morning.

The river overflowed, taking out the Cuale Bridge, one of the main bridges into the Zona Romantica, the popular cobblestoned tourist area. The flood collapsed the two-story Cowork Hotel workspace that also housed the recently opened Bonito Kitchen restaurant on the ground floor along the river's bank.

The space was vacated except for one 13-year-old Mexican youth, whose body was found in the rubble by rescue workers, wrote Paul Crist, owner of Hotel Mercurio.

"The Insurgentes Bridge near Incanto Theater was lost. That will be a big traffic problem in the [El] Centro area," Don Pickens, owner of gay boutique resort Casa Cupula, wrote to the Bay Area Reporter.

The flea market on the Isla Cuale in the middle of the river, along with businesses on the surrounding streets, were flooded by the surge of water and washed into the bay, wrote Crist.

The power was out for nearly 48 hours throughout the area.

"The biggest damage was confined to a few spots in the city, as it did not stop pouring last night," wrote Estrellita "Star" Velasco, the lesbian owner of Vallarta Local, a food and photography tour company, in an email to the B.A.R. "The amount of water was simply too much, rivers grew exponentially."

Velasco explained that the two rivers that cross the city along with rivers to the north and south of Puerto Vallarta overflowed.

"Anything too close or within its pathway was flooded," she wrote. "The corner of a two-story building collapsed as well as some suspension bridges."

Some power was restored by late Sunday afternoon when the B.A.R. interviewed Christian Serrano, founder, co-owner, and director of BearadiseMX (formerly Vallarta Bear Weekend), for a forthcoming travel article.

"Traffic will be snarled for a while during repairs and rebuilding," wrote Pickens.

"Vallarta will bounce back. [The] cleanup has already begun. Airport is open and we have full electric, cellular, and internet service," he added.

Crist's husband, Luis Tello, reactivated the volunteers of his food distribution project that delivered over 13,000 food baskets and tons of hygiene products to local families in need during the COVID-19 pandemic last year, he wrote. The community kitchen is already operating near the Rio Ameca, he added.

Crist launched a GoFundMe campaign, "Supplies for Families in Need Puerto Vallarta," August 29 with 100% of donations [LINK: ] going to the relief effort, he wrote. At press time it had raised nearly $42,000 of its $50,000 goal.

Hurricane Nora was downgraded to a tropical storm by Sunday night as it moved north up the Mexican Pacific coast heading toward the Gulf of California, according to the U.S. National Hurricane Center. It continued to cause damage with flooding, mud slides, and collapsed buildings as it dumped heavy amounts of rain up to 12 inches in some parts of Mexico's west coast.

Updated, 8/30/21: This article has been updated to reflect the youth who died was Mexican.

Cliff at construction site near gay beach in Puerto Vallarta collapses
Sign up!