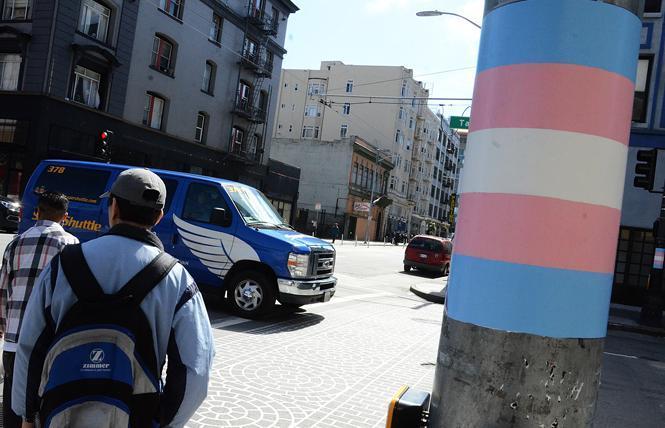 The Transgender District is planning on holding a block party commemorating the 55th anniversary of the Compton's Cafeteria Riot at the intersection of Turk and Taylor streets.

That riot in 1966 was one of the first queer uprisings against police harassment and violence in American history, predating by three years the Stonewall riots in New York City that kickstarted the modern day LGBTQ liberation movement. The 1966 riot took place at what was at the time an all-night diner at the Turk and Taylor intersection frequented by LGBTQs.

"It's been a crazy two years with the pandemic, and the disparities we've seen as Black trans folks and it was important for us to center the 'riot' in a way that also promoted us reclaiming our joy," Sa'id added.


The block party will occur one week after the Castro LGBTQ Cultural District will be providing COVID-19 testing and vaccinations Sunday, August 22, at the intersection of Noe and Market streets as part of the Noe Art Mart, from 11 a.m. to 6 p.m. Through the event the LGBTQ district will also be honoring Marsha P. Johnson, one of the figures from the Stonewall riots.

Breed will declare Transgender History Month on August 24 at City Hall, according to a news release from the Transgender District.

"We are grateful to partner with the Transgender District and Mayor London Breed to declare August as Transgender History Month in San Francisco," stated Clair Farley, a trans woman who is the executive director of the Office of Transgender Initiatives. "San Francisco has long been a leader in fighting for trans rights and making critical investments to support our residents. This historic announcement is an important way to honor those that have paved the way for our movement and address the important work we have ahead to address the ongoing discrimination and violence facing trans and gender nonconforming communities."

Breed's office did not respond to a request for comment.

"Despite the existence of a national LGBT History Month, Transgender Day of Visibility, and Transgender Week of Remembrance, none fully capture the magnitude of how much trans people have contributed to social, political, and cultural progress for many marginalized communities throughout the decades," stated Jupiter Peraza, the Transgender District's director of social justice initiatives. "Transgender History Month is a celebration — a way to rejoice and learn about the sacrifices of our trans ancestors and the lengths of their struggles for past, present, and future generations of San Franciscans."

Nobody knows the exact date when the Compton's Cafeteria riot took place, but what the district is calling the Riot Party will occur August 29, from noon to 4 p.m. The outdoor event is free but proof-of-vaccination or a negative COVID-19 screening within the past 48 hours is requested by the district.

Sa'id told the Bay Area Reporter that district staffers, volunteers, and security — as well as food and beverage vendors — will be required to be masked, but the general public is not so required. There will be capacity limits, however.

Johnson, who died in 2002 at the age of 46, was a trans woman who was a prominent participant in the Stonewall riots who went on to become a beloved vocal advocate for gay and transgender issues until her death. The anniversary of her birthday is August 24.

Tina Valentin Aguirre, a genderqueer person who is the manager of the Castro LGBTQ Cultural District, told the B.A.R. that the organization added COVID testing and vaccines to the day celebrating Johnson in light of the recent citywide surge in cases, which as the B.A.R. reported did not spare the LGBTQ community.

"Originally, we were planning to have an entertainment-focused event to honor Marsha P. Johnson, with a stage, DJs, and drag performers," Aguirre stated. "We pivoted to providing testing and vaccinations for COVID-19 because so many community members were getting exposed to the virus at other in-person events.

"We still honor the legacy of Marsha P. Johnson by acknowledging that there are health disparities impacting LGBTQ people, especially LGBTQ people of color," Aguirre continued. "Though this is not the event that we originally planned, we understand that this is what the community needs right now."

Aguirre stated that "we hope to have a fun street event next year to honor Marsha P. Johnson."

The August 22 event is being put on in collaboration with the San Francisco Department of Public Health, the Castro Merchants Association and Virus Geeks, an organization that provides COVID PCR tests.
Castro Merchants President Masood Samereie told the B.A.R. that the group, in collaboration with the district, are "going to offer testing and vaccination in the Castro weekly on Saturdays at Noe Street going forward."

Updated, 8/17/21: This story has been updated with information about ongoing COVID testing and vaccination in the Castro.