LGBTQ Agenda: For the Pollacks, CBD business is all in the family 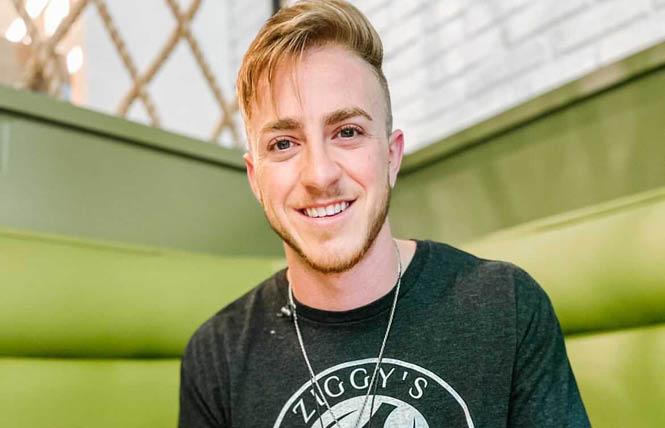 Jordyn Pollack is the co-owner of Ziggy's Naturals, a CBD business that sells topicals, edibles, and other products. Photo: Courtesy Jordyn Pollack

Jordyn Pollack helped alleviate his transition-related anxiety with CBD products, and now selling them has become the family business through Ziggy's Naturals.

"CBD products helped me to relax," said Pollack, a 29-year-old transgender man who lives in Austin, Texas. "I used to deal with dysphoria a lot."

CBD, which stands for cannabidiol, is the second most common active ingredient in marijuana after tetrahydrocannabinol, or THC. CBD does not itself cause a high and has been touted to have medicinal properties.

Pollack came out as a lesbian when he was around 20 and as trans about four years ago, he told the Bay Area Reporter. He said that in this time of pandemic, finding a support system through social media would be helpful to people who are just beginning their transitions.

"The advice I'll give is what has always worked for me," Pollack said. "I've always connected with other people through social media. With COVID, that's what people have had to do anyway."

When asked how to do that, Pollack said that "typing in a specific hashtag can lead you to people in your community."

"That's always helped me find other people over the web who are interested in the same things I am," he added.

For those comfortable not being so physically distant, social media can also be a tool to find places near you that are LGBTQ-friendly, Pollack said. Though with the surging Delta variant, people may want to use caution attending in-person events and check regarding COVID protocols.

"For me, honestly, I'd say Google is my best friend," Pollack said. "Searching for LGBTQ meet-ups in the area, LGBTQ-owned places; that's always led me to places where I've felt more included."

One LGBTQ-co-owned place — even if it is entirely in virtual space — is Ziggy's. Pollack has been involved in the cannabis industry for six years, he said.

"I've always been an advocate for the plant and how it's benefited people," Pollack said.

The online market was his brainchild one Christmas, he explained, when his family was thinking about things it could do together.

"My dad [Marc] came to us one Christmas and I came up with the CBD company; we kind of went from there," Pollack said.

The company was named after Pollack's wife, to whom he's been married since June 2019.

"We started off as roommates seven to eight years ago," Pollack said. "Toward the end of that lease we were together and we've been since.

"I transitioned in our relationship as well — it was a transition for her, once very much viewed by society as being part of a lesbian couple and now very much as a straight couple," Pollack said. "It was a great journey."

Jake Pollack, a straight ally, said the business is a full-time endeavor.

The company also sells cannabis compound delta 8, which is similar to THC but less potent, and CBD-isolates, which is a form of CBD, Jake Pollack said, as well as apparel and pet products.

Jake Pollack said that the COVID-19 pandemic has not negatively impacted business.

"We haven't seen a downturn in business — we've seen an uptick," Jake Pollack said. "We've added partners for the team — social media people. My brother, Jordyn, has a really positive following on social media among the LGBTQ community in particular. In the past year we really started turning our efforts toward the LGBTQ community. We re-did our website and updated our logo, which includes the flag, and we are thinking of changing the logos on our products to that as well whenever we have to order more."

Jake Pollack said that he and his father are very proud of Jordyn and are happy they have gotten to know LGBTQ people better through him.

"I am a huge supporter of my brother and his journey and I've learned a lot from the people we work with as well about how to be confident — more than I ever thought I could," Jake Pollack said.