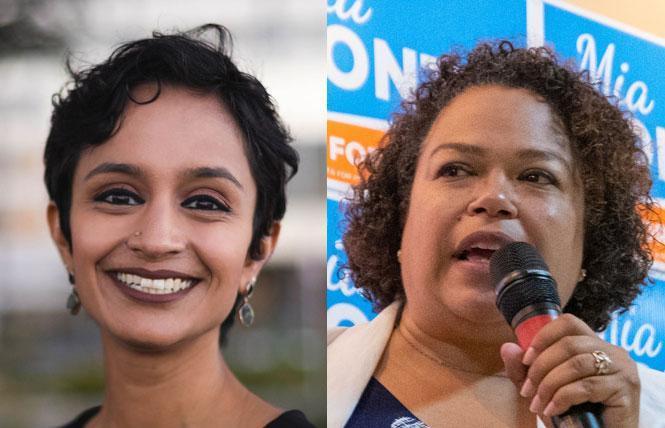 The East Bay Stonewall Democratic Club will not make an endorsement in the open 18th Assembly District special election after neither candidate garnered 60% of the vote during an online meeting August 3.

The special election is August 31.

Joe Greaves, political action chair of the Stonewall club, stated in an email August 4 that "For this endorsement vote, current members in good standing were given the opportunity to vote through the club's website between 5 and 8 p.m. on Tuesday, August 3. Fifty-four members voted out of 190 eligible members (28.5%)."

Per the club's bylaws, Greaves stated that an eligible candidate must receive at least 60% of the vote to be formally endorsed by Stonewall. In Tuesday's vote, neither candidate achieved that threshold to receive the club's endorsement, he wrote.

"Therefore, Stonewall will not be making an endorsement in the AD 18 special election," Greaves stated.

He thanked both candidates for engaging in the process.

"East Bay Stonewall looks forward to working with our next AD 18 Assemblywoman, whoever that may be, to advance the issues that are important to the LGBTQ+ community and our allies," Greaves stated.

This is the second time the Stonewall club has been unable to endorse in the race. None of the candidates reached the 60% mark in the spring when the club held a vote prior to the primary.

Both Ramachandran and Bonta are waging spirited campaigns in the closing weeks of the race.

As the Bay Area Reporter previously reported, the LGBTQ Victory Fund and the California Legislative LGBTQ Caucus have endorsed Ramachandran, 29, who also identifies as lesbian. If elected, she would be the first legislator who identifies as queer and first out API female state legislator. Of South Indian ancestry, she would also be California's first South Asian assemblywoman.

The California Asian and Pacific Islander Legislative Caucus solely endorsed Ramachandran. The first-time candidate has proved to be a formidable figure in the race, tapping into a network of family and friends for donations to amass a sizeable campaign war chest.

Bonta, 49, a Black Latina, was the first place finisher in the June primary, while Ramachandran came in second with neither surpassing the 50% vote threshold required to win the seat outright. One of the two is set to become the Bay Area's fifth female state legislator, representing Alameda, San Leandro, and a portion of Oakland in the Legislature's lower chamber.