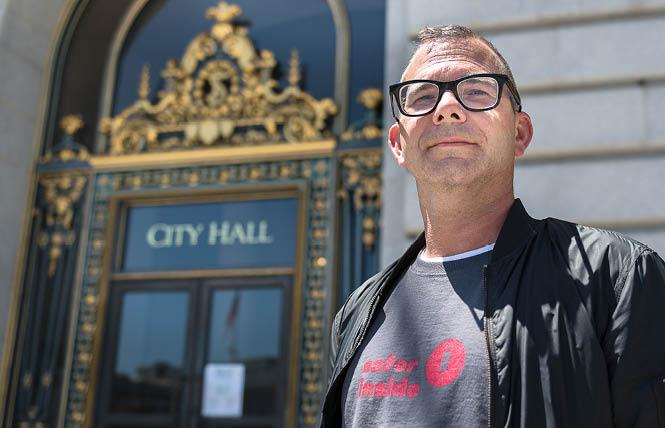 A gay San Francisco man who once battled drug addiction himself will end his hunger strike outside City Hall Tuesday at 6 p.m. following pledges by seven San Francisco supervisors to declare an emergency around the overdose crisis.

Gary McCoy, 43, said his first night sleeping in a chair in front of San Francisco's City Hall August 1 was "a little chilly," and 25 hours into his hunger strike, he was feeling "not as bad as I would have thought at this point."

"I'm staying hydrated, taking my meds, and keeping myself from the sun as much as possible," McCoy, who is HIV-positive, said August 2 around noon. "I had a really nice conversation with Supervisor [Rafael] Mandelman this morning. He stopped by to support. I've also talked with [Supervisor] Matt Haney to talk about what they can do."

McCoy staged a hunger strike in front of the seat of power in the city to demand that local leaders declare a state of emergency with regard to the drug overdose crisis, and take action to "authorize, fund, and implement" safe consumption sites.

In a Medium post before he set up his chair at Polk and McAllister streets, McCoy said the hunger strike was scheduled to coincide with Overdose Awareness Month, which is observed every August.

"Already this year, between January and June, 344 people have died of overdose — and 256 of those deaths were due to fentanyl," McCoy wrote, referring to San Francisco figures.

As the Bay Area Reporter previously reported, San Francisco made headlines for having twice as many deaths in 2020 from accidental drug overdoses (697) than from COVID-19 (257).

McCoy told the B.A.R. that if Mayor London Breed — whom he had worked for when she was a supervisor — declared a state of emergency, the city could authorize safe consumption sites "on city property with staff, protected by the city attorney should the state or federal governments try to stop it."

This is important right now, McCoy said, because gay state Senator Scott Wiener's (D-San Francisco) Senate Bill 57 — which would remove the current state prohibition and allow local authorities to decide whether to open safe consumption sites on a pilot basis in San Francisco, Oakland, and Los Angeles — has been stalled. Last month, the chair of the Assembly Health Committee said he would hold the bill until 2022.

Haney, a straight ally who represents District 6, the epicenter of the city's drug overdose crisis, told the B.A.R. that he authored "a resolution calling for it to be declared a public health emergency and for safe injection sites to open immediately two years ago."

He also asked Governor Gavin Newsom for state assistance and resources, according to KRON-TV.

Haney told the B.A.R. late August 2 that he plans to "introduce another resolution to support Gary's demands when we return" from the board's recess after September 7.

"I will also meet with him, the mayor's office and the [Department of Public Health] to push for action immediately," Haney wrote. "This shouldn't wait any longer."

As of noon August 3, Supervisors Mandelman, Dean Preston, Aaron Peskin, Myrna Melgar, Shamann Walton, and Connie Chan agreed to support Haney's resolution. McCoy told the B.A.R. 49 hours into the hunger strike that he would end it with just one more supervisor commitment, or the mayor's. Shortly after that, he received Walton and Chan's pledges.

Mandelman stated to the B.A.R. August 3 that "Gary's right."

"I support his call for a declaration of emergency," Mandelman said. "Nearly 800 people died of overdoses in San Francisco last year. If that's not an emergency, I don't know what is."

McCoy was a campaign manager for Wiener's 2014 reelection campaign. His old boss gave his support to the hunger strike in an August 2 statement.

"I'm incredibly proud of Gary for putting himself on the line to call attention to San Francisco's epidemic of overdose deaths," Wiener wrote. "We need new approaches, and safe consumption sites are a proven way to save lives. Gary has my full support, and I'll continue the effort in the Legislature to legalize safe consumption sites."

Breed stated that the city is spending $13.2 million this year in overdose prevention that includes SORT and other measures. This fall a center will open in the South of Market neighborhood that will have 20 temporary beds for people who are intoxicated to come in safely off the streets and be connected to care and services. Another is round-the-clock hours at the Market Street Clinic, an opioid treatment center at Civic Center that provides on-demand services for methadone, buprenorphine (an opioid used to treat opioid disorder), and counseling and primary medical care.

Position has changed
McCoy, a former district office staffer for House Speaker Nancy Pelosi (D-San Francisco), is currently director of policy and public affairs for HealthRIGHT 360 and co-chair of the Alice B. Toklas LGBTQ Democratic Club. He said that the first time he'd heard of safe consumption sites he opposed them. Formerly homeless, he overcame a methamphetamine addiction about 10 years ago, as theB.A.R. and San Francisco Chronicle have reported.

After telling the B.A.R. in an endorsement questionnaire for a seat on the San Francisco Democratic County Central Committee that he opposed safe consumption sites, McCoy "got calls from friends of mine at the [San Francisco] AIDS Foundation and other folks."

"They educated me on the need" for the sites, McCoy said, and he turned into "a very staunch supporter."

Laura Thomas, director of harm reduction policy at SFAF, did not respond to a message seeking comment.

McCoy said that the way that the city has dealt with the overdose crisis so far juxtaposes with how it handles the COVID-19 and HIV/AIDS crises.

"San Francisco was a model for how we start in a crisis with no warning and immediately," McCoy said. "I know our city leaders care about the population who use drugs. I want to make sure it's not on the backburner."

In a Facebook post, McCoy brought up an example from the city's past to showcase what can be possible now.

"In 1995, the city had taken the position that the AIDS epidemic was an emergency necessitating extraordinary prevention measures when distribution of syringes was illegal in California without a prescription. Every 14 days, Mayor [Frank] Jordan, in concert with the San Francisco Health Commission, and San Francisco Board of Supervisors, declared a state of emergency, saying the distribution was necessary to save lives. The Board of Supervisors voted unanimously in agreement to support the mayor's declaration," he wrote.

"All of this, despite the California attorney general issuing an opinion on the practice of syringe access being illegal, and that public officials breaking the law could be ejected from office or go to jail," McCoy continued. "San Francisco has shown there is a clear precedent for doing what is right during a public health crisis when it has the political will to do so. As I roll into day 2 of not eating, still sitting outside City Hall, I'm pleading that our city leaders commit to declaring the overdose crisis a state of emergency, and authorize the use of safe consumption sites."

HealthRIGHT 360, McCoy's current employer, came out with a statement about Overdose Awareness Month on August 2.

"The current response to drug-use breeds secrecy, deception, shame, and stigma," HealthRIGHT 360 stated. "Driven to purchase drugs from illegal and unregulated sources, our current policies continue to fuel overdose deaths as individuals face the risk of a fatality from adulterated drugs of unknown potency or provenance. Let's consider some alternatives that have been proven effective: Decriminalizing drugs, supervised consumption services, and safer supply.

"Supervised consumption services (SCS) found throughout much of Europe and Canada, are programs where people who use drugs can bring pre-obtained drugs to consume in a safe environment, using sterile equipment, and under the supervision of service staff who can intervene in the event of a drug overdose," it continued.

Anubis Daugherty, a bisexual person who was visiting McCoy, said he was there for "moral support."

McCoy said his strike won't end "until we have a firm commitment from someone [that] we will move forward — whether it's the mayor that she'll do that [declare a state of emergency] or the Board of Supervisors saying that after recess they'll support doing this."

"I also think he is absolutely right that the city can and should move forward with this now," Haney wrote.

Breed's office did not respond to requests for comment.

Editorial: Breed should get behind OD emergency
Sign up!