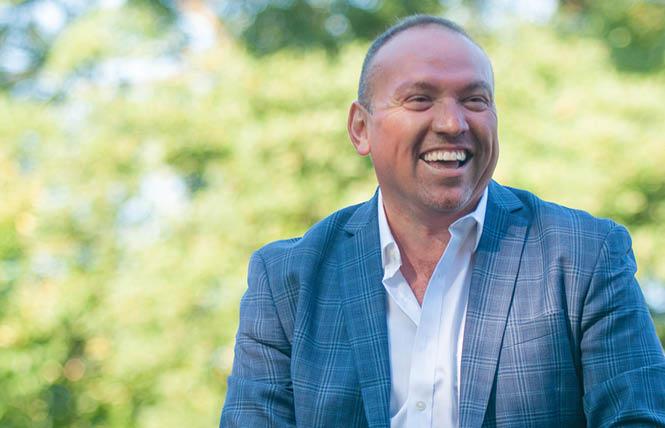 Orlando Gonzales is the executive director of Safeguarding American Values for Everyone in South Florida and has called out a Republican congresswoman who voted against the Equality Act earlier this year. Photo: Courtesy Orlando Gonzales

LGBTQ rights groups are continuing to call attention to the Equality Act even as it remains stalled in the Senate more than five months after the House of Representatives passed the landmark bill.

Meanwhile, in Florida, LGBTQ activists last month questioned a Republican congresswoman who voted against the Equality Act earlier this year.

In June, an analysis of scholarly research by the National Black Justice Coalition, the National Center for Lesbian Rights, National LGBTQ Task Force, and Freedom for All Americans showed that the discrimination that would be banned by the Equality Act disproportionately affects LGBTQ ethnic and racial minorities.

"The research brief, authored by the What We Know Project at Cornell University, found overwhelming consensus among peer-reviewed and other studies that discrimination inflicts profoundly greater harm on LGBTQ people of color in a wide range of areas, including grossly disproportionate rates of: experiencing discrimination over the past year, poorer mental and physical health, greater economic insecurity, and attempts to die by suicide," the analysis states. "In addition, LGBTQ people of color are more likely than white LGBTQ people to live in states without protections against discrimination and that state anti-LGBTQ laws harm LGBTQ people."

The research found that self-identified LGBTQ people are more likely to be people of color than non-LGBTQ people by a 10% margin, 42%-32% according to the Williams Institute, an LGBTQ think tank at UCLA School of Law, and that a majority of Black LGBTQ Americans live in the South, which generally has fewer anti-discrimination protections than other regions. (The data was based on a Gallup Daily Tracking poll of 341,000 U.S. adults in 2017, about 21,000 of whom identified as LGBT)

"Hundreds of studies conclude that experiencing anti-LGBTQ discrimination increases the risks of poor mental and physical health, including depression, anxiety, suicidality, PTSD, substance use, and psychological distress," the analysis states, referring to post-traumatic stress disorder. "LGBTQ people of color face disproportionate odds of suicidality, which is linked to discrimination."

"While supportive laws, family, and peers lower the risk of poor health outcomes for LGBTQ people of color, anti-LGBTQ state laws inflict tangible harm on sexual minority populations," the analysis states. "For example, states with 'denial of service' laws that give a license to discriminate against LGBTQ residents between 2014 and 2016 were linked to a 46% increase in LGBTQ mental distress. Black LGBTQ youth who reported high levels of support from at least one person, or who had access to an LGBTQ-affirming space, reported attempting suicide at lower rates than those who lacked such support (16% vs. 24%)." (These numbers were first reported by JAMA Psychiatry and the Trevor Project.)

The Equality Act, first introduced in 2015 by gay Representative David Cicilline (D-Rhode Island), has passed the U.S. House of Representatives twice, in 2019 and in 2021. It would amend the Civil Rights Act of 1964 to prohibit discrimination on the basis of sexual orientation and gender identity in employment, housing, public accommodations, education, credit, jury service, and any program receiving federal funding.

Last year the U.S. Supreme Court, in the case of Bostock v. Clayton County, extended the employment protections of the 1964 Civil Rights Act to LGBTQ people. The Equality Act would also extend the anti-discrimination protections on the basis of race to exhibitions, goods and services, and transportation.

"This important brief only further solidifies what we have known for a very long time — the combination of racism and anti-LGBTQ discrimination has serious and long-lasting effects for the health and well-being of LGBTQ people of color," stated Imani Rupert-Gordon, the executive director of the National Center for Lesbian Rights. "This research highlights why federal non-discrimination protections are overdue and vital to protecting the most some of the most underrepresented and vulnerable members of our community. Federal anti-discrimination protections are absolutely necessary in protecting and supporting all LGBTQ people, and this is especially true for LGBTQ people of color."

David Johns, a same-gender loving man who is the executive director of the National Black Justice Coalition, put the analysis in the context of intersectionality.

LGBTQ rights group confronts Florida congresswoman
When the Equality Act came before the House on February 25, among the 206 representatives voting against it was Congresswoman Maria Elvira Salazar (R-Florida).

Salazar, a former TV reporter and an assistant whip in the Republican caucus who was sworn into her Miami-Dade seat this year, told the Miami Herald that the Equality Act "missed the mark by removing religious freedom protections."

Salazar is a supporter of the Fairness for All Act, a competing bill that would provide federal protections for LGBTQ people in housing, education, and public accommodations; but simultaneously carves out compliance exemptions for churches and religious organizations, including nonprofits like church-affiliated adoption agencies. Introduced by Representative Chris Stewart (R-Utah), the Fairness for All Act is seen as a compromise by conservative religious groups such as the Church of Jesus Christ of Latter-day Saints.

"It is hard to really love our neighbors when we are fighting with them over whose rights are more important," Stewart stated February 26 when he re-introduced the act. "This country can accommodate both civil liberties for LGBT individuals & religious freedom. We have wasted enough time, energy, and money fighting over who deserves which legal protections. It is time to define the federal protections for our LGBT and religious friends and neighbors."

Orlando Gonzales, the executive director of Safeguarding American Values for Everyone in South Florida, told the Bay Area Reporter it was very upsetting that after voting against the Equality Act, Salazar asked Floridian LGBTQ leaders for a round table in the middle of Pride Month.

"Many of us pushed back," Gonzales said. "We didn't want to pinkwash her when she voted against the Equality Act. We didn't want a photo-op."

(Rainbow-washing, or pinkwashing, refers to the practice of some corporations to commemorate Pride Month with rainbow avatars online, products marketed toward LGBTQs, or supportive statements, while behind the scenes engaging in practices that are harmful to queer people such as, for example, donating to politicians who are against LGBTQ rights.)

Gonzales said that the leaders agreed to a round table, but only after it was "pushed back till July."

An estimated 20 people attended the July 2 invitation-only meeting, when SAVE asked Salazar to "pledge to support the Equality Act and call for its passage in the Senate; denounce the attacks on transgender youth in Tallahassee and help to create a state where transgender Floridians are respected and welcomed; [and] work with us to grow the bipartisan coalition calling for comprehensive federal LGBTQ non-discrimination legislation in this Congress."

"One to two people were there to provide her support and applaud her actions," Gonzales said. "The representative said she was torn between the religious community and the LGBT community. That lacks sophistication because LGBT people are also people of faith, and it lacks a comprehensive understanding of the Equality Act."

Gonzales stressed that the Equality Act has a ministerial exception, "but not to use religion as a form and method to discriminate."

"The Equality Act would never make a Catholic priest conduct a same-sex marriage," Gonzales explained. "But what it doesn't do is let a religious hospital prevent people from needed medical care because of a religious position. That's what she [Salazar] is advocating for."

Salazar's office did not respond to multiple requests for comment.

Gonzales compared Salazar unfavorably to her predecessor in the seat, LGBTQ ally former Congresswoman Ileana Ros-Lehtinen (R-Florida), who in July 2012 became the first Republican in the House of Representatives to support same-sex marriage.

"She's the mother of a transgender son and was always very supportive of the community," Gonzales said. "Representative Salazar is failing greatly."