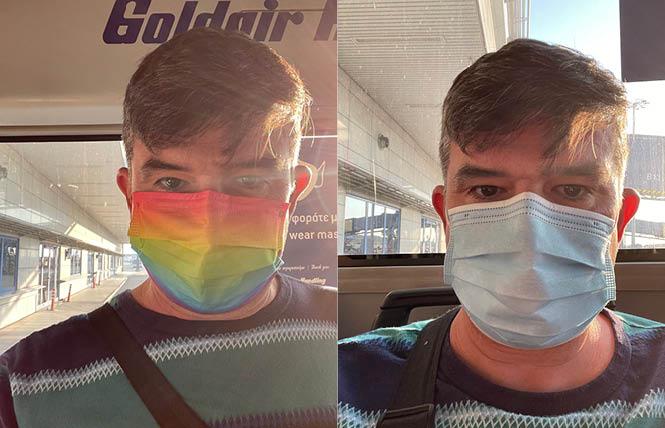 On his flight out of Los Angeles International Airport earlier this month for a 46th birthday vacation in Greece, gay West Hollywood resident Scott Schmidt donned a rainbow-colored surgical mask in order to adhere to the COVID-19 guidelines imposed by his carrier, Lufthansa. Photos from the trip that he posted to his Facebook account show Schmidt seated on his July 16 flight next to his fiancé wearing the face covering in the colors of the international symbol for the LGBTQ community.

Yet, on his return flight from Athens via Munich to LAX Saturday, July 24, a gate agent informed Schmidt he couldn't wear the rainbow mask. The woman told him he needed to put on "a normal mask" in order to board the bus that was ferrying passengers from the terminal to the plane parked on the tarmac at Athens International Airport.

"When I checked in at Los Angeles and took our flight out of LAX I had no problems. The gate agent at LAX had looked closely to see if it was a medical mask," Schmidt told the Bay Area Reporter in a phone interview Monday, July 26. "Lufthansa's policy is to require surgical face masks or the masks that are the KN95 kind. The cloth masks we wear commonly here in the states aren't acceptable for them."

According to the mask policy posted on Lufthansa's website, German federal and state legislation require passengers to wear the same face masks that are "worn in everyday medical practice, also known as surgical masks. They are medical products and were designed for the protection of others."

Schmidt told the B.A.R. he was aware of the airline's mask policy and had ordered a 60-pack of the disposable rainbow-colored masks made by Tomorotec via Amazon ahead of the couple's trip. The etailer had marked them as being "in Medical Procedure Masks."

"I am not fond of the light blue ones. It looks like you are wearing a diaper on your face," said Schmidt. "I found these rainbow ones on Amazon and ordered some. The whole point is visibility matters."

Neda Jaafari, a spokesperson for Europe, Middle East and Africa with Lufthansa, which uses a rainbow-themed logo with its corporate Twitter account, responded late Monday to the B.A.R.'s emailed questions regarding Schmidt's experience to say she would "look into this ASAP."

Taken aback by the rejection of his rainbow mask by the gate agent, Schmidt decided not to argue with the woman and demand he be allowed to wear it. Instead, he put on a solid blue-colored mask he had in his carry-on luggage.

A hotel the couple had stayed at during their trip had left a safety pack in their room containing hand sanitizer and several of the blue surgical masks. As he likes to keep the freebies hotels provide their guests, Schmidt had grabbed it when they checked out.

"When I went to get on the plane, and the gate agent scanned my boarding pass, she said, 'You need to put on a normal mask.' I asked her what that meant and showed her the one I got from the hotel, which was a blue one," said Schmidt. "She said, 'That is OK,' so I switched it off and got on the plane. I didn't want to cause a scene or get kicked off my flight because I was taken to be an anti-masker."

He was cognizant of the messages Lufthansa had played in the airport that passengers who did not comply with the mask mandate would be reported to the relevant authorities.

"I didn't want to be reported to the relevant authorities, so I figured I would just comply," said Schmidt.

As he boarded the plane Schmidt noticed passengers wearing colored masks, though they were all monochrome. Asked if he felt the agent rejected his rainbow hued one due to its symbolism for LGBTQ rights, Schmidt said he could not be certain what her motivations were.

"It shouldn't matter honestly cause their only requirement is it be a surgical mask, and it was a surgical mask," he said. "Why she thought it wasn't, I can't tell you why."

Nor is he sure the woman was an employee with Lufthansa or employed with a local company the airline contracts with to manage its gate operations at the Athens airport. Nonetheless, after he landed back in California, Schmidt posted about the mask incident on Twitter and tagged Lufthansa on it.

Late that evening Schmidt received a response from a Lufthansa customer service agent who had misunderstood his message to the company as seeking an exemption to its mask policy.

He has also emailed several LGBTQ advocates in Europe and Greece to inform them of his experience. Schmidt also contacted the B.A.R. to help publicize the incident and inform other LGBTQ Americans who may be traveling overseas this summer or fall that they may want to pack generic face masks along with any masks bearing special patterns or designs.

"They weren't providing them for people," Schmidt said in terms of the airline having a mask it could have given him to wear. "I think for travelers, it is important to respect the laws and rules in other countries. We have all been through this pandemic in different spaces and different experiences; I was trying to do my best to comply and do it with my own style.

UPDATED 7/27/2021with responses from Lufthansa.