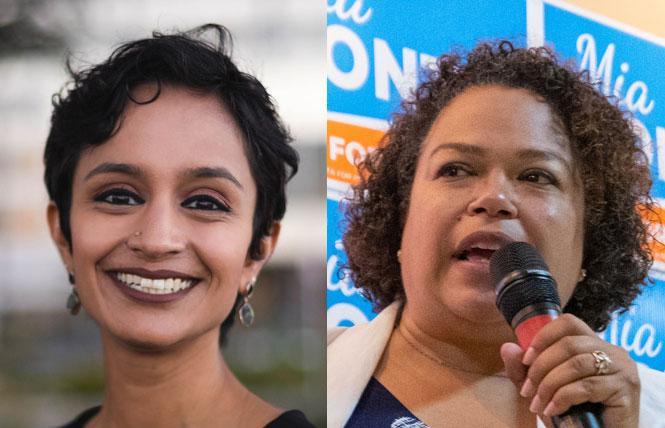 With the Bay Area region's lack of affordable apartments to rent and sky high home prices, both of which are exacerbating the number of unhoused individuals on the streets, the housing policies promoted by the two candidates in the special election for an East Bay Assembly seat have been a key focus of the race.

Bonta, 49, a Black Latina, was the first place finisher in the special primary contest last month, while Ramachandran, 29, of South Indian ancestry, came in second with neither surpassing the 50% vote threshold required to win the seat outright. One of the two is set to become the Bay Area's fifth female state legislator, representing Alameda, San Leandro, and a portion of Oakland in the Legislature's lower chamber.

If elected, Ramachandran would be the first legislator who identifies as queer and first out API female state legislator. Of South Indian ancestry, she would also be California's first South Asian assemblywoman.

The two candidates have both drawn considerable support within the local and statewide Democratic Party, which is backing Bonta in the runoff race. Equality California, the statewide LGBTQ advocacy organization, in June dual endorsed Bonta and Ramachandran.

Both the Harvey Milk LGBTQ Democratic Club and the Bay Area Reporter gave sole endorsements to Ramachandran, as did the East Bay Times newspaper in May. The Democratic Legislative Women's Caucus this month endorsed Bonta, while the Alameda Democratic Club recently threw its support behind Ramachandran.

As part of the questionnaire the B.A.R. sent candidates in the race ahead of the special election held June 29, they were asked to specify what housing solutions they would advocate for if elected. They were also asked to explain their stance on allowing multi-unit housing, such as fourplexes, to be built in the district in light of the ongoing debate about such infill development being allowed particularly in suburbs with single-family homes.

Ramachandran, an Oakland resident who also identifies as lesbian, would be one of only three tenants out of the 120 members of the state Legislature. She considers housing to be a human right, and wants to repeal both the Ellis Act and Costa-Hawkins state laws that prevent local cities from enacting tougher eviction protections for tenants.

"We must proclaim that right, beginning with building more affordable housing, by providing better services for our houseless neighbors, and by reforming anti-tenant state laws," Ramachandran told the B.A.R.

She noted the issue is particularly acute within the state's LGBTQ community.

"I would also advocate for policies that address the need for greater services for our houseless LGBTQ population and discrimination in the housing and rental industry," she pledged. "LGBTQ adults are twice as likely as the general population to experience homelessness, which is significantly higher among Black and Latinx LGBTQ communities. Thirty percent of transgender individuals in California have experienced homelessness during their lives."

Bonta, raised by a single mother on the East Coast and having faced housing insecurity during her childhood, told the B.A.R. she would work to ensure that the needs of tenants are addressed by state legislators.

"I will proactively work with my colleagues in the Legislature to ensure that renters' voices are heard during the housing debate," she pledged.

As for in-fill developments, Bonta supports policies that allow for the construction of denser housing in residential neighborhoods as long as they don't lead to the displacement of current residents forced out by higher housing costs.

"In general, new housing should be built 1.) in traditionally single family neighborhoods which held exclusionary zoning ordinances that discouraged growth and discriminated against people of color, and 2.) near transit hubs as a form of transit-oriented development to address the nexus between the climate crisis and transportation/vehicle miles traveled to and from employment," Bonta told the B.A.R. "However, above all else, it is critical that new housing developments not fuel displacement and gentrification."

Any allowances for new housing to be built must also guarantee that the housing will be affordable to lower and middle class individuals, argued Bonta.

Due to the COVID-19 pandemic upending people's income, Ramachandran told the B.A.R. she backs the extension of the eviction moratoriums elected leaders enacted to prevent a tidal wave of tenant displacement for lack of paying rent and foreclosures on the homes of people unable to afford their mortgages.

"One hundred and sixty thousand Californians are unhoused on a given night. Over 2 million can't afford to pay rent next month," she noted. "Tens of thousands face eviction in a pending 'eviction tsunami.' Shameful for a state led by a party that proclaims that housing is supposedly a human right."

The state needs to develop a 10-year plan addressing homelessness, contended Ramachandran, that has the voices and ideas of unhoused individuals at its center. While she didn't directly address the issue of multi-unit housing, Ramachandran called for the immediate building of tiny homes across the state to move people off the streets, similar to Oakland's Tiny House Village.

"We need to build 250,000 more units per year for the next six years for demand and supply to align, but we need to be sure that it isn't done at the cost of evicting tenants and we ensure housing is truly affordable," she told the B.A.R.

The Political Notes column is taking a summer recess. It will return Monday, August 16.