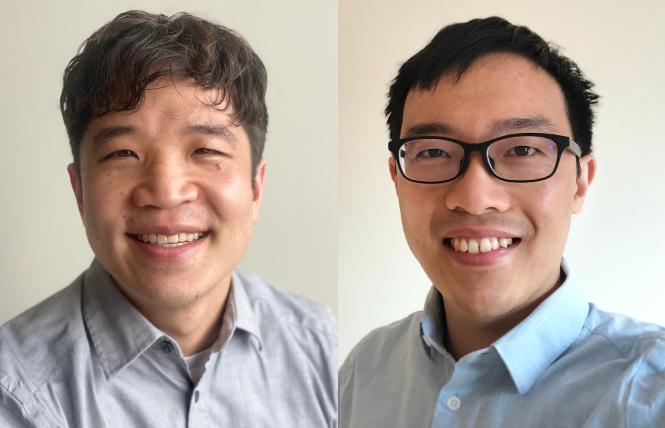 Jeremy Lee, left, and Chasel Lee were selected to be on the task force that will redraw the boundaries of San Francisco's 11 supervisorial districts. Photos: Courtesy Jeremy Lee and Chasel Lee

Two out men will have a hand in reconfiguring San Francisco's political map as members of the city's decennial redistricting task force. Their work will redraw the boundaries for the city's 11 supervisorial districts ahead of the fall races next year for the even-numbered seats.

Another member of the LGBTQ community could join the 2021-2022 Redistricting Task Force depending on whom Mayor London Breed appoints to three of its nine seats. She has until July 31 to announce her trio of picks to the panel, which is expected to begin meeting in August.

It has until April 15 to complete its work reshaping the boundaries for the supervisor districts. A separate state body will redraw the city's two Assembly districts and one state Senate seat, as well as the two congressional districts that currently include parts of San Francisco.

Chasel Lee, who lives in the city's Lakeshore neighborhood in District 7, is an attorney with the California Public Utilities Commission. The son of Chinese immigrants and fluent in Cantonese, he was born in Chinatown and raised in Visitacion Valley. His neighborhood was routinely forgotten about at City Hall when it came to funding and services, Chasel Lee noted.

"I understand the power of redistricting on people's lives," Chasel Lee told the Bay Area Reporter in a phone interview. "What district you fall in determines the amount of resources you get, the representative you have, how strongly the representative fights for your community, and if you are included or are excluded from the table."

At the same time, Chasel Lee told the B.A.R. he is fully aware of the scrutiny the task force will be under by political interests in the city.

"I am not naïve enough to think that partisan interests aren't going to try to sway the process. But I do believe, at the end of the day, all members of the task force — be they lean moderate or progressive — will come together for the city and work in the interests of the people and diverse neighborhoods of the city," he said.

Jeremy Lee lives near the Civic Center in District 6 and is an asset management coordinator at the Chinatown Community Development Center. He told the B.A.R. he wanted to serve on the task force to ensure the city's Asian Pacific Islander and LGBTQ communities had representation.

"For me, I am beholden to my community. I work and do everything in the best interest of my communities, whether the Chinese community, the Chinatown community and whether it is the LGBTQ community," he said in a phone interview. "I am beholden to those people. I will always fight for the most vulnerable and most marginalized people."

While they have both worked on various local campaigns in the past, the two insisted to the B.A.R. that their past political affiliations will not cloud their decisions on the redistricting panel. Chasel Lee was involved with the campaign, for instance, of Assemblyman Phil Ting (D-San Francisco) and donated to District 7 Supervisor Myrna Melgar's campaign, Breed's mayoral campaign and that of her 2019 appointee as district attorney Suzy Loftus.

Jeremy Lee worked part-time on former District 6 supervisor Jane Kim's mayoral bid. A member of the progressive Harvey Milk LGBTQ Democratic Club, he is also vice president of the Rose Pak Democratic Club. He noted to the B.A.R. that he has volunteered on a number of campaigns from all parts of the political landscape.

"I just felt, given my experience in politics and given my activism and advocacy work within San Francisco's API communities, I had the experience and the knowledge to make these decisions," said Jeremy Lee.

Keeping communities whole
The city and state redistricting bodies both will be working off the demographic data from the 2020 census, which should be released sometime in September. The state panel recently sought permission to delay its deadline to complete its work until mid-January, as the release of the data from the federal census bureau has been delayed due to the COVID-19 pandemic. The new lines it draws will be used for the June primary in 2022.

Maintaining intact communities of interest, such as the LGBTQ community, are to be taken into consideration by both the statewide and local redistricting bodies. Thus, the city's Castro LGBTQ neighborhood, currently within the eighth supervisorial district, should not be split into two supervisor districts.

Nor should the transgender-identified Tenderloin neighborhood or the historic LGBTQ district South of Market be diced up into multiple supervisor districts. Both are now in District 6.

It is the areas on the boundaries of the districts that could potentially be changed. Previous redistricting efforts led to calls, for example, to maintain both the LGBT Community Center on upper Market Street and the nearby LGBTQ senior housing and offices of nonprofit Openhouse within District 8 and not be moved into the adjoining District 5.

When asked about keeping the three LGBTQ areas whole in the new district boundaries, the two Lees both told the B.A.R. they would be taking the concerns of the residents of those neighborhoods into consideration.

"I am going to look for things like voices on the ground and the people who live in those neighborhoods. I am not going to prejudice myself one way or another, especially before the task force meets," said Chasel Lee. "But I understand those concerns. Some people do want to keep those together."

He pledged that the task force would seek out input from various communities throughout the city.

"I look forward to hearing those voices on keeping communities of interest together again," said Chasel Lee. "We will definitely hear from those voices, and I welcome them."

Asked about the possibility of seeing District 8 disassembled, with Noe Valley combined with parts of the Mission district for example, Jeremy Lee told the B.A.R. he is "very reluctant" to agree to a wholesale redrawing of how the supervisor districts historically have been drawn.

"I don't really see myself being in favor of a complete reimagining of the district lines in our city. I do want to put value on precedent," he said. "People living here are used to having people represented with these other communities. They have built relationships with those folks."

He acknowledged the work "is going to be tough" and how District 6 gets reshaped will impact the boundaries for all the other supervisor districts. Because it has seen the most new development over the last 10 years, bringing in an influx of new residents, it is likely to see the biggest changes as the task force works to draw up districts with an evenly divided number of residents.

"Everyone knows District 6 is where all the changes are going to happen, so how D6 will change will have ripple effects on the neighboring districts," said Jeremy Lee. "So, for me, one of my core things when I think about D6 is preserving the voice of low-income folks in the Tenderloin and SOMA. Keeping those neighborhoods whole is one of my top priorities."

The Elections Commission's other two picks for the task force were Raynell Cooper, 26, a biracial Black man who lives in District 5 and is the residential parking policy manager with the San Francisco Municipal Transportation Agency's Parking and Curb Management Team, and District 2 resident Ditka Reiner, who emigrated from Hungary as a child and is now retired from the information technology consulting firm she founded.

A spokesman for Breed did not respond by press time to the B.A.R.'s questions on when she will announce her picks and if any would be from the LGBTQ community.

UPDATED 7/28/2021to clarify the state district boundaries should be finalized by mid- and not late January.

UPDATED 7/22/2021 to clarify that Chasel Lee did not work on but donated to District 7 Supervisor Myrna Melgar's campaign.