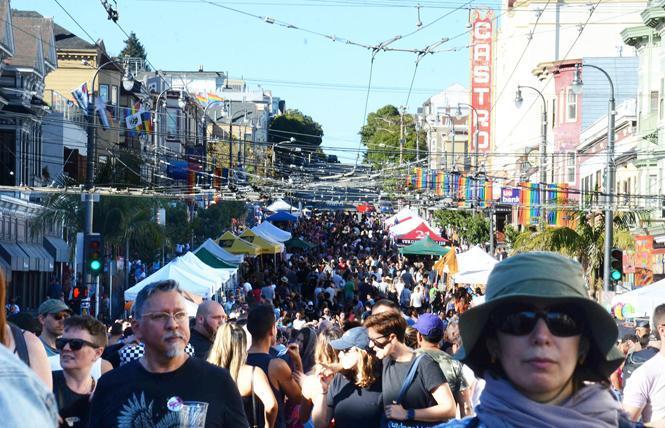 After being mothballed last year due to the COVID-19 pandemic, a festival launched in the 1970s by the late gay supervisor Harvey Milk to celebrate San Francisco's LGBTQ Castro district will return this fall.

Organizers of the Castro Street Fair are planning to host an in-person event Sunday, October 3, according to the president of the fair's board of directors.

"We are pleased to announce that planning has begun for this year's Castro Street Fair," Jenn Meyer, a straight ally who is the board president, stated to the Bay Area Reporter and announced on social media. "Although it may look a little different pending potential guidance from [the San Francisco Department of Public Health], we look forward to seeing you all in person on October 3, 2021."

Meyer, the owner of Local Take gift shop on 17th Street, told the B.A.R. that the decision to hold an in-person fair was made by the board of directors "in the last month or so."

"We've started conversations with our community partners to determine the best way to present the fair this year," she stated in an email.

"The vaccines have been a game-changer, and I look forward to the resumption of one of San Francisco's great community events," Mandelman stated.

As the B.A.R. previously reported, last year's fair was canceled due to the health crisis. In its place people were asked to participate in a Castro scavenger hunt, buy T-shirts emblazoned with "Hope will never be silent" (a quote widely attributed to Milk, though it is unclear when he first said it) and post past photos of the fair to social media with the #CastroStreetFair hashtag.

Milk founded the Castro Street Fair in 1974, three years before his historic election to the San Francisco Board of Supervisors, as a way for the LGBTQ people who had moved into the neighborhood that decade to become a closer community. It has undergone multiple changes over the decades in terms of its layout, vendors, and activities offered throughout the day.

The popularity of the event has waned in recent years, with fair organizers five years ago shrinking its footprint due to the smaller crowds. Concerns that it could be scrapped altogether brought renewed community attention to the fair in 2018, and the 2019 fair was the first since 2016 that included the block of Market Street between Castro and Noe streets in its footprint.

That 2019 expansion will "probably" continue this year, Meyer said, though both this and whether or not there will be a booklet commemorating the event, like in previous years, "will be decided in the planning as we move forward."

This year's date means it will be the first time in many years that the Castro fair will not be competing with Gay Days at Disneyland in Anaheim, which will be occurring September 17-19.

The fair will take place exactly one week after Megahood 2021 in the South of Market neighborhood, which Folsom Street Events will be producing in lieu of the Folsom Street Fair. The Castro fair typically takes place the first Sunday in October, a week after the annual leather and kink fest.

This year on the following Sunday, October 10, the organizers of San Francisco Pride will be holding their inaugural LGBTQ+ Freedom Festival in honor of National Coming Out Day, observed on October 11 each year. The exact location of where it will take place has yet to be disclosed, with Pride officials so far stating that it will be held "in one of San Francisco's most vibrant neighborhoods" and feature exhibitors, entertainment, and other activities. (That's also the weekend of Fleet Week.)

After the initial publication of this story, Castro Merchants President Masood Samereie gave a statement to the B.A.R. in which he welcomed the fair back.

"We are very pleased to see the return of the Castro Street Fair as it serves as a cornerstone event for our community, not just for residents and visitors, but for the merchants of the Castro as well," Samereie stated. "This year in particular, foot traffic to the Castro is critically important as businesses build back following a devastating 2020. We hope everyone makes an extra effort to attend and further demonstrate our iconic neighborhood's resiliency and vibrancy in effort to help our small businesses recover.

"Naturally, we urge all participants to observe proper COVID protocols during the event, and we hope this signals the return of larger gatherings, which have been the calling card for the Castro and for San Francisco for decades," he added.

The Castro LGBTQ Cultural District told the B.A.R. it had no comment.

Updated, 7/21/21: This story has been updated with comments from Supervisor Rafael Mandelman.

Updated, 7/22/21: This article has been updated with comments from the Castro Merchants Association.

Updated, 7/23/21: This article has been updated with additional comments from the fair board president.