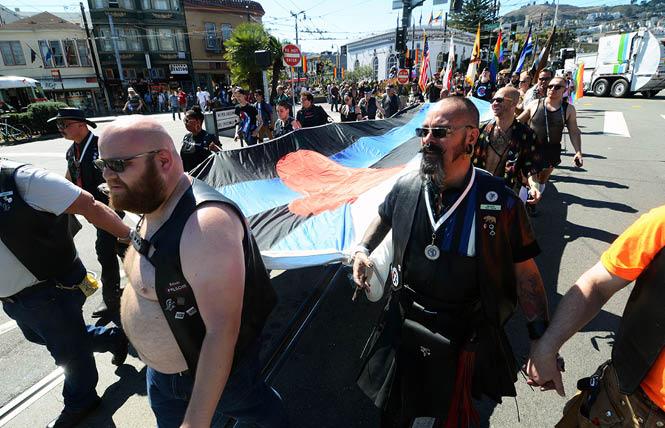 Participants carried a giant leather flag along Market Street for the 25th anniversary of LeatherWalk in September 2016. This year's event will see a new route for the walk. Photo: Rick Gerharter

The San Francisco LeatherWalk will return this fall after being on hiatus for several years. The event, with a new route, will help to kick off Leather Week in late September.

Meanwhile, city officials have agreed to include a number of leather-themed elements as part of the streetscape improvement project for Folsom Street. When construction wraps in 2024 crosswalks in the colors of the leather flag will be among the new features found between Seventh and 11th streets on one of the main thoroughfares in South of Market.

The revised LeatherWalk is expected to snake its way along a segment of Folsom Street in that area as it makes its way from City Hall to the gay-owned Eagle bar at the intersection of 12th and Harrison Streets Sunday, September 19. The bar will host a Leather Pride Festival that afternoon within its confines and on the leather-themed Eagle Plaza parklet that fronts it on 12th Street.

It will bookend the fetish and kink street fair being held Sunday, September 26. Dubbed Megahood 2021, it is being held in lieu of the Folsom Street Fair this year due to the ongoing COVID-19 pandemic.

The exact route and kickoff time for the LeatherWalk have yet to be determined. Those details likely will be revealed at a relaunch party for the LeatherWalk being held from 6 to 7:30 p.m. Thursday, July 29, at the Eagle. The board of the Leather and LGBTQ Cultural District, which comprises a section of Western SOMA, is now overseeing the walk.

The cultural district recently acquired the license to the LeatherWalk from PRC. For legal reasons, it paid the nonprofit agency a nominal fee of $10 in making the transaction, though the district has no intention of requiring groups who mount LeatherWalks in other cities to pay it in order to use the name.

"We own the entire rights: the domain name and all the associated stuff," said Robert Goldfarb, a gay man who is the president of the cultural district's board. "It is not something we are considering, licensing it out to groups in other cities. We are primarily focused on restarting the walk and getting the one in San Francisco moving again."

LeatherWalk history
The first LeatherWalk was held in 1992 by Art Tomaszewski, a former AIDS Emergency Fund board president and former Bare Chest Calendar man and Mr. Headquarters Leather. In 2001, Sandy "Mama" Reinhardt, a longtime leather community member and fundraiser, took over production of the walk.

Mr. San Francisco Leather 2010 Lance Holman, who had been a longtime walk volunteer for AEF and its former sister organization the Breast Cancer Emergency Fund, assumed leadership of the walk in 2013. Two years later Folsom Street Events, which produces the Folsom Street Fair, took over organizing the annual event in partnership with AEF/BCEF in an effort to boost participation and increase the amount of money raised for the trio of nonprofits.

After a leadership change at the nonprofit group that oversees the fetish fair and its smaller counterpart the Up Your Alley Fair, Folsom Street Events decided not to hold a LeatherWalk in 2019. The owners of the Eagle held a Leather Parade that September in lieu of the walk, which wasn't held last year due to the COVID-19 pandemic.

PRC acquired the license to the LeatherWalk when it merged with AEF in 2016. BCEF at the time became its own standalone entity. With it now overseeing the annual AIDS Walk and hosting other fundraisers throughout the year, PRC decided to relinquish its oversight of the LeatherWalk.

A spokeswoman for the agency said it had no comment for this story and directed the B.A.R. to the cultural district, since its manager Cal Callahan used to work at PRC. He had been employed by AEF prior to the merger.

Callahan told the B.A.R. the $10 fee for the LeatherWalk was the idea of the cultural district. He thanked PRC for agreeing to turn over control of the event to the district's board.

"PRC has been extremely generous and extremely supportive with this," he said. "We are really grateful. A lot of PRC clients are constituents of the district, so it does make sense. We have more connections with the community who is going to want to do this."

New route
The cultural district decided to change the start of the LeatherWalk from the Castro to City Hall for several reasons. A leather flag is no longer raised on the flagpole at Harvey Milk Plaza in the LGBTQ neighborhood, so there isn't a need to have a kickoff ceremony at the site.

Plus, the previous route from the public parklet to the first stop in SOMA was fairly long for attendees who are often dressed head-to-toe in leather outfits and are walking during a time of year when San Francisco sees its hottest temperatures. Moving the start of the walk to City Hall will mean it will take fewer blocks to reach the first stop, as attendees pop into various businesses along the way, from LGBTQ-owned stores and eateries to bars in SOMA, as a way to boost their sales that day.

"I don't think there is a more boring walk than walking all the length down Market Street. There is nothing to do there," noted Ms. San Francisco Leather 2013 Val Langmuir, a gender-nonconforming woman who is also nonbinary and serves on the cultural district board.

It also makes sense to set off from City Hall since city leaders help fund the leather district and have been supportive of its creation and projects within SOMA over the years, Langmuir pointed out.

"As we are a part of the city's apparatus, why not celebrate the city that celebrates us by starting off our march by City Hall? It is kind of celebrating the city's celebration of us," said Langmuir. "The fact is we live in such a progressive city that has the first leather cultural district anywhere in the world." 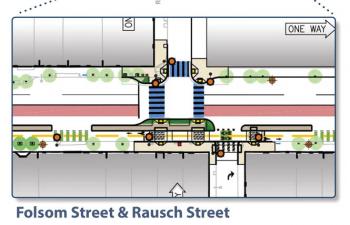 Leather-themed elements, like this crosswalk, will be incorporated into the Folsom Streetscape Improvements Project.

Streetscape project to sport leather flair
At the request of the leather cultural district, city officials have incorporated several leather-themed elements into the Folsom Streetscape Improvements Project. Crosswalks in the black and blue colors of the leather flag will be painted at the entrances to the alleys Langton, Rodgers, Dore, and Juniper Street.

Where the alley Rausch crosses Folsom Street, leather-themed crosswalks will be added to both the entrance into Rausch and across Folsom Street on both sides of the alley. Streetlight poles along Folsom Street between Seventh and 11th streets will sport plastic films the color of the leather flag that include the cultural district's logo.

And 14 sidewalk plaques marking historic LGBTQ business locations will also be added along that stretch of Folsom Street. The bronze markers are part of a larger project the cultural district is undertaking to recognize the locations of more than 100 various LGBTQ bars, shops and bathhouses that once operated in SOMA, as well the sites of the 12 remaining such establishments in the area.

The district is seeking an estimated $120,000 to pay for at least 50 of the plaques from the community impact fees the developer L37 Partners is required to pay for its 244-rental unit housing development in SOMA. The project is to be built at Folsom and 11th streets adjacent to the gay nightclub Oasis, which should be receiving a sidewalk plaque of its own someday.

"We are delighted to have those things approved," said Goldfarb. "We look forward to having them on the street."

Construction on the project is slated to begin next summer and be completed within 30 months. The public realm elements will be added in 2023 at the earliest, as they will be some of the last pieces installed.

"When you think about Japantown and all of that stuff that lets you know you are in Japantown, and when you are in Chinatown you have that beautiful gate at the bottom of Grant Street that leads you into an entire community of Chinese people and businesses," said Langmuir, "so we are looking at having some kind of streetscape that identifies the center of our district and tells you this is a leather neighborhood."

Langmuir, the IT director for TNDC, which oversees the residential building at the corner of Folsom and Dore streets, noted the leather streetscape elements will complement the San Francisco South of Market Leather History Alley on the segment of Ringold Alley that parallels Folsom Street between 8th and 9th streets. The installation includes bootprints honoring men and women who made a lasting contribution to the city's leather community.

"I think people will come there and have their picture taken there as tourists," said Langmuir.

It will also add to the leather-themed placemaking created by the Eagle Plaza, which is close to being 100% complete. It includes a large flagpole where a leather flag is now being flown seven days a week and can be seen along with the gigantic rainbow flag above Harvey Milk Plaza from certain vantage points in the city.

The flag had gone missing earlier this year when the cultural district had to remove it for repairs. It is in the process of buying a second flag so there is an alternate to fly should the first one need to come down again.

For updates about the LeatherWalk, bronze markers, and the Folsom Street project, visit the cultural district's website.