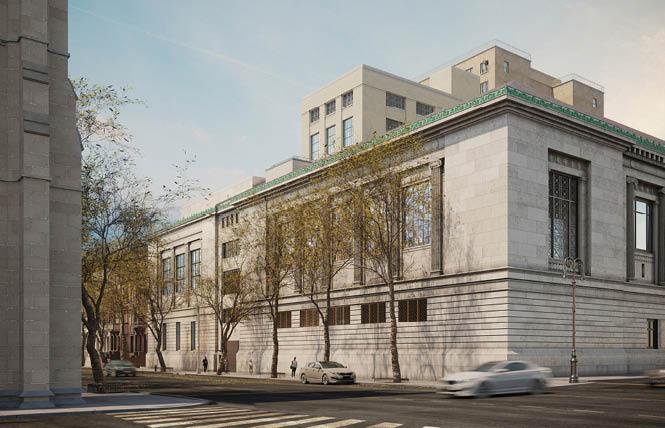 A rendering of the New-York Historical Society's expansion project, as seen from Central Park West, will include the American LGBTQ Museum. Photo: Courtesy Alden Studios for Robert A.M. Stern Architects via NBC News

Four months after going public with their plans, the board members of the New York City-based American LGBTQ+ Museum have begun the process to hire its first executive director. The person will assist with the effort to open the museum in 2024 under the current timeline.

The new LGBTQ institution announced itself this winter with a March 2 tweet declaring it to be a "new collaboration dedicated to preserving, researching, and sharing LGBTQ+ history and culture." At the time it pledged to have a physical presence in New York City that was "vibrant and welcoming, both visually and cognitively, for the entire LGBTQ+ community."

In late June the museum revealed it had entered into a partnership with the New-York Historical Society. As part of a 70,000 square foot expansion the society is undertaking, it agreed to dedicate the entire fourth floor of the five-story addition it is building to the American LGBTQ+ Museum.

"Suddenly we've reached this moment, a tipping point where more and more people are saying, 'We better record this history, integrate it and celebrate it before we lose it,' And so, in 2017, in January, a group of us got together in a living room and began having this conversation," Richard Burns, the LGBTQ museum's board chair, told the New York Times.

As the paper noted in its June 30 article, it will be the first museum dedicated to LGBTQ history and culture in the nation's largest city. There already is the Leslie-Lohman Museum of Art in Manhattan's SoHo district that is the only dedicated LGBTQ+ art museum in the world.

Now the American LGBTQ+ Museum has engaged executive search and strategic advising firm Koya Partners to assist it in finding a founding executive director. The person's salary will be between $150,000 and $200,000, based on experience level, and come with "a generous benefits package," according to a nine-page position profile it released this month.

"The executive director will bring a dynamic and entrepreneurial approach and will demonstrate an understanding of and sensitivity to the complexity of the position," it states. "The person in this role will appreciate the diversity of our communities, particularly those who have historically felt disengaged from traditional museums, as the American LGBTQ+ Museum aims to rethink the definition of a contemporary museum."

In a phone interview July 16 with the Bay Area Reporter, Burns said, "I will be very happy if we have someone in place by the end of the year."

SF queer museum
The news of the East Coast institution comes as San Francisco leaders have budgeted $12 million toward the acquisition of a site for the first large-scale freestanding LGBTQ museum anywhere in the world. As the B.A.R. first reported in June, San Francisco Mayor London Breed included the funding allocation in her budget proposal for the 2021-2022 fiscal year that began July 1. The Board of Supervisors is expected to have a final vote on the budget July 27 so the mayor can sign off on it by August 1.

The GLBT Historical Society has long wanted to acquire a site somewhere in the city, preferably in the Castro LGBTQ district, to build its own museum and possibly an attached archival center. It currently operates the GLBT Historical Society Museum in a subleased storefront on 18th Street in the LGBTQ neighborhood and a separate archive and research space downtown on Market Street.

There have been plans for an American-focused LGBTQ museum since at least 2008 when Tim Gold, the husband of furniture manufacturer Mitchell Gold, founded a board to build what was dubbed the National LGBT Museum in Washington, D.C. In 2015, the board announced it had determined the facility should be sited in New York City and had brought on Gay, Lesbian, and Straight Education Network founder Kevin Jennings as its co-chair.

While a website for the project continues to exist online, it has gone dormant. (The Golds now run Tim Gold Dog Training out of their home in North Carolina.)

The board missed its goal of opening a museum in time for the 50th anniversary of the Stonewall riots in June 2019. The uprising against police brutality at the gay Stonewall Inn is credited as the birth of the modern LGBTQ rights movement.

Burns, a gay man who is currently the interim CEO of the New York-based Johnson Family Foundation, had taken part in the conversations about establishing the earlier museum. When that effort folded, he helped organize a new group to push forward on the concept of establishing the American LGBTQ+ Museum.

That October the LGBTQ legal advocacy organization hired Jennings, who had been serving as president of New York's Tenement Museum, as its new CEO. He has leant his advice and support to the board working on the new LGBTQ museum effort, said Burns.

"Kevin Jennings has been a tremendous inspiration for us and helpful cheerleader," Burns said.

In recent years greater awareness has been brought on LGBTQ history and the need to educate people about the LGBTQ community. California state officials mandated LGBTQ subjects be taught in schools, while various cities across the country have undertaken historical preservation projects to understand and document their local LGBTQ history.

The National Park Service also conducted a national survey on American LGBTQ history and has taken steps to protect and preserve LGBTQ historic sites across the country, such as its Stonewall National Monument in Christopher Park in front of the bar, which is a national historic site. Previously hidden or ignored connections to LGBTQ history have been unearthed at various sites on the National Register of Historic Places.

And as the B.A.R. noted in October for LGBTQ History Month, new archival efforts launched in the South and Midwest to preserve LGBTQ history and ephemeral objects in those regions of the country.

The Manhattan-based LGBTQ museum describes itself as "a justice-focused and forwardthinking organization that approaches the history, activism, and culture of the LGBTQ+ movement as an integral piece of the American fabric." It intends to create exhibits that could travel to other institutions and has already begun hosting digital programming.

It already has a part-time administrative staff member, and the person hired to be the executive director will be responsible for bringing on additional personnel. In addition, they will be tasked with assisting the board in its fundraising and strategic planning for the museum.

The board also expects the person to "develop strong and deep collegial relationships and partnerships with existing and emerging LGBTQ archives, oral history projects, and museum efforts around the country and the world." The executive director will also help determine if the museum should create its own collection, and if so, of what archival materials, as Burns stressed the institution doesn't want to compete with the existing LGBTQ archives across the country.

It plans to hire an archival consultant in 2022 to do a survey of the current holdings in the various LGBTQ archives to see if there is a void the New York museum could help fill, said Burns. One focus could be on preserving the papers and holdings of the Stonewall and post-Stonewall generation, as it is an era in need of having materials and ephemera be preserved according to a survey the museum board did with queer academics and historians.

"We view this museum effort very specifically as part of the LGBTQ movement for equality and liberation," said Burns. "We want to create a museum that is a very friendly partner and collaborates with every queer archive, oral history project, and museum project in the country."

He added that the museum intends to be "vigorous in our approach not to duplicate what people are already doing. Let's complement."

Those interested in applying can submit a cover letter and resume online or by emailing smilbauer@koyapartners.com

All nominations, inquiries, and discussions will be considered strictly confidential, according to the firm.

To learn more about the American LGBTQ+ Museum, visit its website.