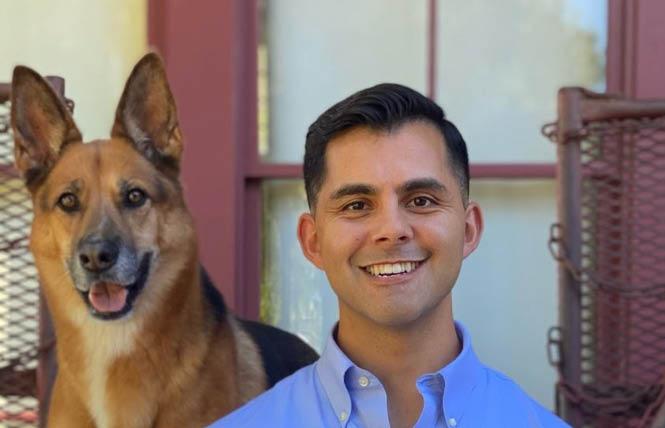 A gay Latino veteran who fought the military's homophobic "Don't Ask, Don't Tell" policy and has ties to San Francisco is seeking to be elected to a Southern California congressional seat. Should he win, Joseph C. Rocha would be the second out Democratic person of color elected to Congress from the state.

Rocha, 35, who lives in Escondido with his dog Daytwa, officially launched his campaign July 7 for the Golden State's 50th Congressional District. He is aiming to oust the Republican incumbent, Congressman Darrell Issa, from his suburban seat northeast of San Diego.

Their 2022 contest is expected to be one of the most closely watched in the state next year. Also running are Democrat William Stephen Houlahan and former Escondido mayor Sam Abed, a Republican, with the top two vote-getters regardless of party in the June primary advancing to the November general election.

"I am looking forward to talking to voters in this district about Issa's lack of leadership. I am convinced we will come out on top in the primary," said Rocha in a phone interview with the Bay Area Reporter Thursday.

At the time neither lived in the district, formerly represented by disgraced congressman Duncan Hunter (R), who resigned after pleading guilty to stealing campaign funds. Rocha told the B.A.R. not only is he ready for the tumult of a political campaign but that voters in the district are ready for a candidate focused on their needs.

"We have a country and a district that is really struggling and residents who need an emphasis on recovery and how they can best provide for their family as we make our way out of this pandemic," said Rocha, who plans to focus full time on his campaign. "Those dirty tricks are just not going to work anymore for the congressman."

Rocha's decision to move back from Marine Corps Base Camp Lejeune in North Carolina after satisfying his eight-year commitment with the United States Marine Corps, in which he served as a judge advocate, has riveted San Diego political circles. Longtime gay San Diego commissioner and newspaper columnist Nicole Murray Ramirez told the B.A.R. that he has been fielding phone calls from intrigued Democrats and Republicans since the news about Rocha's candidacy broke Wednesday.

He noted that the congressional district has a large bloc of veteran voters who are likely to be impressed with Rocha and his resume. There is also a sizable Latino population in the district, which reaches into southern Riverside County.

"I think that Marine captain Joseph Rocha fits the district well," said Ramirez, who has long been close friends with him. "As a proud naval and marine veteran, a prosecutor, a judge advocate, and as a proud Latino man and a member of the LGBTQ community, he is poised to become a frontrunner to challenge Issa."

A 2016 graduate of the University of San Francisco School of Law, Rocha interned with the San Francisco District Attorney's office. He also served as a field coordinator on gay former supervisor Bevan Dufty's unsuccessful 2011 bid to become mayor of San Francisco.

"I guess what I can offer is sometimes you learn more from a losing campaign than a winning campaign, so he probably learned a lot from my mayoral campaign," noted Dufty, who is planning to host a local fundraiser for Rocha this fall. "Obviously, you are struck by how open Joseph is, how smart he is, how informed he is, and his passion around public service because of the hardship in his family."

Tough upbringing
Rocha's grandparents emigrated from Mexico in the 1960s and found work in California's tomato fields and canneries. His mother struggled with drug addiction and lost custody of Rocha when he was 7 years old after leading the police on a high-speed car chase.

"That was the end of the road for my life living with my mom," he recalled.

He and his siblings were raised in Riverside by his father, a truck driver. They had a falling out when Rocha came out of the closet at 17 and his father kicked him out of their house.

A year later Rocha enlisted in the Navy and served as a bomb dog handler in the Persian Gulf. But, in 2007, he was discharged under DADT due to his sexual orientation, having been hazed by fellow service members who suspected he was gay. Shortly thereafter Rocha's mother died.

"She struggled with substance use until my early 20s," said Rocha, adding that losing her "couldn't have come at a worst time. She passed away a few months after I got kicked out of the Navy."

He lent his story to the public, legal, and political fights to overturn DADT, pledging to re-enlist if the anti-LGBTQ policy were overturned. Meanwhile, he graduated first from San Diego City College then law school in the Bay Area.

Former President Barack Obama signed the bill repealing DADT in December 2010, leading Rocha to apply to the Marine Officer Candidate School. Having risen through the ranks of the Marine Corps handling a range of felony cases, Rocha said it was time for him to embark on his next career move.

"I served for years under the Trump presidency. I saw the transgender ban, the Muslim ban, and an insurrection," noted Rocha, referring to the bans against trans military members and immigrants from a number of Muslim countries imposed by President Donald Trump and the ransacking of the U.S. Capitol by his supporters on January 6. "I wanted to ... I felt called to a different type of service and a space where I could continue to make change in people's lives."

He and his father eventually reconnected, with the elder Rocha expected to help campaign for his son.

"We have a very adult relationship. He is my best friend," said Rocha. "He is just such a great example of how people can come around if you just keep your heart open."

Rocha is the fourth out congressional candidate from the San Diego area to mount a bid in the last few years. In addition to DeMaio the two queer women who sought the state's 53rd Congressional District seat last year — military veteran Janessa Goldbeck and former San Diego City Councilwoman Georgette Gomez — both came up short.

In addition to Rocha, another out Latino candidate in San Diego County is looking to break through a pink political glass ceiling next year. Gay Chula Vista City Councilman Steve Padilla, a Democrat and former police detective, is running for the 40th State Senate District seat. If elected, he would be the first out male state senator from the San Diego region.

Their candidacies are a signal of the demographic and political shifts occurring in San Diego County, where Democrats now hold all of the seats on the Board of Supervisors and Democratic former Assemblyman Todd Gloria in November became San Diego's first gay elected mayor and first person of color in the position.

As for Rocha's congressional bid, "I think this is a very winnable seat," said Dufty. "Joseph's military experience and public service in a place like San Diego really says something about who Joseph is. A lot of individuals are really impressed by what Joseph has accomplished besides his hardships he has faced and that he wanted to continue to serve even after the horrible treatment he experienced when he enlisted."

While his main focus over the coming months will be on meeting the voters of his district, Rocha acknowledged to the B.A.R. that he is aware the LGBTQ community across the state will be closely following his candidacy. So far the only other out candidate for Congress next year from California is Congressman Mark Takano (D-Riverside), who is seeking a fifth term representing the 41st congressional district.

"I certainly hope my sort of adversity and fighting and never giving up, even circling back later in life with my dad, serve as inspiration for others to wage their own battles in service of their country, of their communities," he said. "And I hope it is part of a positive wave across the country."

To learn more about Rocha, visit his campaign site. 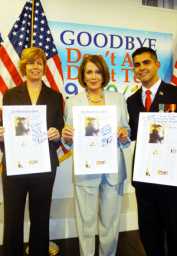 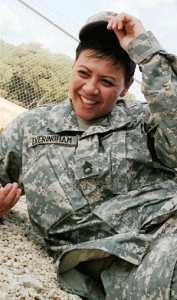