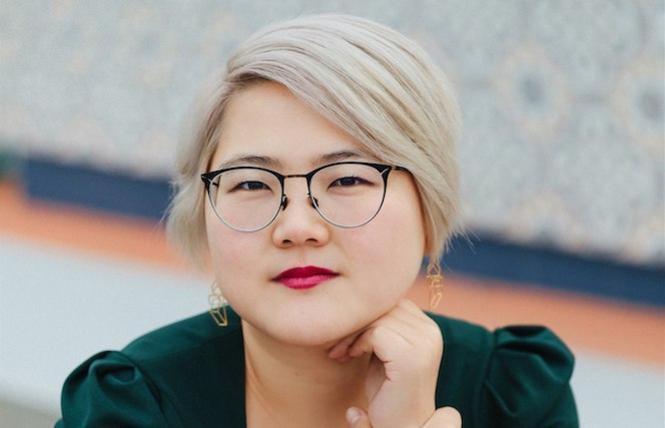 [Editor's note: During the summer, Out in the Bay is airing a mix of previously recorded shows and new content. This week is a rebroadcast.]

Quick — what's your sexuality? Most of us know roughly where we fall on the Kinsey scale that goes from zero (totally straight) to six (flaming queen or butchest of dykes). But have you considered another continuum, the asexual — allosexual one?

Science and technology journalist Angela Chen details it eloquently. Put crudely for space considerations though, the asexual-allosexual continuum has on one end folks repulsed by sex, and on the other end total horn-dogs, with most people — gay, straight, and otherwise — somewhere between those two extremes.

"The first myth [about asexuality] is that people think it's the same as celibacy, but it's not. Celibacy is a behavior," Chen tells us on this week's Out in the Bay — Queer Radio from SF summer rebroadcast. (The interview, first aired in February, was among Out in the Bay's most popular of the past year.)

"Asexuality is the lack of sexual attraction, not the lack of actually having sex," she said, adding that asexuality is a spectrum of experiences and that very few aces are sex-repulsed, as stereotypes lead us to believe.

A chief concept in "ACE" is how "compulsory sexuality" compels many of us to seek or consent to sex more than we really want to. Chen defines it as a "set of assumptions and behaviors that support the idea that every normal person is sexual, that not wanting (socially approved) sex is unnatural and wrong."

Compulsory sexuality doesn't harm only asexuals, Chen said. Her book explores how misconceptions about asexuality and generally overlooking it hurt us all by limiting our definitions of identity, pleasure, desire, consent and intimacy.

Hear more from Angela Chen on this week's Out in the Bay — Queer Radio from San Francisco. The program re-airs 9:30 a.m. Saturday, July 10, on KSFP, 102.5 FM in SF only, and is available anytime, anywhere on Out in the Bay's website. Out in the Bay also airs at 10 p.m. Tuesdays on KALW, 91.7 FM throughout the Bay Area.

Out in the Bay: Lauren Hough: 'Leaving Isn't the Hardest Thing'
Sign up!