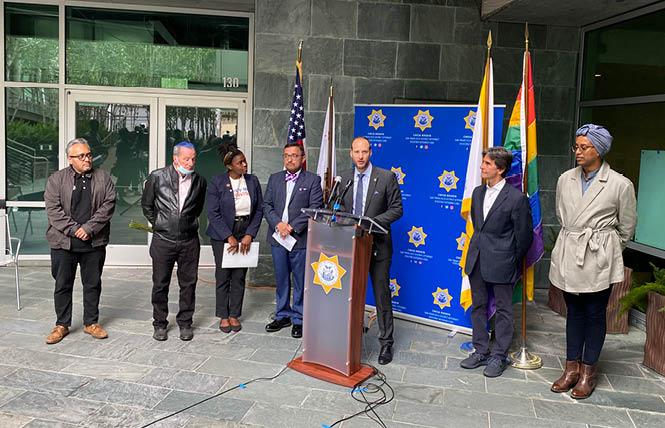 Staff at the San Francisco District Attorney's office will be required to ask all defendants their correct pronouns, as well as if they use a different first name than the one listed in the charging document or police report, according to a new policy announced June 30.

The policy, effective the same day, will also allow people accused of crimes to request that charging documents be changed to the name they want used, though "legal names will also continue to be listed secondarily on all charging documents for the purposes of criminal record-keeping."

The policy also has provisions to try to ensure correct pronoun and name usage for crime victims, survivors and witnesses.

"SFDA's intake division and/or charging [assistant district attorneys] will document any available information regarding any witness/victim's person's correct gender pronouns in the SFDA file," the policy states. "If a witness or victim's gender pronouns change during the course of a case, the assigned ADA will correct the pronouns in the SFDA file. If a witness or victim/survivor uses a first name other than their legal name that name will be documented and used by all staff."

Regarding defendants, however, the policy explicitly states "at or before arraignments or first court dates in all new cases, ADAs shall be required to inquire of all defendants (through their counsel when a defendant is represented) what the defendant's correct pronouns are, as well as whether the defendant uses a different first name than the one listed on the charging document and/or in the police report."

Rachel Marshall, Boudin's director of communications and policy adviser, said that the wording is different for the two groups "because we can speak directly to victims/witnesses to gather that information, whereas we are legally prohibited from speaking directly to defendants, so had to outline that process more explicitly since it has to occur in court."

At a news conference — held after a Pride party at District Attorney Chesa Boudin's office in the Potrero Hill neighborhood — the city's chief law enforcement officer said that it is the first policy of its kind in any California prosecutor's office.

The San Jose Police Department instituted a similar policy earlier this year, as the Bay Area Reporter previously reported. The San Francisco Police Department's policy differs from that of its South Bay neighbor in that legal names are used in its legal documents and police reports (though that's not all the department uses).Mayor London Breed ordered all city agencies and departments that collect demographic data to update their forms, both paper and electronic, so that they include the option of nonbinary in addition to male and female when asking about gender identity. The mayoral directive also ordered that the forms expand on title options beyond Mr. and Ms. and include additional choices for pronouns other than just she/her/hers and he/him/his. The forms had to also include a line for a person's preferred name and use gender-neutral labels such as "parent/guardian" instead of "father" and "mother."

Boudin was joined by several local LGBTQ leaders including Campos, a former city supervisor and immediate past chair of the San Francisco Democratic Party; Honey Mahogany, a queer nonbinary trans person who is the current party chair and an aide to District 6 Supervisor Matt Haney; Tom Ammiano, a gay man who is a former supervisor and assemblyman; Mark Leno, a gay man who is a former supervisor, assemblyman, and state senator; and Kaylah Williams, a bisexual woman who is the co-president of the Harvey Milk LGBTQ Democratic Club.

"Pride is such a pivotal part of who we are as a city," Boudin said. "There's a long, often-shameful history with law enforcement interacting with the community we celebrate today."

Boudin said the new policy will help hasten the end of that history, and cited data from the Los Angeles-based Trevor Project showing that trans and nonbinary youth who are referred to by their correct pronouns have a 50% less chance of attempting suicide compared with those whose pronouns were not respected.

"It is critical that transgender people feel safe, whether accused of a crime or the victim of a crime," Boudin said.

Boudin extended a warm thank you to Marshall, "for her leadership and innovation on this policy."

Third such policy in the US
During the news conference, Boudin claimed that this was the second policy of its kind in the United States. The first, he said, was implemented in Washtenaw County, Michigan, home of the city of Ann Arbor. Staff there under Prosecutor Eli Savit helped Boudin's office with the policy.

After the initial publication of this story, the Wayne County Prosecutor's Office in Michigan reached out to the B.A.R. to say that theirs was the first such policy. Enacted in 2016, Prosecutor Kym Worthy said that it was the basis for the Washtenaw County, Michigan policy.

When asked about this, Marshall told the B.A.R. July 6 that "We are so grateful for those who implemented similar policies before us and we are proud to join them in promoting inclusivity for all transgender and nonbinary persons."

Boudin's office also received the assistance of the Transgender Law Center, the National Center for Lesbian Rights and the San Francisco Office of Transgender Initiatives.

"Transgender Law Center is encouraged to see proactive change from the district attorney's office, as it's one of many steps that can be taken to better meet the needs of transgender people who historically are criminalized at high rates simply for being transgender and surviving," Shelby Chestnut, a trans and queer person who is the director of policy and programs for the Transgender Law Center, stated in a news release.

Imani Rupert-Gordon, a queer woman who is the executive director of the National Center for Lesbian Rights, contrasted the new policy with measures being taken in other states that are taking away rights from trans people.

"Every person who comes in contact with the criminal justice system must be treated with dignity and respect," Rupert-Gordon stated. "Given the epidemic of violence against transgender women of color, policies by government officials that protect transgender people are more urgent than ever. NCLR supports District Attorney Boudin in implementing these common sense protections for transgender and non-binary people who interact with the district attorney's office."

As a matter of fact, the B.A.R. reported on June 29 that the California Attorney General Rob Bonta announced the Golden State has added five states to its banned travel list for passing anti-LGBTQ laws since 2015, bringing the total number of states on the list to 17.

Clair Farley, a trans woman who is the executive director of the city's Office of Transgender Initiatives, said the administrative office is proud to have helped out in crafting the DA's new policy.

"We are proud to have consulted with the San Francisco District Attorney's office in drafting this new Gender Inclusion Policy that expands the use of chosen names and pronouns," Farley stated. "Trans and gender-nonconforming communities — specifically Black trans women — experience disproportionate rates of violence and engagement with the criminal justice system, and this new policy takes important steps in assuring trans residents are respected and feel safe."

Mahogany said at the news conference that there is still more to be done.

"It's so incredible how far we've come, especially in San Francisco, where we are actually working toward justice for all people," Mahogany said. "But there's a part of me so sad it has taken this long, and that it's the first policy of its kind in California."

Campos said that it reminded him of Ammiano's and Leno's fight on behalf of trans rights in the Legislature. Ammiano recounted the two working on Assembly Bill 1266, which in 2013 extended gender identity protections to public school students.

He said anti-trans forces fought against it tooth-and-nail, and even some in the LGBTQ community thought it was a back-burner issue.

"We come from San Francisco," Ammiano said. "Don't mess with us. We know what blood sport is."

When an aide to then-Governor Jerry Brown came to the floor of the Assembly to speak with Ammiano, he got nervous.

"We didn't know if the governor was going to support it or not," Ammiano said. "I thought 'Oh shit, I'm in trouble now.' But he [the aide] let me know that the governor would sign it. It showed us what could be done."

Leno called the new policy "constitutionally required." His successor in the state Senate, Scott Wiener, issued a positive statement in a news release.

"At a time where LGBTQ rights — particularly rights for trans people — are under attack across the country, it's critical that we, in San Francisco, lead on LGBTQ civil rights," Wiener stated. "This starts with the very basics: respecting people's gender identity. I applaud District Attorney Boudin's commitment to this goal in our courts; we must ensure people's pronouns and names are respected in every circumstance, including when they come through our legal system."

Updated 7/6/21: This article has been updated with additional comments from SFPD, the Sheriff's Department, and the DA's office, as well as clarifying that San Francisco is the third such jurisdiction to have such a policy in its DA's office.